Who Wins Over Time—Active or Passive? Depends on the Cycle 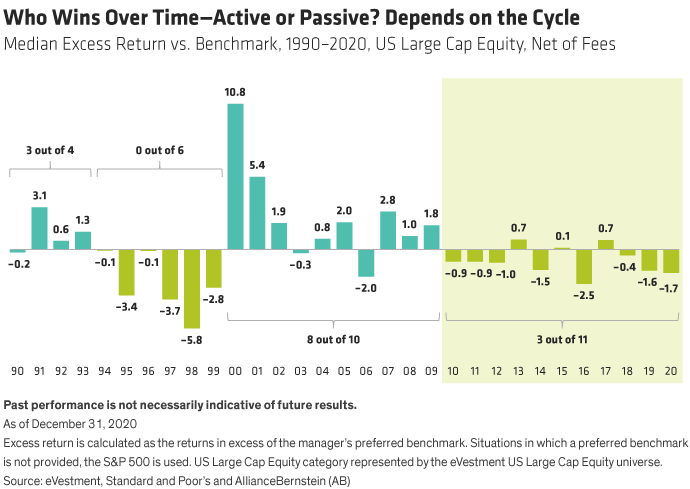 The Long-Running Debate—Active or Passive?

Oceans of ink have been spilled debating which is better in the long run: Active managers in search of market-beating stocks, or passive managers who simply mimic the market. Judging by the last decade, proponents of the passive camp seem to have the match sewn up. But is there more to the story than meets the eye?

The answer is less straightforward. While active managers overall have struggled in recent years, that doesn’t mean “case closed” for passive. More to the point, it may not even be the right question. Pulling back the lens to a 30-year period offers more insight.

Let’s Go to the Tape

The debate around active or passive management is at its most fervent when discussing US large-cap stocks. After all, managers who focus on beating the S&P 500—arguably the most representative benchmark for US equities—have had a tough go of it lately.

We analyzed the universe of active, large-cap US stock managers using a well-regarded industry database that compares the median (50th percentile) return, net of fees, versus the comparable index (Display). After grouping the bars into discrete cycles, we noted the number of times the median manager outperformed the index that year.

So, what can we conclude?

To Everything in Life, There’s a Season Cycle

Perhaps the first and most important takeaway is that neither approach (active or passive) wins all the time. While this chart only spans three decades, even longer studies come to the same conclusion—management approaches move in cycles. Sometimes conditions favor active stock pickers and it’s easier to gain an edge over the “market.” Other times, the reverse holds true.

For example, in the decade following the “dot-com” bust (2000 and following), active managers beat the index in 8 out of 10 years. Many produced sizable performance premiums, particularly early in the cycle as tech stocks came crashing down to earth. On the other hand, the years following the Great Financial Crisis, or GFC (2008–09), were a dry spell, with active managers only outperforming (at the median) in 3 of the last 11 years.

These are just the two most recent examples. But they illustrate a frequently overlooked fact—economic and market conditions heavily influence which approach emerges victorious during any given period.

What Environment Looms Next?

Fundamentally, neither approach remains inherently superior, though there are structural differences. For instance, active managers typically start from behind since their margin of outperformance must compensate for their higher fees. Meanwhile, the fee structure for most low-cost index funds and ETFs that track an index today is approaching zero. That’s a big edge.

Then there’s risk. Passive managers by their very design cannot shelter from gathering storm clouds on the horizon. Unlike active managers—who can minimize or avoid stocks whose fundamentals have detached from their prices—passive managers can only cross their fingers. In fact, they are often forced to buy more of those same stocks if their prices (and thus size) swell. When your job is to mimic the index, the larger (and more expensive) a stock becomes, the more of it you must buy to keep up with its rising share of the index. Investing on autopilot can be risky!

Structural differences aside, the case for one approach over the other must recognize that favorable conditions play a role (Display). In their absence, the bar is raised—no matter the inherent strength of the approach.

Let’s revisit our initial analysis and see how the current environment—bookended by the GFC and COVID—stacks up against the conditions we’ve outlined. How many are present?

These aren’t the only influences, and some are more important than others (e.g., the Federal Reserve). But the point is that conditions on the ground must be considered when judging the efficacy of each approach. A sweeping assertion that one always wins ignores both history and facts.

Oceans of ink have been spilled debating which is better over time—active or passive management.

But neither approach wins all the time.

Instead, economic and market conditions heavily influence which approach emerges victorious during a given period.