Will 2021 Mark the Launch of a Durable Global Recovery?

After a difficult winter, we expect the global economy to rebound strongly next year. But structural headwinds remain. Will the post-pandemic bounce trigger a durable and broad-based global reflation?

An Improved Outlook…But Not All Plain Sailing

Despite a chaotic end to the US presidential election, the global economic outlook has improved in recent weeks. The imminent rollout of COVID-19 vaccines has made it more likely that life will soon return to some version of normality. And Joe Biden’s election win has raised the prospect of a more predictable and conciliatory global trade backdrop.

It hasn’t all been plain sailing, though. Hopes for significant fiscal stimulus in the US have faded and a resurgence in COVID-19 is likely to weigh on European and US output growth over the winter. Europe is already set for another contraction—though not on the scale of the second quarter’s record drop—and the US could easily follow.

Overall, though, we think greater optimism is warranted. China and the rest of Asia have shown how quickly economies can recover once the virus is in check—provided that monetary and fiscal policy are sufficiently supportive. And a strong rebound in US and euro-area activity in the third quarter suggests that both could follow a similar trajectory once COVID-19 is finally under control.

So, the key question isn’t whether the global economy will rebound in 2021—barring an unexpected virus twist, that’s more or less a given. The question is whether it will last and be accompanied by a more broad-based reflation that includes higher inflation and rising bond yields.

Questions over the sustainability of the recovery may well be forgotten as growth picks up. But it’s worth recalling that the world wasn’t a happy place before COVID-19 struck. Productivity growth was weak and demographic prospects poor. Moreover, the longer-term outlook was overshadowed by three secular trends: populism, rising geopolitical tension between China and the West, and elevated debt.

It’s certainly possible that Joe Biden’s presidency could bring temporary relief (or apparent relief) on the populism and geopolitical fronts. But the roots of both run deep, and COVID-19 is more likely to entrench these trends than reverse them. Plus, there’s scarring from the pandemic to consider. So, while we’re optimistic on 2021 and even 2022, we would caution against thinking that a durable improvement in the longer-term outlook is likely.

Outside of the public health domain, we see two lasting legacies from the COVID-19 pandemic.

The first is the impact on government debt, which is being driven even further into uncharted territory, especially in advanced economies (Display). The second is widespread acceptance that fiscal policy is now the dominant economic policy tool, with monetary policy relegated to a supporting role—by keeping debt-servicing costs manageable. We’ve long expected this transition, but it is happening at breakneck pace. And it’s a short step from where we are today to outright fiscal dominance, more overt forms of monetization (like Modern Monetary Theory) and eventually higher inflation. 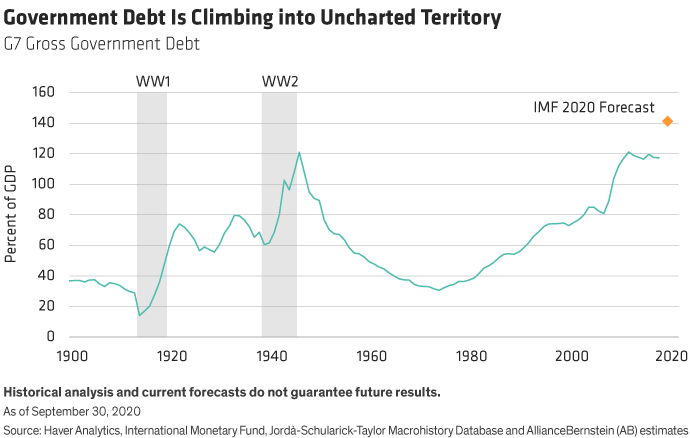 To be clear, we still think the pieces are falling into place for the shift to a higher inflationary regime, but we’re probably not there yet—especially if the US drags its heels on fiscal policy.

Can Bond Yields Stay So Low?

Which brings us to the burning question: What will happen to bond yields in 2021?

We’ve noted before that the world has entered a new era of central banking, one in which monetary policy’s overriding objective is to facilitate fiscal expansion by pinning bond yields at ultralow levels for the foreseeable future. We call this relationship “joined at the hip.”

This view will be tested as growth recovers. After all, aren’t bond yields unnaturally low? And don’t they always rise during upswings in the business cycle? Maybe. But there are three important counters to this line of thinking:

Central bankers are unlikely to describe their actions using our joined-at-the-hip framework—though the European Central Bank (ECB) has come close, suggesting that it needs to keep interest rates low to prevent fiscal expansion crowding out private-sector spending. Instead, they continue to anchor their actions in a conventional policy framework, by describing them as a shift in the reaction function aimed more squarely at delivering higher inflation.

Either route ends up in much the same place, though. The equilibrium interest rate is significantly lower than it used to be. And in the absence of compelling evidence that inflation has shifted durably higher, monetary policy won’t respond to higher growth and falling unemployment in the same way that it did in the past.

There are some easier and harder calls to make here.

There is, for example, virtually no scenario in which the world’s major central banks will raise policy interest rates next year. Likewise, it’s hard to see Japanese yields rising now that yield curve control is firmly cemented. And while the ECB has not yet formally adopted yield curve control, it is doing much the same thing in practice and simply can’t afford anything beyond a modest increase in core or peripheral bond yields.

The US Federal Reserve’s (the Fed’s) task is likely to be tougher, partly because the US bond market has not yet internalized the possibility that current yield levels might be “normal.” But the Fed has been very explicit about its new reaction function and its intention to run the economy hot in order to stoke inflation. Absent an increase in actual inflation or material shift in inflation expectations, it won’t have much tolerance for higher yields.

That doesn’t mean that US yields won’t rise next year. But it does mean that a return to pre-crisis trading ranges is unlikely. The Fed may be tested next year, but if it is, an old adage springs to mind: Don’t fight the Fed.

While the global economic outlook has improved, it's not all plain sailing.

A post COVID-19 rebound is likely, though secular headwinds to long-term growth remain.

The pandemic's two lasting legacies will be an acceleration in government debt and the dominance of fiscal policy.