Chinese stocks have tumbled amid a regulatory crackdown on education and technology companies. Despite mounting concerns about government intervention, we believe investors should stay invested in Chinese stocks, particularly in the onshore A-share market, where regulatory risks are relatively less acute.

Investors have been stunned by the speed and scale of the Chinese sell-off. The Hang Seng Index, which includes Hong Kong companies and offshore H-shares of Chinese mainland companies listed in Hong Kong, fell by 8.4% over two days through July 27 in US dollar terms, its biggest drop since the global financial crisis in 2008. Chinese technology stocks were harder hit, with the Hang Seng Technology Index down 14.2% in three trading sessions. Over the last month, the CSI 300 Index of A-shares has held up much better (Display). 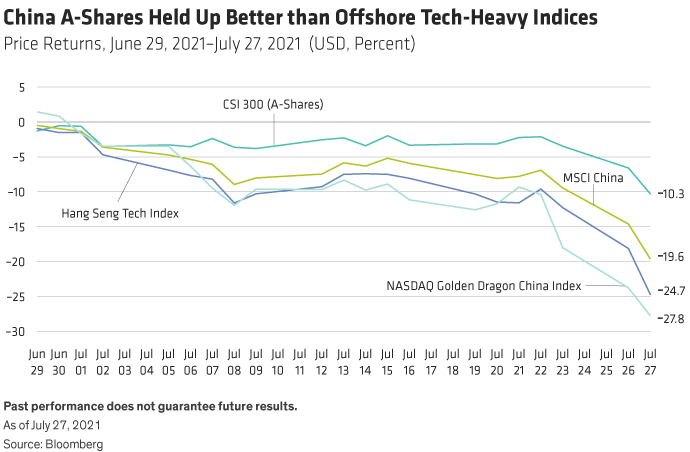 After leading world markets out of the COVID-19 crash in 2020, Chinese equities now face a new wave of negativity. For many investors, the unpredictability of Chinese government actions makes it seem almost impossible to set an appropriate risk premium for buying company shares.

The Trigger: Crackdown on Private Education

The crash was triggered by new regulation in the booming private education industry. Chinese regulators banned for-profit business in after-school tutoring, prompting a collapse in shares of private education companies that sent shockwaves through the market. These moves came on the heels of regulatory crackdowns in other industries, especially for companies in high-growth sectors such as e-commerce, food delivery and ride hailing.

Panic selling has been widespread. Investors appear to be pricing in the possibility that Beijing will tighten regulation in other popular sectors. And the sell-off has also spread to offshore China credit and currency markets.

Beyond private education, investors fear that large swaths of high-growth sectors that were market darlings in recent years could be vulnerable to government action. This explains why technology and property companies were also hit hard in the sell-off. We believe current government interventions appear to be focused on companies that are perceived as troublemakers in three areas.

These three points might seem harsh and unexpected to international investors. However, in historical context, assertive regulations are very much par for the course in the Chinese economy. In other words, we’ve seen this before, and frequently.

Aggressive regulation is partly the result of extremely rapid growth. In China, many industries developed so fast over the last two decades that government watchdogs were left scrambling to catch up. Regulatory frameworks often became obsolete as these industries and companies developed, and consequently, the rules had to be changed in a hurry after private businesses rapidly raced ahead and turned into giant entities.

Examples can be seen in many industries. In 2004–2005, regulators cracked down on small, poorly run steel mills that were disrupting the market. In 2008, Chinese food companies were targeted after a series of safety scandals. Banks were next in 2010, as regulators attempted to rein in the runaway growth in the banking sector’s debt load. And in 2016–2017, pharmaceutical companies were under scrutiny after a series of deaths from fake vaccines and drugs.

Advantages in the A-Share Market

The historical record doesn’t ease the pain of the current sell-off. However, we believe it provides important context on current volatility. For investors who may be reassessing their China allocations, we suggest taking a long-term view. Despite the recent spate of tough regulatory crackdowns, it’s also possible that the government may come out to calm the market and moderate the direction of regulations. Indeed, this happened in 2018, when President Xi Jinping himself came out to speak in support of private enterprises after a similar bout of panic selling in China’s onshore A-share market.

In fact, we believe recent events reinforce some benefits of the domestic A-share market. First, stocks listed in China’s home market are less likely to fall foul of regulations described above; there are no national security issues or variable interest entity (VIE) controversies for A-share companies. Second, many A-share companies are in mature industries such as consumer staples, industrials or materials, which already have a robust regulatory framework.

There is a flip side to the regulatory concerns. Although the market is anxious about the negative impact of new regulation, some industries and companies actually benefit from Chinese policies. For instance, China’s commitment to reach peak carbon emissions by 2030 and to become carbon neutral by 2060 has created a fundamental earnings tailwind to companies ranging from electric vehicle suppliers to solar energy equipment makers. Similarly, China’s strategic policy push to become self-reliant on technology is boosting domestic semiconductor manufacturers. Indeed, even as Chinese new economy stocks sold off in the overseas market, many companies seen as policy beneficiaries stood out with positive stock performance.

It’s impossible to predict the next phase of China’s regulatory focus. But with a clear framework in mind, investors can identify companies that are most vulnerable to regulatory action and either avoid them, or, apply higher risk premiums to fundamental analysis and buy them at an appropriate price. When the dust eventually settles on the current market mayhem, we believe China’s markets will still offer selective investors attractive opportunities in companies that enjoy solid business models and strong return potential, capable of overcoming regulatory hurdles to future growth.

Chinese stocks tumbled recently amid a regulatory crackdown on education and technology companies.

The recent regulatory interventions might seem harsh and unexpected to international investors, but in historical context, assertive regulations are routine in the Chinese economy.