Concerns about China’s slowing economy have focused on issues affecting property and manufacturing. But these are only part of the story. Investors seeking a fuller understanding of the risks and opportunities need to take a broader perspective.

China’s image as the world’s growth engine—particularly its role in helping to shore up the global economy after the 2008 financial crisis—remains etched in many people’s minds, even though the country no longer sees itself that way.

This may help explain misunderstandings about China’s slowdown, its policy actions and its growth outlook. For example, while growth in third-quarter 2021 is likely to be significantly lower than the second quarter, a big question mark hangs over growth in the fourth quarter and in 2022.

To understand these risks, we think it’s important to bear in mind that China today is concerned not just with growth but also other goals such as financial stability and the environment. Even investors who know this may not fully appreciate its implications, or how the various components of the overall policy framework can link to each other.

A good place to begin is to look at some of the forces that shape China’s growth outlook, and how they appear from a policy perspective.

Several factors have contributed to the slowdown in recent months, including floods and another round of COVID-19. Regarding the risks around the growth outlook, however, markets have primarily concentrated on two: regulatory interventions in the property sector and the impact of mandated power supply restrictions on manufacturing.

These sectors were key drivers of China’s economy during its single-minded growth phase but should now be seen within a broader policy framework that prioritizes financial stability and the environment, as well as growth.

The framework has resulted in more realistic GDP growth targets, and in policymakers no longer having to drive higher-than-desirable growth in some sectors (such as property or infrastructure), as used to be the case if GDP targets were above trend and rigid.

Importantly, under this framework, policymakers have tried in a pragmatic way to balance between goals and adjust policy proactively. They don’t have to persevere with one goal at the expense of another.

In this context, it’s important to consider organic growth drivers such as household consumption and private investment, as well as property and manufacturing. They all face subdued growth prospects in the short term, for different reasons.

Property and manufacturing are being constrained by government actions linked to the policy goals of financial stability and the environment. These measures may be adjusted to mitigate their short-term effects on overall growth, but any recovery in these sectors will be calibrated in line with the overall policy balance.

The broad growth outlook for next year will depend more on household consumption and private investment. But the incentive for households to consume remains weak, as suggested by the still-high saving ratio. And higher commodity prices have squeezed profits and created uncertainty for investment (Display). 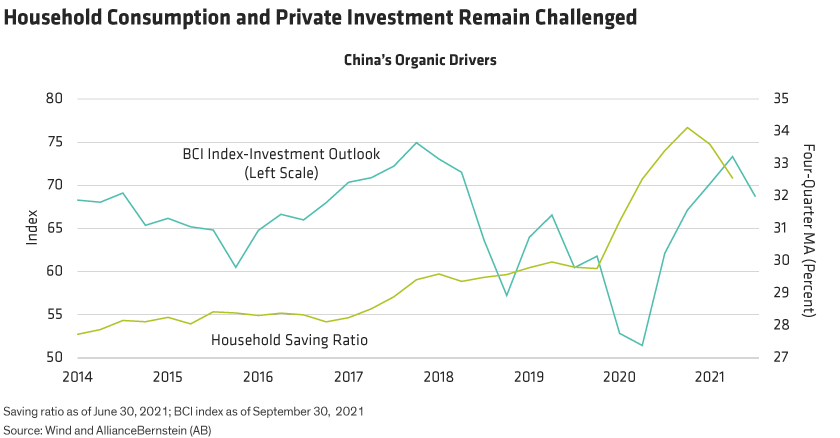 How are policymakers responding to these challenges?

A unique attribute of Chinese economic policy is that it normally has an explicit growth target. (An exception was 2020; the target was dropped after the pandemic slowed the economy.) Based on first-half performance in 2021, the above-6% target for the year has been easily exceeded. Does that mean policymakers will accept low sequential growth for the rest of 2021?

No, precisely because there is a growth target. Low sequential growth rates in the third and fourth quarters of 2021 will make it harder for policymakers to meet next year’s annual growth target unless they can generate sequential GDP growth in 2022 at well above trend.

The importance of the growth target is underscored by the fact that the government aims to double income per capita by 2035 (we expect the 2022 GDP growth target to be either around 5.5% or between 5% and 5.5%).

The question, then, is not whether policymakers will support growth, but how they will do so.

Clearly, they won’t rely on the property sector, where the policy priority has been to promote stability by dampening activity through regulation. (The risk of collapse has been mitigated by flexibility at the local level to release some suppressed demand from first-time home buyers, with banks providing support through a modest pickup in mortgage lending.)

We think support for growth will come instead from a number of policy levers. The most significant will be expansionary fiscal policy, such as the acceleration of budgeted spending and local-government issuance of so-called special bonds, which support public investment.

Also, we expect the People’s Bank of China (PBOC) to keep the currently mild policy rates unchanged, and to continue providing targeted liquidity to small and medium-size enterprises. While more emphasis on cyclical policy would be helpful for growth, we think large-scale stimulus is unlikely.

Against this background, we see reasonable prospects for fourth-quarter GDP in 2021 to rebound sequentially and for 2022 growth to be close to the potential growth rate (the rate at which the economy can grow over the medium term without generating excess inflation).

Given regulatory interventions in some business sectors this year, could our outlook for short-term growth be too optimistic? We don’t think so.

Not Just Growth, but Quality Growth

That’s because the government’s recent regulatory efforts and push for “common prosperity” have been largely misunderstood. They should be seen in the context of the government’s aim to achieve high-quality growth.

Recent interventions in the education and tech areas, for example, have been perceived as negatives for credit and equity markets, and for short-term growth. But they are better understood as part of a long-term strategy to promote high-quality growth by removing market distortions.

This is particularly important for China now, because its economy is at a key development stage, becoming more domestically focused with higher-value manufacturing, at a time of rapid domestic and external change (for example, the long-term effects of deglobalization on the country’s exports).

China is responding by pushing for structural reforms more aggressively than it has done in the past, to achieve a more sustainable and balanced growth trajectory.

Similarly, the recently revived common prosperity policy does not prioritize social equality at the expense of growth; rather, it envisages higher per-capita income and less inequality. One of the reasons for China’s relatively low consumption ratio, for example, has been widening inequality.

Over time, the common prosperity policy may help to narrow inequality, which would be a positive for household consumption—the organic growth driver mentioned earlier. This provides an example of how China’s various policy elements can connect with each other.

China’s goals today extend beyond growth to include other aims like financial stability and concern for the environment.

Yet even investors who realize this may not fully appreciate what it means, or how the various parts of China’s overall policy framework align.

The key is to view the government’s recent regulatory efforts and push for “common prosperity” as an effort to achieve high-quality growth.