Evergrande’s recent troubling financial news has deeply shaken investor confidence in the Chinese property developer. Now fears have spread beyond Evergrande to China’s other property developers, causing their bond prices to fall too. Is this China’s Lehman Brothers moment? Will the potential collapse of this single company trigger a systemic financial crisis?

We don’t think so. China’s policymakers have tools to ease funding pressures and restore investor confidence in the property sector. But before we look ahead to the measures Beijing is likely to take to stem contagion, let’s look at what’s happened thus far.

Evergrande is the biggest property developer in the developing world. Its debt of RMB 570 billion (US$88 billion) makes it one of the most indebted companies globally.

That debt has proven unwieldy. Despite meaningful debt reduction via asset monetization, Evergrande’s latest financials show a significant deterioration in liquidity. As a result, the company now appears to be on the verge of defaulting on its bonds. (It has 30 days since missing payments on September 23 before it will be considered officially in default.)

But Evergrande’s problems didn’t come out of the blue. Over the past decade, Chinese property developers had levered up their balance sheets with debt to fund aggressive expansion plans. As debt levels rose, regulators’ concerns about systemic risk rose too. To contain the risk, the government rolled out the “Three Red Lines” policies in 2020. These policies were designed to constrain further debt growth by requiring property developers’ balance sheets to stay within certain bounds relating to net debt-to-equity, cash to short-term debt, and liabilities to total assets.

The Three Red Lines forced many developers to deleverage. But as the most indebted developer in the group—and the world—Evergrande faced insurmountable headwinds in complying.

We believe that, in Beijing’s eyes, Evergrande doesn’t warrant rescue. That’s because no single property developer—not even Evergrande—is systemically important in the context of China’s huge economy.

First, despite the enormity of its balance sheet, Evergrande’s share of the Chinese housing market is only 4%, so it is not “too important” to fail. Second, authorities will wish to avoid promoting moral hazard by bailing out any one developer. And third, allowing unhealthy companies to fail furthers China’s goal of improving its corporate market’s overall health. That’s good for credit investors.

But while neither Evergrande nor its peers are systemically important on an individual level, China’s property sector, taken as a whole, is. Property developers and the sectors that depend on them, such as suppliers of heavy equipment and building materials, have total debts of RMB 101 trillion—amounting to 35% of China’s financial system and equivalent to 100% of the country’s GDP.

So, while individual property developers might be allowed to default or fail, Beijing is very likely to take steps to ensure that the fallout for the sector will be limited.

But they may not need to take such steps, at least not yet. Despite fear-driven weakness in parts of the offshore Asia credit markets, we don’t see signs of a systemic crisis, which would be evident in China’s onshore credit market and interbank market. For example, in recent challenging times for China—the trade wars in 2018, and the COVID outbreak of 2020—bond issuance activity plummeted, and credit spreads widened in the onshore market. This kind of response isn’t evident today (Display).

The interbank market, another indicator of systemic disruption, also appears to be behaving normally, with the interbank borrowing rate closely tracking the People’s Bank of China’s open-market operations rate (Display). 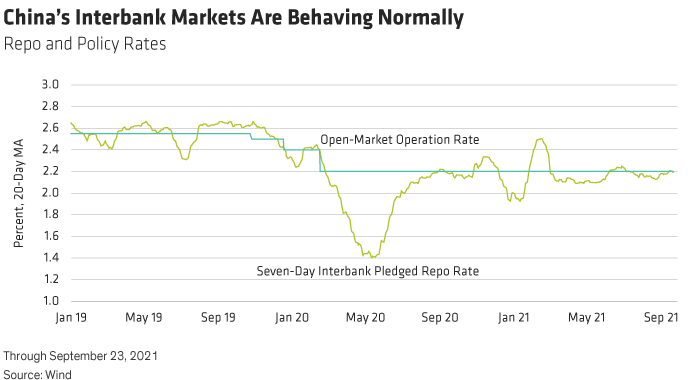 That said, we believe that policymakers in China stand ready to act, should signs of contagion grow. Through coordination with the large state-owned banks, and through potential policy adjustments, Beijing can help ease funding pressures for the property sector and help rekindle investor confidence.

We expect most property developers in China to muddle through this period of short-term volatility. However, financial market turmoil could prove self-fulfilling, if diminished access to offshore bond markets render property developers’ offshore refinancing unviable for an extended period.

Active investors should therefore look for issuers with the ability to weather extended market volatility. Typically, this means having access to other liquidity sources or owning quality assets that can be monetized, if necessary. Investors should also keep an eye out for potential opportunities, where bond prices have become distressed.

Lastly, during any tumultuous and uncertain period, it’s especially important to rigorously research each credit, since individual company defaults and debt restructurings are possible. And with China, that kind of research means also assessing the government’s willingness—or unwillingness—to let a given company fail. In other words, investors need to apply a systematic framework to better anticipate which companies Beijing considers systemically important.

The bottom line? Evergrande may be getting all the press, but to properly assess risk and identify potential opportunity in China’s credit markets, investors should look beyond the headlines.

There are no signs of contagion in China’s bond markets and its interbank borrowing markets are behaving normally.

While Evergrande may be making all the news, but to properly assess risk and identify potential opportunity in China’s credit markets, investors should look beyond the headlines.