For the Global Economy, It’s Next Stop…Policy Normalization

November is likely to mark the start of a transition phase for the global economy. For almost two years, major central banks have thrown extraordinary waves of support into shoring up economic activity and financial markets against the COVID-19-induced crisis. Now, officials in many countries seem ready to begin the march back toward a more normal policy setting.

At the conclusion of its November 3 policy meeting, we expect the Federal Reserve to announce the start of tapering: reducing the pace of its quantitative-easing purchases and signaling a return to using interest rates as the primary monetary-policy tool. The Bank of England (BoE) meets the next day, and may raise interest rates—or at least signal that a rate hike is imminent. Many smaller central banks are embarking on the same transition.

Why the change? We see both good and bad reasons. The good reason is that the world economy has, by most measures, largely recovered from the trials of the pandemic. US and global gross domestic product (GDP) are well on their way back to, or even above, precrisis levels. With growth recovered and likely to remain strong in 2022, there’s not as much need to lean heavily on policy support.

The bad reason behind normalization: surging inflation that has accompanied the growth recovery. Policymakers still expect the pace of climbing prices to slow—and we agree—but it’s been more intense and longer-lasting than initially expected. Commodity prices are rising and supply lines remain snarled, so it will likely take several more months before we see inflation come down meaningfully. The longer it stays elevated, the better the chances that long-term inflation expectations will shift up. That’s something central banks don’t want to see—inflation expectations can become self-fulfilling.

Fed, BoE, Other Central Banks: The Kickoff Is Imminent

Faced with strong growth and rising prices, central bankers around the world have signaled that the start of policy normalization is imminent: Fed officials have been clear that tapering is just around the corner. BoE Governor Andrew Bailey said that the country’s central bank will “have to act” in order to counter price pressures. Central bankers in other countries have signaled a readiness to raise rates or reduce asset purchases.

Financial markets have certainly gotten the message, with expectations for rate hikes over the next couple of years soaring over the past month (Display). Two-year government bond yields in the US, England and most smaller economies are the highest they’ve been since the onset of the COVID-19 pandemic. Even in markets where policymakers have been more cautious—the euro area and Australia, for example—rates have moved higher. Japan, of course, is an exception: there is no likelihood of rate hikes over an intermediate time horizon there. 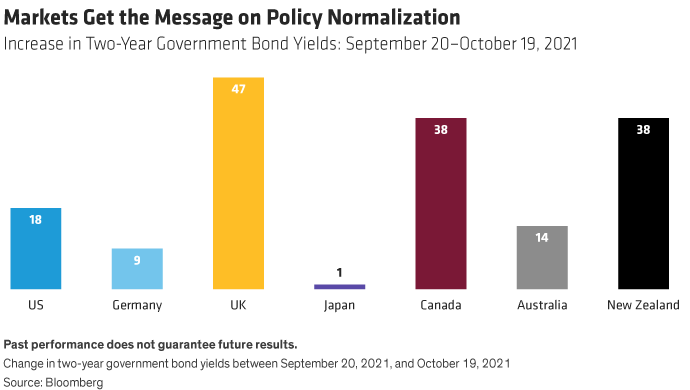 What Does a New Policy Path Mean for Investors?

Because extraordinary monetary support has been a key underpinning of strong financial markets, waning support means that the road ahead will probably be choppier, as we see it. But to keep things in perspective, even after normalization begins, policy will remain accommodative for a long time: interest rates are still extremely low historically and will be low even after central banks start resetting the levers.

Despite their recent recalibration, financial markets still expect the US policy rate to be under 1% for almost two years, for example. That’s hardly restrictive by any historical measure. And the underlying economic growth outlook remains strong—enough to withstand higher rates, based on our assessment. That makes higher interest rates a reflection of how far the global economy has come in recovering from the COVID-19 crisis, not a cause for alarm.

Central bank officials in many countries appear poised to begin the march back toward a more normal policy setting.

Yet even after normalization is underway, accommodative policy is likely to persist in the form of historically low interest rates.