The Fed Will Likely Taper…but Don’t Expect a Tantrum

With the US economy accelerating and price pressures rising, investors have started wondering when the Federal Reserve will start to wind down, or taper, its current QE asset purchases—a pillar of accommodative monetary policy since the global financial crisis. We don’t think a taper is imminent: it likely won’t happen until later this year. While that may be a few months earlier than we previously thought, it still won’t come as a shock to the market.

A taper would be only the first step on the path to an eventual interest rate hike, which we still think is unlikely until late 2022 or even 2023, depending on the economy’s trajectory. In our view, the justification for starting to reduce asset purchases later in 2021 is simple. Real yields—the difference between stated bond yields and expected inflation—have declined over the past couple of months. Bond yields are up, but inflation expectations are up more.

Because it’s real yields that matter to the economy, their decline since mid-March (Display) means that monetary policy has become even more accommodative, just as the economy is accelerating. We don’t think the Fed wants to tighten, but it’s not a stretch to say that the central bank probably doesn’t think more easing is necessary at this point in the COVID-19 rebound. 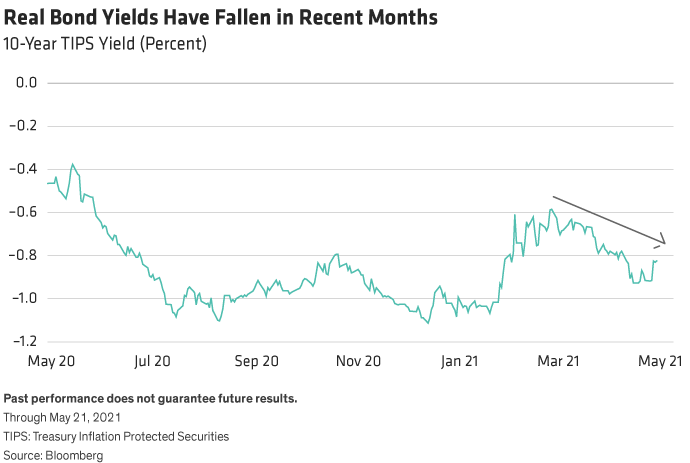 Essentially, lower real yields give the Fed more flexibility to taper—and allow nominal bond yields to rise toward our 2.0% forecast—without tightening monetary conditions meaningfully. That formula should keep the expansion humming, even as asset purchases begin to slow.

But when will tapering start?

The Fed’s bar is “substantial progress” toward its mandate of full employment, as well as price stability. With more than 8 million fewer people working now than before COVID-19 in January 2020 (Display), that hurdle remains. The Fed has been clear that it needs tangible evidence of improvement, not just forecasts, so we think tapering won’t start until the fourth quarter, by which time we expect the labor market to have made substantial progress. 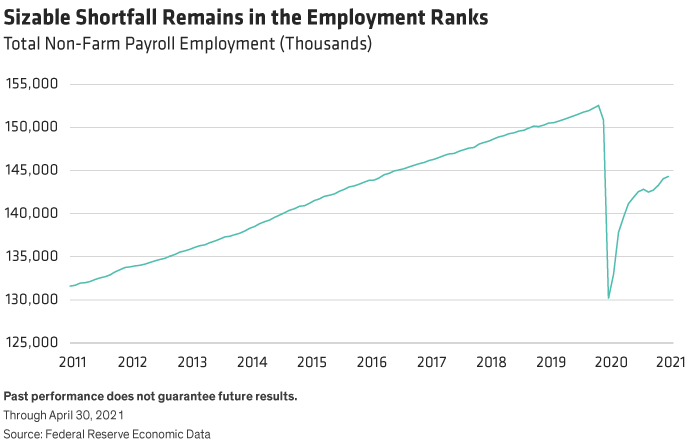 Lesson Learned from the 2013 Taper Tantrum

There’s been some anxiety in the investment community, with many recalling the 2013 “taper tantrum” that saw bond yields spike. We don’t think the taper itself triggered that tantrum—it was the surprise turn in monetary policy. The Fed has learned from that error: this time, it will lay the groundwork well in advance to avoid surprises. Yields may rise gradually—as we expect—but we don’t foresee a tantrum.

Tapering will be only the first step on what will be a long path toward monetary policy normalization. The Fed will probably slow the pace of its asset purchases (currently $80 billion in Treasuries and $40 billion of mortgage-backed securities per month) gradually—it will likely still be buying bonds well into 2022.

After QE purchases stop entirely, the Fed will continue reinvesting coupons and maturing bonds. And given the size of its holdings, it will be a meaningful player in bond markets for years to come. Once QE is done and this steady state has been reached, we expect the Fed to keep the policy rate at zero for several months before eventually embarking on rate hikes.

While the tapering might come a few months earlier than we previously thought, it still won’t come as a shock to the market.

A taper would be only the first step on the path to an eventual interest rate hike, which we still think is unlikely until late 2022 or even 2023, depending on the economy’s trajectory.

The Fed’s bar is “substantial progress” toward its mandate for full employment, as well as price stability.