As equity style winds shift, investors are still debating the merits of growth versus value stocks. But we believe quality remains the essential focal point, especially amid a low interest-rate environment that has changed the math behind company valuations.

It’s been 40 years since a Volcker-led Federal Reserve pushed interest rates to record highs to fight an era of soaring and economically stifling inflation. Since then, however, rates have steadily fallen. Today, largely led by central bank policies, interest rates have flatlined at historical lows. Investors have had almost no influence over this trend, but it has had a major impact on the prices of financial assets.

As the saying goes, “time is money.” The further out investors look, the harder it gets to gain confidence in either the quantum or timing of an asset’s cash flows. And that’s only if there are any; Bitcoin, for instance, offers no cash-flow streams.

So, the “discount” component of DCF analysis is a discount rate to reflect the fact that money received in the future is worth less than money in hand today. Discount rates are not uniform across assets. They attempt to account not only for time but also for varying degrees of risk associated with their very different cash-flow streams.

The historically low “risk-free” rate environment—primarily represented by US Treasury yields—is further compounded by higher current investor risk tolerance, which arguably is why valuations are running so hot. But this means risk spreads are also lower than normal at a time when investor risk tolerance is greater than ever as they stretch for income. In fact, average spreads between high-yield bonds and the risk-free 10-Year US Treasury have narrowed to 2.9%, nearly a 20-year low (Display). 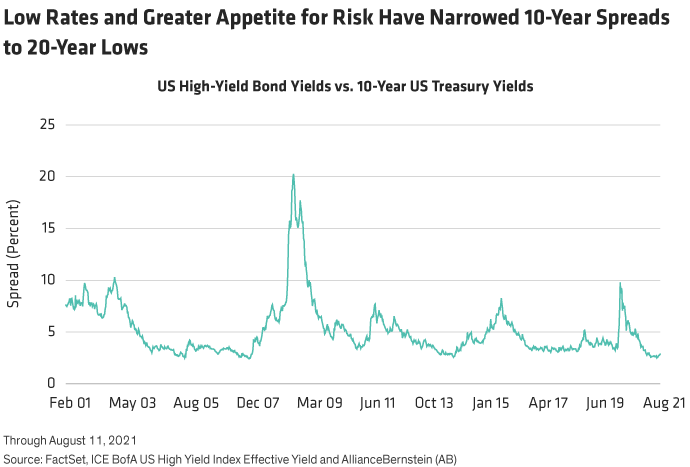 That being said, investors are getting paid way less to take a given amount of risk than in the past, independent of the underlying risk-free rate. While many investors used to think about a 10% or higher weighted average cost of capital to assess long-term asset values, today many assets appear to be discounted using rates of just 5%, or lower.

To some extent, investors’ seemingly higher risk tolerance might simply be an illusion. Many investors, and especially passive investors, are far removed from the assessment of a company’s value. For example, participants in US 401(k) retirement plans are a huge part of the equity market investor crowd. But they’re likely to have limited connectivity to the valuation of (or put differently, the yield on) the assets they are acquiring with each contribution or account rebalance.

Future cash flows have never been worth more than they are today. But all companies, or assets, haven’t benefited equally. Due to the power of compounding, companies that generate more of their lifetime earnings or cash flows further out in the future get a bigger benefit than companies generating more of their cash flows sooner. Cash flows of higher-growth companies, for example, are typically generated much further in the future than those of lower-growth companies. That’s why an increase in the discount rate used to calculate the present value of cash flows disproportionately lowers the fair value of higher-growth stocks more than low-growth stocks, and this spread widens as rates rise (Display left). 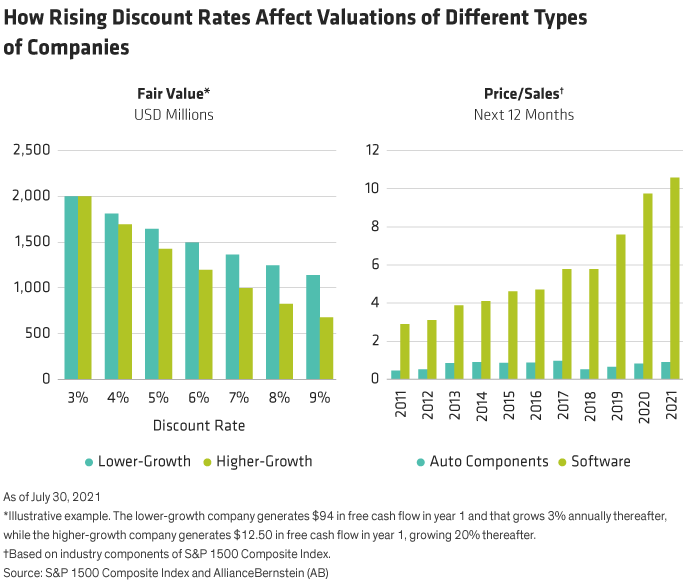 Such divergence is also seen across whole industries or subsectors. For instance, the price-to-sales ratio—a company’s market capitalization divided by its sales—has risen sharply for software companies as discount rates have fallen. By contrast, it hardly changed, or “rerated,” for the auto components sector (Display right). This shows the relative discount rate applied to software has fallen more than it has for auto components, but if rates rise, we believe that benefit will begin to reverse.

This especially applies to early-stage growth companies, where there is less (if any) free cash flow available to shareholders in the short to medium term. Such companies offer characteristics that are similar to bonds with longer durations (i.e., maturing in 10 years or more), as their weighted cash flows are received further out than companies that are more profitable today. These companies, and long-duration assets in general, have benefited from many years of falling rates compared to more mature companies. Importantly, the relative benefits have increased as rates have fallen. Mathematically, when rates drop from 5% to 4%, the benefits to long-duration assets are greater than those if rates fall from 10% to 9%.

Rates Set the Tone, But Quality Should Guide Selection

We live and invest in a seemingly more disruptive, competitive environment than ever, while inflation pressures are also accelerating. This can be seen very clearly in places like the US housing market and across durable goods. Combined with long-term risk-free interest rates that sit today near 1%, and tight risk spreads, it’s unlikely that discount rates will fall much further. For high-growth stocks with limited current profitability, the elimination of the rate-driven tailwind arguably looks like a relative headwind.

If rates increase just moderately, both high-quality and value stocks with less reliance on cash flow generated well in the future stand to benefit on a relative basis. Ironically, rising interest rates might have very little impact on a company that is already pricing in a finite lifespan, such as an upstream oil and gas producer.

Nobody knows where interest rates will head. But as economies further cycle from recovery to expansion, it’s especially important to lean in to consistent, highly profitable business models. There is evidence that highly profitable companies, as measured by return on assets (ROA), tend to stay that way for multiple years, while less-profitable ones are more likely to falter.

We believe that profitability-based metrics, such as ROA or return on invested capital, will be especially telling of quality business models if interest rates rise (thereby increasing the cost of capital and the discount rates used to value future cash flows).

As economies continue to improve and lift markets to higher valuations, investors will need to focus on companies with resilient business models that can deliver solid returns in the post-pandemic world. And when quality is at the heart of fundamental analysis, investors can create portfolios with the potential to deliver more consistent performance across changing economic cycles.

Quality stocks should remain the essential focal point for investors, especially amid a low interest-rate environment that has changed the math behind company valuations.

Profitability-based metrics, such as return on assets (ROA) or return on invested capital, will be especially telling of quality business models if interest rates rise.

As economies continue to improve and lift markets to higher valuations, investors will need to focus on companies with resilient business models that can deliver solid returns in the post-pandemic world.