What to Expect When You’re Expecting a Taper

Many investors, perhaps scarred by 2013’s “taper tantrum,” are focused on the likelihood that the Federal Reserve will start reducing its bond purchases in the next few months. We don’t think the taper will be disruptive—the Fed has learned from the market’s adverse reaction to that surprise policy turn. But we do see a taper coming soon.

Here’s our thinking on four big questions on investors’ minds:

When Will the Fed Start Tapering?

We can’t truly be confident that the market will take the taper in stride until the taper actually starts. Last December, the Fed indicated that tapering would begin after “substantial further progress” toward the central bank’s employment and price-stability objectives.

With inflation above target, this stage of the cycle is all about the labor market (Display). The US economy has added close to 4 million jobs so far in 2021, including nearly a million in July alone. Especially strong August numbers might trigger a taper announcement at the Fed’s September meeting, but we think the risk of labor-market complications from the COVID-19 Delta variant are more likely to result in a wait-and-see stance. 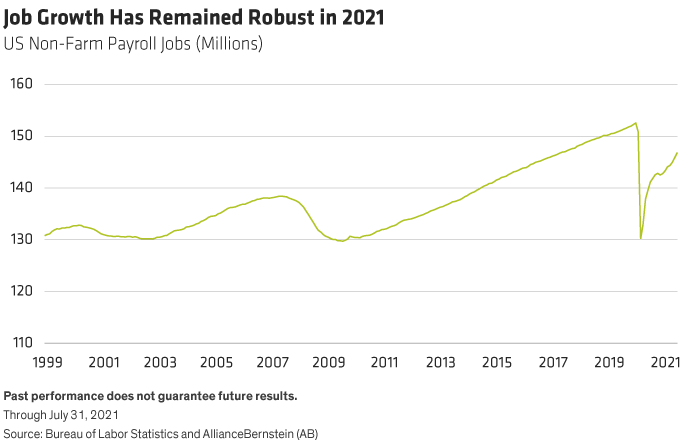 Early indications are that the Delta variant won’t throw a wrench into the labor market, and we expect strong performance to continue as summer turns to fall. Based on this assessment, we still expect a taper announcement to happen at one of the Fed’s fourth-quarter meetings this year.

How Will the Fed Engineer the Taper?

Some Fed leaders advocate equal reductions, stopping MBS purchases faster as a means to reduce support for an already surging housing market. Others—including some of the more influential leaders—don’t feel the same sense of urgency. They advocate the second option, with proportional tapering. Market expectations have coalesced around the proportional approach.

How Fast Will the Fed Taper This Time Around?

In 2014, the Fed started to taper in January and finished 10 months later. So, it’s not surprising that most onlookers expect the same pace in this iteration, which would require reducing treasury purchases by $10 billion per month and MBS by $5 billion. This seems like a reasonable baseline expectation, though the risks—and some Federal Open Market Committee members—lean toward a speedier taper, given the much faster economic expansion and more aggressive fiscal policy.

Or the Fed could elect to adjust the pace along the way, starting slow and then accelerating if the economic situation warrants. While we expect the Fed to indicate that the pace of tapering is flexible in theory, in practice we expect that the bar to alter the rate will be relatively high, as it was last time. That said, investors should remember that nothing is set in stone and that circumstances could force the Fed to change its plans.

In our view, the most powerful part of quantitative easing (QE) from a monetary policy perspective is the signaling effect: investors assume (correctly, we believe) that the Fed won’t raise rates while engaged in QE. The market’s extremely high confidence that the policy rate will stay at zero and interest rates will remain generally low during QE has bolstered both markets and the US economy.

The Fed leans into that confidence, having indicated repeatedly that rate hikes are unlikely on the heels of ending QE. More than a year elapsed between the end of QE in October 2014 and the first rate hike in December 2015; the pace will probably be faster this time, given rapid growth and accelerating inflation. Markets price the first rate hike as happening in the first quarter of 2023—roughly six months after tapering seems likely to wrap up. That’s a very long way away, of course, and a lot can change.

While the elapsed time between Fed tapering and interest-rate hikes may be different from 2014, there’s one key aspect of QE that we don’t see changing: the Fed is highly unlikely to unload the bonds it has already purchased (Display), leaving a massive portfolio of securities. 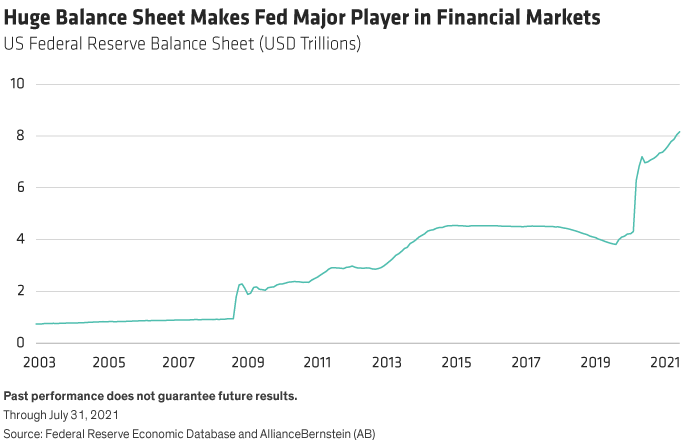 In the wake of the global financial crisis, the Fed’s balance sheet doubled from $1 trillion to $2 trillion, and continued to grow rapidly in the ensuing years, topping four trillion in the years preceding COVID-19. The response to the pandemic doubled the Fed’s balance sheet yet again, to just over $8 trillion today. That scale makes the Fed a major debtholder that can have a sizable market impact.

So, it seems abundantly clear that, even if QE may end in relatively short order, the Fed is going to be a major player in US financial markets for many years to come.

While we see a bond purchase taper coming soon, the Fed learned from the market’s adverse reaction in 2013 to a surprise policy turn.

The Fed’s priority is to avoid disruption, making the successful 2014 taper a logical starting point for mapping the approach this time.

Even if central bank bond purchasing ends in relatively short order, the Fed is going to be a major player in US financial markets for many years to come.