Why Investors Shouldn’t Take a Time-Out from High Yield

The US high-yield market has seen a strong comeback since its panic-driven downturn at the onset of the COVID-19 pandemic. But as today’s economic recovery gathers steam, a new fear has seized investors: rising bond yields.

Investors know that when yields rise, bond prices fall. So, should investors exit the high-yield market to avoid the next rise in yields, and return once it’s behind us? We don’t think so.

In fact, when we explore different investor stances under various yield scenarios, the bond math points to staying invested so as not to get sidelined. Here’s why.

With Bonds, Time (Invested) Is Money

Bonds are sensitive to interest-rate movements, and investors can initially suffer negative returns when yields rise. But if your investment horizon is longer than a few months, short-term losses probably don’t matter that much.

That’s because, when it comes to your bond portfolio, time heals most wounds. Not only do bonds provide income, but their prices migrate toward par at repayment (except in the case of default). That means investors who sit tight will be able to reinvest the principal and coupon income that their portfolios pay in newer—and higher-yielding—bonds. This can offset short-term losses and often increases total return.

Consider the four scenarios in the Display below. In the first three scenarios—rising yields, stable yields and falling yields—the investor stays put in a high-yield portfolio over the full investment horizon. In the fourth scenario, the investor stays out of the high-yield market as yields rise, then enters the market after two years.

The results of the four scenarios may seem surprising, for two reasons.

First, even though they enter the market at a higher starting yield, the investor who remains on the sidelines while yields rise underperforms the fully invested participant under the same rising-yield scenario. This illustrates the power of yield plus time.

Second, for the fully invested participant, the rising-yield scenario outperforms the falling-yield scenario, while stable yields create the best performance conditions. That’s counterintuitive. Investors often root for yields to fall, since that generates an extra price boost. But the resulting lower yields put the portfolio at a disadvantage.

Does this mean high-yield investors should actually root for yields to rise? Not necessarily.

It all depends on timing. If yields fall, you’ll want that to happen as close to the end of your holding period as possible. That way, companies won’t refinance their bonds with new, lower coupons, hurting your portfolio yield. Conversely, if yields rise, you’ll want that to happen early in your investment period, since you’ll benefit from higher reinvestment yields sooner.

What About the “Big One”?

Whether investors should root for yields to rise also depends on the size of the yield increase. The larger the yield increase, the bigger the price drop. We figure that yields in the high-yield market would need to rise by nearly a full percentage point over the next year for the market to post a negative 12-month return. Historically, yield increases that dramatic have been rare.

Nevertheless, we wanted to know what effect such a large increase would have on our hypothetical portfolios over our longer holding period. And it turns out, it doesn’t make a big difference (Display). 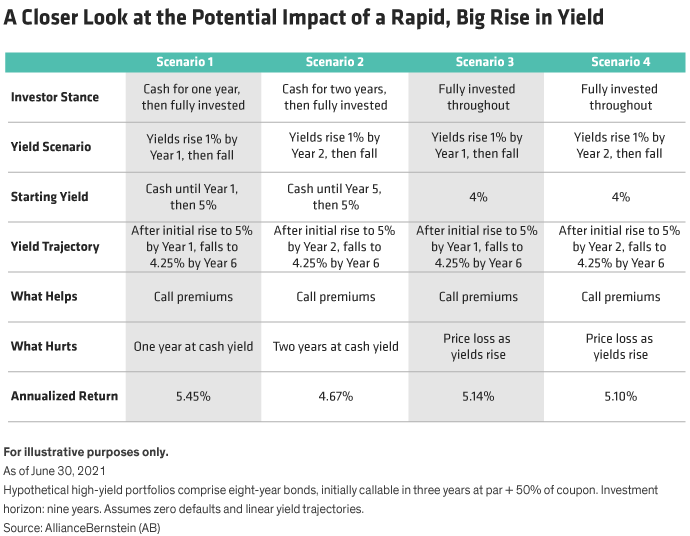 What does make a big difference is being wrong about the timing. Investors should sit on the sidelines only if they are 100% certain the “big one” will happen in the next year. If they’re wrong, and it takes more time, as in Scenario 2, they lose out.

More than most other asset classes, high yield pays well while time ticks by. That’s why, to our minds, the question isn’t whether yields will rise, but whether they will rise a lot, and quickly. And because no one can predict that with certainty, investors might as well get paid to participate.

In our scenario testing, staying invested in high-yield bonds in a falling, neutral or rising yield environment was shown to generate higher returns than sitting on the sidelines in cash.

Investors who stay invested through a rising yield scenario can reinvest principal and coupon income in newer—and higher-yielding—bonds, which may offset earlier short-term losses.

No one can predict with certainty when yields will rise or fall which means investors might as well get paid to participate in high-yield bonds.