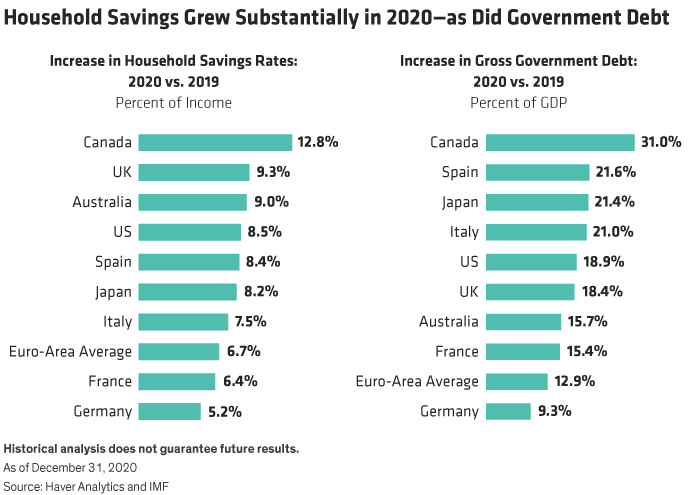 Developed-market (DM) household savings recorded a significant gain last year, with an increase equivalent to 10% of combined gross domestic product (GDP). This build-up is likely to bolster consumption as restrictions on economic and social activity are removed and pent-up demand unlocked. But the accompanying deterioration in public sector balance sheets and uneven distribution of surplus savings mean the impact is unlikely to be anywhere near as big as the headline numbers suggest.

The global economy is about to enter a period in which annual growth rates will reach undreamt-of highs. However, much of this growth will be artificial—simply reflecting that more of the economy is open today than was the case a year ago. A genuine upside surprise requires more than positive base effects. One area that might provide such a surprise is the unlocking of forced household savings. Savings rates increased across the developed world last year, as governments successfully propped up aggregate income at a time when consumption was constrained by lockdowns (Display above, left).

We estimate that the DM gross household savings rate rose from 11% in 2019 to 19% last year. Similarly, the household sector’s holdings of currency and bank deposits rose from US$1.4 trillion at the end of 2019 to US$4.3 trillion at the end of last year. This increase represents around 10% of combined DM GDP, a significant gain. Were all of it to be spent over the next two or three years, it would provide a substantial boost to economic growth.

But it’s not quite that simple. There are two important caveats:

1) It’s misleading to look at the improvement in household balance sheets in isolation. In a mirror image of the household savings jump last year, governments’ financial position, or budget deficit, deteriorated. Likewise, last year’s increase in household holdings of currency and deposits is mirrored on the liability side of national balance sheets by massive increases in government debt (Display above, right). As things stand, the risk of premature fiscal tightening looks remote. But there’s every likelihood that governments will eventually seek to claw some of this forced savings money back, especially as the chief beneficiaries have been better-off households. Even if there are no immediate tax increases, fear of future hikes is likely to dampen people’s enthusiasm to spend their surplus savings—a late-2020 Bank of England survey showed that only 10% of those households in a position to spend surpluses (representing just 3% of the whole sample) planned to do so.

2) The increase in savings isn’t evenly distributed. A recent study by the French statistical office, INSEE, showed that the average household in France was almost €4,000 better off last year. But the increase was just €218 for households in the bottom wealth quartile and over €10,000 for those in the first quartile. As the marginal propensity to consume is likely to be much lower for the upper-income group, focusing on the average or aggregate gain is likely to overestimate the potential boost to consumption, perhaps grossly so.

But the impact of these enlarged savings might not be a big as headlines suggest.

Fear of future tax hikes will also dampen the impact of household spending on stimulating the economy.