US Housing Outlook: Rates and Supply in Tug of War

With interest rates on the rise, the once red-hot US housing market is finally showing signs of cooling. But while rising mortgage rates have put a damper on demand, they’ve also contributed to an already tight supply of single-family homes. Until home building accelerates, supply constraints should continue to provide some price support, even as demand moderates.

The US housing market is emerging from a period of price inflation not seen since the run-up to the global financial crisis. In 2021 alone, US housing prices jumped nearly 20% on a year-over-year basis, driven by low mortgage rates, surging demand—particularly by millennials—and work-from-home flexibility brought about by the COVID-19 pandemic.

But perhaps the single biggest driver of housing inflation has been a lack of supply. In recent years, the US has seen some of the lowest home inventory levels on record. This has led to frenzied bidding wars, with properties in hot markets routinely selling above asking prices.

Home Affordability Has Taken a Hit

With the Federal Reserve on a quest to snuff out inflation, however, the era of ultralow mortgage rates is over, with the national average for a 30-year fixed-rate mortgage north of 6%. That’s more than double the level registered in January 2021, and the Federal Reserve is telegraphing more rate hikes to come.

New homebuyers are bearing the brunt of tighter monetary policy. Coinciding with rising rates and higher prices, home affordability has quickly breached its historical average. Since the mid-1990s, just under 18% percent of median US family income has gone toward mortgage payments, on average, with much of that figure driven by housing inflation prior to the global financial crisis (Display). Now, new homebuyers are allocating close to a quarter of median US family income on mortgage payments—a dramatic increase over just the past nine months. 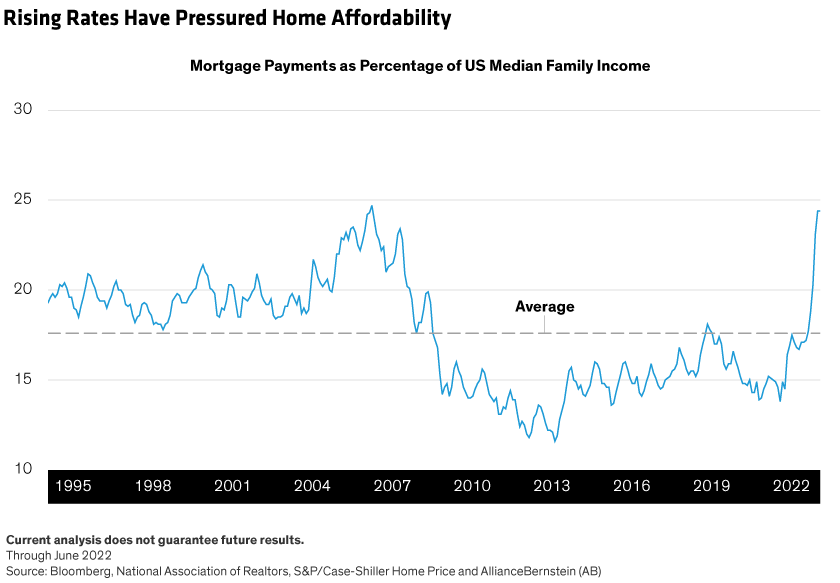 Deteriorating home affordability has, in turn, put a damper on demand, although the numbers vary widely by region and price point. Nationwide, existing home sales slipped for six consecutive months beginning in February, while additional cracks in the demand picture can be seen in the 7.7% of sellers who lowered their offering prices—a marked departure from the bidding wars seen last year.

But while the supply of new homes is beginning to climb, the inventory of available homes, which make up most of the US housing stock, is hovering at historical lows. This has supported the housing market by keeping prices elevated. As of June, more than one-third of all listed US homes sold within two weeks, with a median of 23 days on the market (Display). That is more reflective of a hot housing market than one in decline. 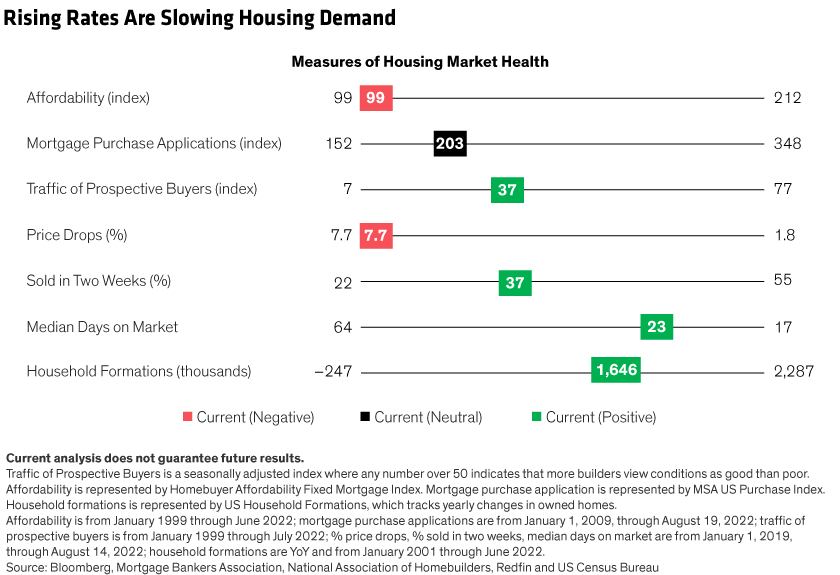 In our view, higher rates could be exacerbating the nationwide home inventory shortage. This is because rising mortgage rates generally discourage homeowners from listing properties that were financed at lower-than-market rates.

The numbers are telling: in the US, 99.5% of mortgage holders have locked in rates more attractive than what they could find if they sold their homes and borrowed at prevailing rates (Display). 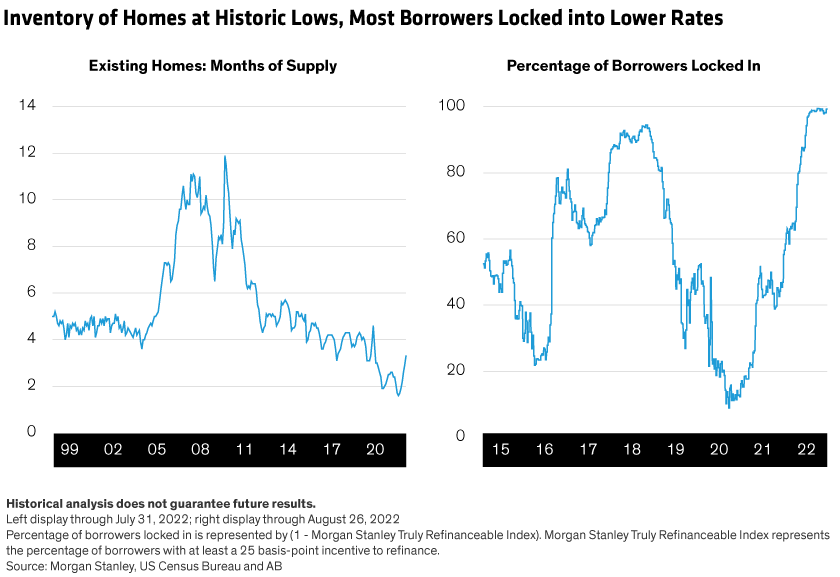 With the dynamics of the housing market shifting, it’s tempting to harken back to the global financial crisis, when subprime mortgages and skyrocketing defaults finally burst the housing inflation bubble. Could a similar meltdown happen this time around? Not likely, in our view. That’s largely a reflection of improved credit conditions and the lessons learned from the global financial crisis.

For one, stricter lending standards have prevented lower-income and credit-challenged borrowers from buying homes that are too expensive relative to their income. Low lending standards contributed to the housing crash of 2008–2009. Currently, fixed-rate 30-year loans comprise the lion’s share of US mortgages—exposing fewer existing borrowers to rising rates—while lenders have increased adjustable-rate mortgage standards.

In addition, today’s higher prices have significantly increased homeowners’ equity, which provides a powerful incentive for homeowners to stay current on their mortgages. And, despite stubborn inflation, wages have continued to rise, while real US income is still positive, further supporting borrowers’ ability to make monthly mortgage payments.

The result is historically low mortgage delinquency rates—a far cry from the years following the global financial crisis, when delinquencies spiked and cottage industries sprung up around processing mortgage defaults.

Pockets of Weakness Could Persist

That’s not to say that we won’t see pockets of weakness. If home affordability remains challenged, we expect the months supply of existing single-family homes to rise from today’s roughly 2.5 months to as high as five months by the end of 2023. Although this could take the steam out of national home price appreciation, we expect little in the way of year-over-year price declines.

As always, demand—as well as the resulting price impact—is likely to vary meaningfully across regions and price tiers, but we expect the US housing market in aggregate to be caught in an ongoing tug of war between rising rates and limited supply.

While rising mortgage rates have put a damper on demand, they’ve also contributed to an already tight supply of single-family homes.

This is because rising mortgage rates generally discourage homeowners from listing properties that were financed at lower-than-market rates.

Until home building accelerates, supply constraints should continue to provide some price support, even as demand moderates.