A Case for Investing Globally, Now

Investors often favor familiar assets. After all, “invest in what you know” represents a common refrain. And in certain cases, there are valid reasons for sticking close to home—such as when all future expenses will be incurred in your local currency. But those who reside in emerging or frontier markets, while avoiding investments in developed markets, must brace for a trade-off: a lower return per unit of risk, especially in the aftermath of a recession.

In the decade since the Great Recession, many broad emerging and frontier stock market indices have returned less while displaying higher levels of volatility compared to their developed market peers (Display). And as large tech company stocks lead the rally off March lows, some wonder whether the next cycle will look very similar to the last one. 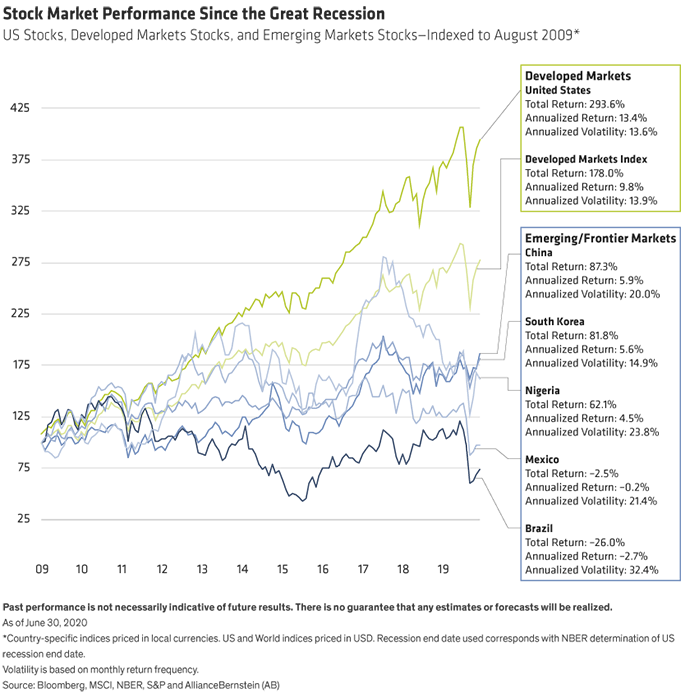 Investors in emerging and frontier markets who stay local take on heightened levels of risk because their portfolios exhibit a higher degree of geographic concentration, as suggested by the higher levels of volatility displayed since 2009 (Display). As a result, they are typically exposed to more idiosyncratic risk, without earning a commensurate premium in return. In other words, investors are more vulnerable to country-specific events that would otherwise be diversified away in a global portfolio. In contrast, developed markets tend to be more globally integrated and less susceptible to idiosyncratic risk.

Consider that since the Great Recession, developed markets endured less severe and shorter lasting drawdowns when compared to emerging or frontier markets. For instance, the maximum decline for developed market indices was just over -30%. But emerging and frontier markets like China, Nigeria, and Brazil fared worse, with pullbacks of -42%, -57% and -73%, respectively.

High-net-worth families with members spread across the globe tend to face a unique challenge with currency exposure, as they regularly spend in multiple countries. Over the last decade, spending in US dollars has been especially painful for emerging and frontier market investors, as many non-developed market currencies have depreciated relative to the US dollar. Depreciation can erode spending potential over long time periods by delivering a much lower risk-adjusted return than expected.

To illustrate the impact of exchange-rate deterioration, assume that in 2010, a Brazilian investor was planning for her eight-year-old son’s US college expenses due in 10 years. Tempted by the much higher Brazilian yield, she chose a 10-year zero-coupon Brazilian government bond, and over the period, each R$ invested grew to R$3.34. Hypothetically, that R$3.34 could be converted to $1.85 after 10 years, assuming the US dollar/Brazilian real (BRL) exchange rate remained unchanged. However, when you factor in the actual BRL depreciation over this time frame, the R$3.34 amounts to just $0.61 (Display). 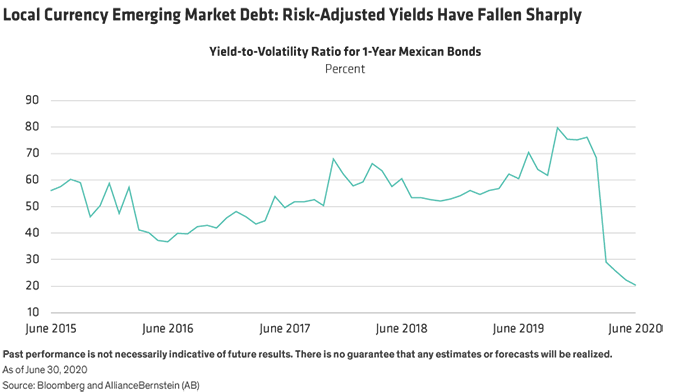 To make matters worse, bonds issued by emerging and frontier market countries denominated in US dollars still contain some element of currency exposure that can produce credit stress. That’s because emerging and frontier market governments primarily generate revenues in their local currencies. Yet the bond principal and interest payments—and associated liabilities—are in USD. That mismatch represents a risk.

Lessons from the Last Decade

We expect currency volatility to continue through the early part of the current expansion, and emerging and frontier market investors to be compensated with historically low-risk premiums as yields remain suppressed. But investors can learn from the past. Given the outlook, those in highly volatile, lower-yielding markets would be wise to create a plan to globalize their portfolios to capture the potential upside of a global economy exiting a deep recession.

We expect currency volatility to continue, and emerging and frontier market investors to be compensated with historically low-risk premiums as yields remain suppressed

Those in highly volatile, lower-yielding markets would be wise to globalize their portfolios to capture the potential upside of a global economy exiting a deep recession