Coronavirus and the US Economy: How Big Will the Hit Be?

Last week’s incoming labor-market data indicates a sizable blow to the US economy from coronavirus-related shutdowns and restrictions. We had been working with the idea of a 7.5% first-half 2020 gross domestic product (GDP) contraction, but based on new data that seems optimistic.

We now expect the shock to be at least 10%–12%. Incoming labor and government-spending data will help us refine the estimate, but a shock of that size would push down our 2020 GDP forecast. Of course, we expect that forecast to change repeatedly during the course of the year as information about the shape of an eventual recovery begins to trickle in.

Beginning to Fill In the Economic Picture

There are three big questions about the economic outlook for this year: How deep will the recession be? When will the recovery start? What will it look like? The recovery aspect is still a riddle, since it depends on the path of the coronavirus (officially COVID-19) and the public health responses. But at least we’re starting to get some information that will help us understand how much economic activity has been lost.

The best high-frequency data point we have right now is initial unemployment claims. We can use it as a rough proxy for the number of job losses. Over the past four weeks, more than 22 million workers have filed claims—and given delays and backlogs, the actual number of lost jobs is almost certainly higher. With more layoffs coming, 25 to 30 million seems like a reasonable ballpark estimate.

Unemployment Rate Could Climb as High as 20%

To put that number in percentage terms, there were slightly fewer than 152 million people employed in the US at the end of February. A net loss of 25 to 30 million jobs would translate into losses of 15% to 20% of the total work force in just six weeks. Calling that level unprecedented doesn’t quite do it justice (Display); by comparison, the global financial crisis (GFC) experience looks like a rounding error. 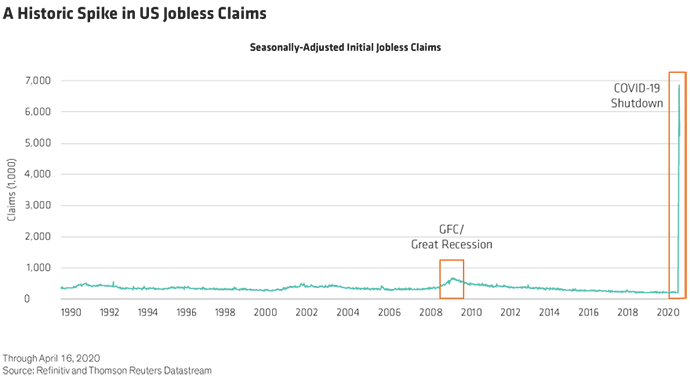 An Initial Rough Estimate of US GDP

Using the unemployment rate, we can get to a rough GDP estimate. At the peak of the GFC, the unemployment rate jumped by four percentage points year over year, coinciding with a 4% year-over-year GDP decline. The current crisis isn’t directly comparable to the GFC—given the sudden halt in activity and a much faster unemployment spike—but we can use it as a starting point to estimate GDP.

Let’s say unemployment is 15% at the end of the second quarter—an 11.3% rise from 12 months prior. If the 2008/2009 relationship holds, this would translate to a year-over-year GDP contraction of about 11%, or a 13% decline from the peak at the end of last year. If true unemployment is more like 20%, we’d be looking at an 18% peak-to-trough GDP decline.

Based on that analysis, and given our initial guess of a 7.5% GDP contraction, it seems safe to say that economic risks are clearly skewed to the downside at this point—and that the total contraction in GDP will be higher than 7.5%.

Bear in mind the uncertainties around this GDP estimate. For one thing, we don’t know how long the unemployment spike will last. We’re barely into the second quarter, and it’s very possible some workers will be back in action before June ends. Also, the unemployment/GDP relationship isn’t precise, especially given the unprecedented nature of this shock.

On a positive note, the rapid fiscal policy response suggests that government spending will fill in some of the missing GDP. If households can access greater—and even enhanced—unemployment benefits, it should blunt the impact to some extent.

Still, we expect to release a larger estimate for the near-term shock with our revised GDP forecasts at the end of the month. Something on the order of 10% to 12% seems sensible today, though incoming data on labor and government spending between now and then will enable us to refine the number.

We expect an eventual recovery once the public health situation eases, but we don’t yet have the information we need to make any new assumptions about how it will play out. As a result, it’s too early to update that part of the GDP forecast just yet.

The combination of a sharper slowdown and insufficient data to update the recovery will pull our US GDP forecast down to roughly –5% for the full year. We are, of course, hopeful that a robust recovery will start in the next few months and that the next adjustment to our forecast will be upward. But based on the information available today, it’s too early to have confidence that will be the case.