Today’s bond yields are extremely low, and some multi-asset investors may be struggling to rationalize exposure to interest-rate driven assets such as government bonds. But past experience suggests that they can still be effective diversifiers over the near term, even at low yield levels.

As the world battles the COVID-19 pandemic, government bond yields have tumbled. US 10-year Treasury yields fell below 1% for the first time in history in early March, settling in the 60–70 basis-point range. 10-year UK gilt yields have hovered around historical lows of about 20 basis points. Meanwhile, 10-year yields in Japan and Germany have stayed at zero/negative levels, where they’ve been for a few years now.

Given the bleak yield landscape—and the Federal Reserve’s repeated rejections of resorting to negative interest rates—it’s no shock that some investors are questioning the idea of maintaining interest-rate exposure as a diversifier in multi-asset portfolios. After all, how much more can government bonds really have left? And can they still be relied on to diversify against risk assets?

The Low-Interest-Rate Experience: Japan and Germany

While it’s true that government bond returns aren’t likely to be impressive at their current yield levels, our research suggests they may still be effective diversifiers when used tactically.

US Treasury yields don’t have much experience in ultra-low-yield environments: the 10-year Treasury yield has never been negative, and we think negative rates are unlikely. German bunds and Japanese government bonds (JGBs), however, have seen extremely low or sub-zero rates for a few years now.

Since 2010, 10-year JGB yields have been below 1% on more than 2,200 different days. That total includes 475 days with sub-zero yields. German Bund yields dropped below 1% in the second half of 2014, and they’ve remained in negative territory since March 2019.

Across this entire data set—over 5,000 days of very low interest rates—Japanese and German government bond prices mostly moved in the opposite direction from stock prices. So, directionally, they did what they were expected to do—they provided diversification, as illustrated by negative correlations (Display). 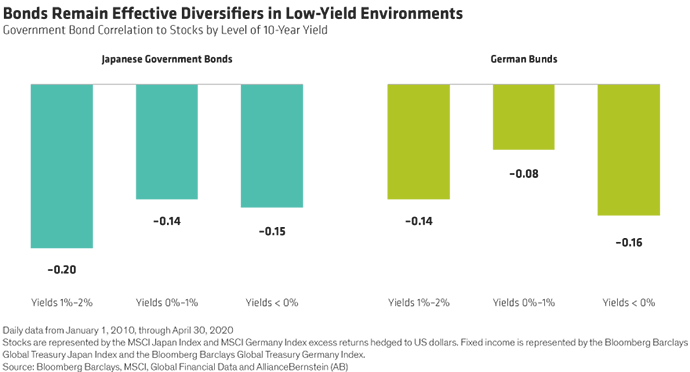 Yes, Bond Yields Are Low—but Don’t Forget About the Slope

How can duration remain an effective diversifier against risk-asset exposure, even when bond yields are ultra-low or even negative? As it turns out, the level of yield on government bonds isn’t an effective predictor of short-term future returns. But the slope of the yield curve is.

The key is carry, the currency-hedged excess return versus cash from longer-term bonds over time—all else remaining equal. The value of carry is defined by the difference between longer-maturity yields and shorter-term cash rates—the slope of the yield curve.

As measured by the difference between 10-year yields and three-month rates, the slope of major developed-market government bonds was about 40 basis points in mid-May (Display). That’s below average, but still meaningful. The US Treasury yield-curve slope was about 60 basis points.

With positive yield-curve slopes, government bonds still have the potential to deliver modest returns and provide diversification against risk assets in multi-asset portfolios. So, in our view, carrying duration exposure on a tactical basis still makes a lot of sense.

From an intuitive standpoint, government bonds have been effective diversifiers for equities in environments where investors’ primary concern is centered around the economic growth outlook. Duration has not been effective in that role when investors fear inflation risk, but inflation risk isn’t prominent right now.

Based on our current assessment, multi-asset portfolios that are tactically neutral or overweight to equities should consider a modest overweight to duration as a counterbalance. We think the environment—poor growth, low inflation and falling yields—supports it, and central banks seem committed to keeping rates down. We also feel that attractive yield spreads in fixed-income credit merit an overweight and can enhance returns.

Multi-asset investing requires a broad tool kit, including beta diversifiers like duration, though diversification isn’t the only way to defend against drawdowns. Other techniques, such as tactical shifts and options can also be effective (in combination or alone) in different conditions.

While no tool is effective in every environment, the Japanese and German experiences in very low interest-rate scenarios provide evidence that low yield levels alone aren’t necessarily a reason for multi-asset investors to ignore government bonds.

But our research suggests it may still work tactically