How Long Can Big Tech Dominate the Market?

When it comes to Big US Tech companies, conflicting sentiments abound. Some investors look at the strong returns over the past several years and wonder why you’d own anything else. But others cast a more skeptical eye. They view the recent market rally as proof of a bubble that may be poised to burst.

In either case, the underlying question remains the same: “How do the prospects for Big US Tech compare to other investment opportunities and how should we balance these holdings in our portfolios?” Before we lay out the risks and rewards that we currently see, let’s make one thing clear. This is not Tech Bubble 2.0.

It’s Lonely at the Top

To be sure, there are some signs of speculative excess. But unlike the late 1990s, those excesses haven’t been driving the overall market. Instead, they’ve been relegated to the periphery. For instance, there’s been an undeniable fervor for certain stocks, a rush of capital into special purpose acquisition vehicles (“SPACs” or “blank check companies”) that solely aim to place private businesses on public exchanges, and an inexplicable move to buy shares in companies that have already filed for bankruptcy. But that’s the stuff of financial entertainment—not the core driver of the market.

That said, the narrowness of market leadership merits attention. The top five stocks in the S&P 500 (Apple, Microsoft, Google, Amazon, and Facebook) currently account for 23% of the total index value (Display). That eclipses the level seen during the height of the Tech Bubble, when it approached 20%, as well as the average over the last several decades (10%–15%). 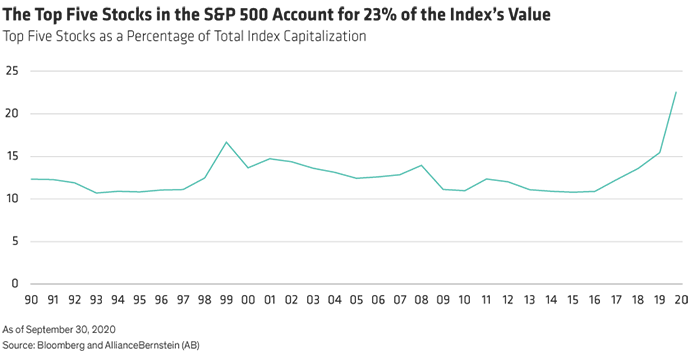 Perhaps more shocking, though, is Big Tech’s breakout performance this year relative to the rest of the market. Since January, the value of the entire S&P 500 has increased by around $1.2 trillion. Yet Apple and Microsoft alone have risen by the same amount. Remove these two stocks, and the index has been flat. Meanwhile, at the other end of the scale, you find ExxonMobil and the major banks, each of which has erased over $100 billion in value.

That carries two implications. First, it’s been a tough year for active investors. Given the concentration, if you were underweight the Big Tech names, it’s been hard to keep up with—let alone beat—the index. Second, there is an abnormally high amount of single-stock risk embedded in the index. Looking ahead, that may serve as either an opportunity or a risk, depending on your perspective.

If there’s significant exposure to the top names compared to history, what’s the outlook for that group of companies and how does it compare to the rest of the market? There’s no clear answer. Even inside our firm, views vary slightly across teams. But broadly speaking, even with this year’s moves, we see opportunity remaining in a few of them and hold selective overweight positions. At the same time, there are also cases where the stocks have run ahead of fundamentals and we’re underweight. Again, this is not Tech Bubble 2.0. Even among these leaders, we see value. It’s just not distributed evenly among them.

Is Growth Going Out of Style?

What about the rest of the market? Along with Big Tech, stocks that fall into the Growth style category have outperformed for several years—especially during the pandemic. In fact, adjusted for the level of risk, Bloomberg’s Pure Growth basket has led all other major asset classes and styles over the past year. In contrast, Bloomberg’s Pure Value basket has languished. That’s notable on several fronts.

Stocks that have true long-term growth potential should outperform in an environment like we’ve experienced this year. Since more of a Growth company’s earnings remain in the future compared to those of its Value peers, the decline in interest rates (i.e., the discount rate) has benefited them disproportionately. Accordingly, much of the move we’ve seen can be justified.

But that doesn’t eliminate the prospect that investors have gotten carried away. In fact, the divergence between Growth stocks and Value stocks globally is near its most extreme ever, across a range of measures (Display). With relative valuations at such stretched levels but relative fundamentals not as far apart, that’s worth bearing in mind. 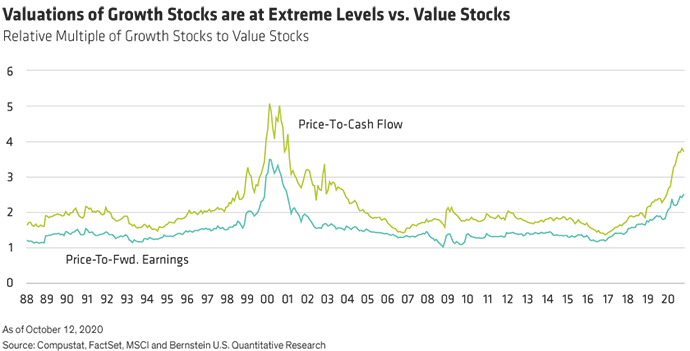 Looking ahead, Growth stocks are unlikely to benefit from further reductions in interest rates, which means the tailwind they’ve enjoyed recently may dissipate. However, they could find a different kind of support—from investors who are forced out of low-returning assets and into riskier assets (in other words, if the equity risk premium continues to fall).

The key catalyst that could spark a resurgence in Value stocks is a rise in inflation. There are some good reasons to expect that, but also some compelling counterarguments, as we discussed here. At the same time, there are still areas within Growth and Tech which have not enjoyed the same recent strength as Big Tech. These “growth at a reasonable price” stocks, both in the US and overseas, appear to be fertile ground for future investment returns. That’s the pool that many of our research analysts and portfolio managers have been fishing in recently.

Finally, as we often discuss, diversification remains essential to long-term wealth building and protection. If Big Tech continues its run, diversified investors can participate in the upside. However, if Big Tech stumbles, diversification will also protect you from suffering too large a hit. Our goal is to build a portfolio like a large ship, capable of navigating both calm waters and turbulent seas. Big Tech plays a role in that, as do other parts of the market. We’ll continue to emphasize stability and diversification while also targeting areas where we see relatively high rewards relative to the risks.

How do the prospects for Big US Tech compare to other opportunities and how should investors balance these holdings in their portfolios?

There are some signs of speculative excess, but those excesses haven’t been driving the overall market