How Trump and Biden Stack Up on the Big Issue

This blog is part of Bernstein’s series on the impact of the 2020 election for investors. Along with this blog, check out our blog last week on how elections tend to matter for markets as well as our white paper on the wealth planning steps you should be taking in the next three months. And stay tuned for our final blog in the series on how the election will affect not just the economy but also different companies and industries.

The 2020 election can primarily impact the economy and the market through two major channels—monetary policy (interest rates, as influenced by the Federal Reserve) and fiscal policy (government taxes and spending). And while most investors are fixated on who will win the White House, the balance of power in the Senate will likely prove equally critical.

Because we believe the Democrats will maintain control of the House of Representatives, the remainder of our analysis will focus on the following four configurations:

Easy Money Will Continue to Flow

Whichever way the election shakes out, monetary policy will likely remain accommodative. Given today’s extraordinary health and economic crisis, the Fed will do its utmost to help stabilize the economy, regardless of the election results. Where might a difference emerge? If President Trump wins reelection and Republicans control the Senate, he may nominate a new Fed chairperson, who could be less independent than the ones we’ve had in recent decades. Any loss of central bank independence—real or perceived—could increase inflation expectations and, in turn, actual inflation.

Fiscal policy, on the other hand, is much more likely to vary depending on the balance of power. That’s because each party has different priorities for taxing and spending. Even within the parties, key players hold disparate views when it comes to budget deficits, surpluses, and the merits of taxing and spending for various constituencies.

That said, we expect either a Status Quo or Blue Wave outcome to herald more expansionary fiscal policy than in a government in which the presidency and the Senate are split. In a Status Quo scenario, we foresee tax cuts and potentially some stimulus or infrastructure spending. A Blue Wave could also bring stimulus spending, but with a larger infrastructure plan that’s offset slightly by higher taxes on companies and high-earning individuals.

Not surprisingly, in a divided government, we’d expect more legislative conflict. If President Trump wins but faces a Democratic Senate, we’d expect pushback on his tax cuts and agreement on stimulus, but difficulties in prioritizing the spending. If a Biden presidency faces a Republican Senate, we see the greatest scope for partisan conflict impinging on the economic recovery. In this scenario, we foresee Republicans quickly rediscovering austerity and resisting Biden’s stimulus, infrastructure, and tax plans (Display). 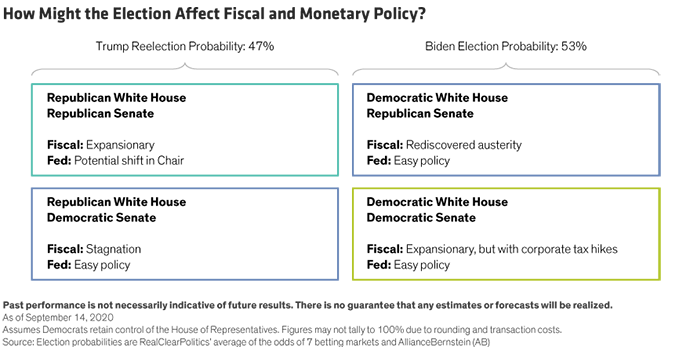 Does the Tax Man Cometh?

When analyzing the major pillars of each campaign’s platform and their potential impact, it’s important to view these as a wish list. Ultimately, the policies pursued once in office—and which versions of them survive the political realities—matter most.

Clearly, President Trump and Vice President Biden hold competing visions for the future (Display). On taxes, we expect Biden to focus on partially reversing Trump’s corporate tax cuts and raising the marginal tax rate on those in the highest tax bracket to 39.6%. We’d also expect him to tax capital gains as ordinary income on those with high incomes. And while Biden’s proposals have targets and thresholds, we still consider them aspirational and subject to political negotiations. Even if implemented, they may come in a more moderate form. 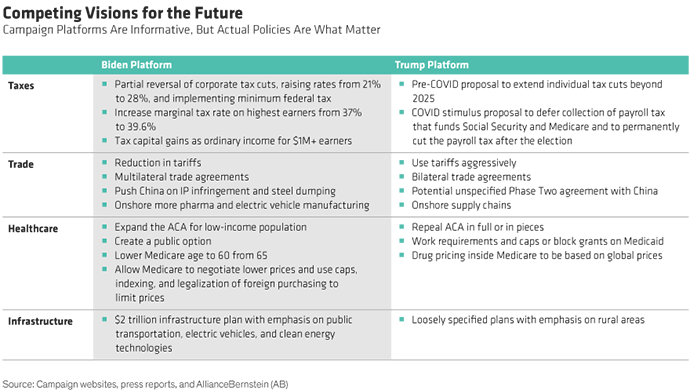 President Trump’s future tax plans remain less specific, although before the pandemic, he discussed extending the individual tax cuts from his 2017 tax plan beyond their 2025 expiration. Since the onset of the pandemic, President Trump has emphasized cutting the payroll tax that funds Social Security and Medicare—he’s signed an executive order delaying payment of the payroll tax for those making less than $4,000 every two weeks and stated that he’d forgive those taxes due if reelected as well as make permanent cuts to the payroll tax.

While taxes capture headlines, their counterpart—spending—is just as important. In a Biden administration, tax increases would likely accompany a generational infrastructure plan, rather than emerge as standalone legislation. Spending would be targeted at expanding and improving roads, railways, and transportation networks as well as transforming the nation’s infrastructure toward clean energy.

As AllianceBernstein’s Chief Economist Eric Winograd has highlighted, economists tend to favor infrastructure spending because it generates economic activity now while leading to productivity improvements, faster growth, and higher standards of living in the future. President Trump has also expressed significant interest in a major infrastructure plan. While not paired with any tax increases, his proposal appears to focus on rural transportation networks and Internet connectivity.

The candidates also diverge in their approach to trade. Both administrations will likely maintain pressure on China when it comes to intellectual property rights and controversial trade tactics. However, the degree to which each would employ tariffs to accomplish their aims differs.

President Trump—a self-declared “Tariff Man”—has liberally applied penalties on China and the US’s other trading partners. We would expect more of the same in a second term. In contrast, Joe Biden would more likely pursue multilateral trade agreements, such as the Trans-Pacific Partnership, and use these kinds of alliances to lean on China.

Healthcare represents another critical policy front in the coming years. President Trump and the Republican party have prioritized dismantling the Affordable Care Act (ACA) for close to a decade. In a second Trump term, we assume that effort would continue. We’d also expect to see a continued push to implement work requirements and/or block grants in Medicaid.

Unfortunately, with no clear proposals to replace Obamacare, it’s tough to assess what the healthcare system would look like if Republican efforts to scale back or eliminate the ACA succeed. In contrast, we’d expect an expansion of the ACA for low-income workers and attempts to lower the Medicare age to 60 (from 65) under a Biden administration. Unlike some of his competitors in the primary, Vice President Biden did not favor Medicare for All, but he has supported including a public option for healthcare.

We also expect differences between the candidates in drug pricing policies. Based on the proposals we’ve seen from the White House, the Republican Senate, and the Democratic House, we anticipate that President Trump would seek to curb drug pricing in the Medicare program and to tie those prices to a global index. From Biden, we’d expect similar policies inside of Medicare coupled with efforts to tackle drug prices in the private insurance market—including efforts to legalize prescription drug purchases from foreign countries.

While the Trump and Biden campaign platforms differ significantly, it’s important to remember that their eventual policies will also depend on who controls the Senate and the political realities inside each party. Those policies will primarily impact the economy, and in turn the markets, through government policies on taxing and spending. Broadly speaking, either a Status Quo or Blue Wave outcome will likely offer the economy the most stimulus to break out of the current recession. As different as the candidates’ policies appear, we see the widest divergence in their impacts when we look at the industry or company level, which we’ll discuss in our next blog.

Who wins the White House in 2020 will have critical implications, but just as important is which party will control the Senate

Either way, government policies on taxing and spending will have the biggest impact on the economy and markets