How Will the Election Affect the Market?

Over the next week, we’ll be releasing a series on the impact of the 2020 election for investors. Along with this blog, check out our white paper on the wealth planning steps you should be taking in the next three months. And stay tuned for our upcoming blogs on how the election will affect the economy and different companies and industries.

“What will happen to financial markets after the election? More so than usual, we have a decent idea.”

As predicted, when the race was called for President Trump on election night, S&P 500 futures fell 5% in late night trading. And yet by the end of the next day, the stock market had gained that back and more. A year later, US stocks had returned over 23%. Such are the perils of making stock market calls based on elections.

As another presidential election approaches, many investors wonder what the election might mean for their portfolios. We’ll lay out our recommendations in a series of forthcoming blogs—but suffice it to say that asset allocation based on a plan beats asset allocation based on politics. For those with a plan in place, stick with it. For those with new funds to invest, develop a plan, then stick to that.

That doesn’t mean we’re ignoring the election. In fact, our analysts and portfolio managers are actively following the race. They’re assessing the policy implications, weighing alternate political scenarios against forces like the coronavirus and market valuations, and using those views to take advantage of mispriced securities and to construct durable portfolios.

When Do Elections Matter?

As much attention as elections receive—and as much power as the president of the United States has—the market has historically been indifferent to who occupies the Oval Office.

Under Democratic presidents, the market has returned an average of 9.2% each year. And under Republican presidents? Roughly equal, at 9.1%. The degree of partisan control has made slightly more impact, with the market delivering 10.0% on average when the White House and Congress have been split, compared to 8.2% under unified control (Display). 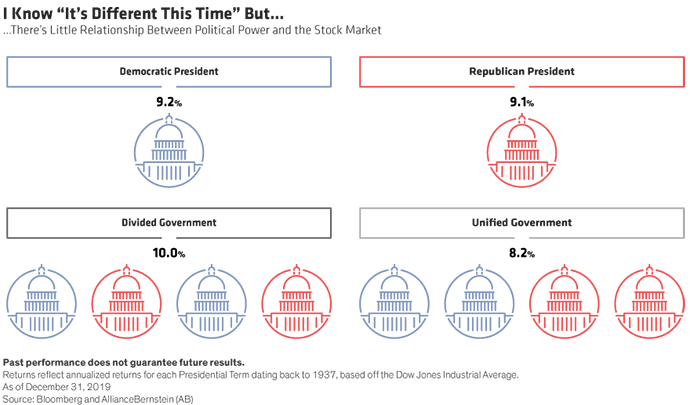 When the Rubber Meets the Road

Beyond the lessons from history—and despite widespread election coverage—some aspects remain difficult to handicap. For instance, we know what the latest polls show, and which government policies could potentially impact the economy and the markets. But we don’t know how closely the election results will match the polls or how closely enacted legislation will correspond to candidates’ platforms. Platforms are marketing. Governing is prioritizing.

Determining the extent to which the market has priced in different election results or policies may be the most complicated task of all. It’s enough of a challenge at a company or industry level; it’s almost impossible for asset classes overall. Inside of US stocks, for instance, one sector may be pricing an outcome as highly probable while another sector is pricing the exact opposite.

Will This Time Be Different?

While we don’t currently recommend any tactical asset allocation changes based on the election, that doesn’t mean it won’t matter to the markets or be factored into our clients’ portfolios. What happens when the market does turn its attention to politics?

Over the past six election cycles, the market focused on other issues from January through September. But as the election approached, and especially in the month before the election, the correlation between stocks and the candidates’ polling spread increased substantially (Display). For all its efficiency, the market frequently remains shortsighted, only beginning to price in the election outcome as it draws near. And even then, its efficiency can be questionable, as evidenced by its reversal on Trump in 2016 and its slow incorporation of the 2017 tax cuts, which continued well into 2018.

Yet based on one key metric, today’s market is already factoring in the election to an extent. Whether due to anticipated delays in counting ballots or the considerable degree of political polarization, options markets are pricing in significantly higher volatility this November compared to what we’ve experienced recently during the pandemic and what we saw across 2012 and 2016.

So how should you think about the outcome? We recommend that long-term investors look past the horse race narrative and instead focus on the things that matter most over a multiyear horizon—their strategic asset allocation and the fundamentals of the economy. Most likely, the election will impact tax rates and by extension, wealth planning and tax management; for most of our clients, that conversation should take center stage over the coming months. At the same time, we’ll continue to adjust our portfolios on an ongoing basis to incorporate the most likely election impacts—from what they could spell for the economy and different asset classes to what they could mean for individual stocks and sectors.

Will this time be different?