Municipal Bonds: The State of the States

As COVID-19 continues to slow the economy, the media has been rife with headlines foretelling revenue shortfalls and a cash crisis for battered state budgets. We look under the hood to better assess the status of the headline-grabbing states with the largest debt burdens.

Many States Had Prepared for the Unforeseen

Bond investors are right to be concerned. COVID-19 hasn’t been kind to anyone or anything, and municipal finances are no exception. When the pandemic struck, many investors expected state budget shortfalls to be as big as those of the 2008 global financial crisis and the recession that followed.

But municipal default rates have remained low through many crises, including the crisis of 2008. No state has defaulted since the Great Depression, and with today’s ample liquidity and market access, no state is even close to being in danger of a missed payment. While the strain of the pandemic may result in rating downgrades, we expect the overall credit quality of states to fare well through the coronavirus crisis.

Why has state credit quality remained so strong? To start, states came into 2020 on much stronger footing than in 2008. Municipal and state governments had used the long economic expansion since the global financial crisis to shore up their balance sheets and reserve funds. In fact, states faced the pandemic with more cash on hand than they have had in decades—on average, almost 8% of budget. And municipal debt to GDP is well below levels of 15 years ago.

Additionally, the federal government responded to the crisis by passing the initial CARES Act, which included direct disaster-related aid to municipalities of $150 billion—plus another $275 billion earmarked specifically for healthcare, education, transportation and airports.

Revenues Ahead of Expectations

Most fiscal year 2021 state budgets were proposed early in 2020, before the potential impact of the coronavirus shutdowns was fully understood. These budgets quickly became obsolete as COVID-19 costs soared and projected revenue shortfalls swelled.

However, not all feared revenue shortfalls have come to fruition. In Illinois, for example, revenues are down but running almost 10% ahead of budget. Massachusetts’ revenue received is 3% ahead of last fiscal year ($124 million), even though state officials had estimated that tax collections could fall by $2 billion to $8 billion this fiscal year. Even hard-hit New York State’s revenue is 2.9% ahead of budget for the first half of its fiscal year.

Future revenues may also hold up better than expected for states with a progressive income tax. Higher wage earners can work remotely and retain their jobs through the crisis. And thanks to a volatile but hardy stock market and strong residential real estate prices, capital gains tax revenues should remain steady. Sales tax receipts have also held up better than expected as people trapped at home have indulged in online retail therapy and home improvement projects. On the other hand, revenues from gas taxes, hotels, airports and even toll roads have plunged, as people have simply stayed home.

When states face revenue shortfalls, they have four levers to pull. They can use fund balances and reserves, borrow, raise revenues or cut spending. Many states have used portions of their rainy-day funds. To date, only a few have borrowed. Raising taxes and cutting spending during recessions is politically difficult and can worsen the economic stress. Many states have, however, started slashing payrolls (Display, below). 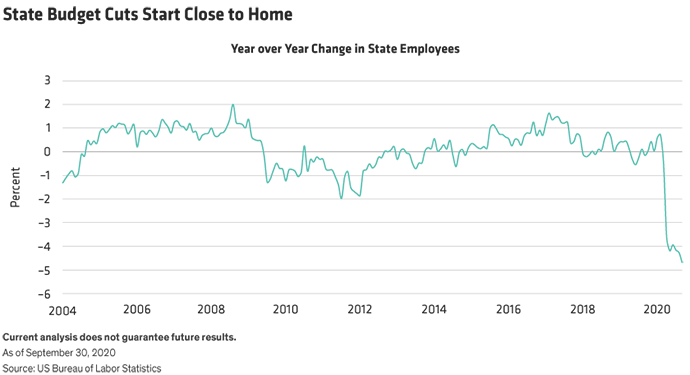 All five states have taken advantage of the four budget-balancing levers to varying degrees. All but Illinois had rainy-day reserves, which are being used to partially offset deficits while leaving some reserves remaining. Connecticut, Massachusetts and New York have made or plan to make spending cuts. Connecticut, Massachusetts and New Jersey are raising revenues, though some of the actions are fairly small. Three states—Illinois, New Jersey and New York—plan to borrow if necessary to partially close their budget gap. And for all five states, tax revenues are coming in higher than initially expected.

Another resource available to states is the Federal Reserve’s Municipal Liquidity Facility (MLF), which was created to provide liquidity to state and local governments should it not be available in public markets. The MLF allows states and some municipalities to sell short-term notes directly to the Federal Reserve, though it is scheduled to expire at the end of 2020.

However, the market has been liquid, at least partially because the MLF exists as a safety net. As a result, market rates have remained below MLF pricing, so only two issuers—Illinois and the New York Metropolitan Transportation Authority—have tapped it, and total usage of the facility is only 0.33% of capacity. The limited use of the MLF suggests that states and large municipalities have other means to manage their liquidity.

New York State is an example of how a seemingly dire situation can be managed effectively. New York State’s fiscal year started only a few weeks into the coronavirus shutdowns, on April 1, 2020. As one of the early epicenters of the pandemic, the state has suffered greatly on both a humanitarian and financial basis. The resulting state budget shortfall was estimated at 15%, or $14.5 billion.

Covering such a large shortfall on short notice wasn’t easy. In New York’s case, some help came from federal funds, specifically $1.2 billion in school aid, $2.2 billion in temporary Medicaid, and $1.0 billion from the CARES act. Freezing pay and hiring at state agencies netted the budget another $2.0 billion, while $1.0 billion of assistance came from last year’s budget surplus. The final piece, more than $8 billion, came from cutting aid to municipalities.

New York projected revenues conservatively, and to date its budget has outperformed the original dire predictions. Revenues are $1.5 billion higher than expected and expenditures are lower by $3 billion. Should the state’s situation worsen, it still has $6.7 billion in reserves and $4.1 billion in cash-funded capital projects that could either be delayed or financed, and it can borrow $21.9 billion from the MLF.

Investors should remain vigilant as the crisis continues, carefully watching the inner workings of states’ economic engines for changes to credit quality and liquidity—particularly with lowered odds for further federal stimulus in 2020. Investors should brace themselves for negative headlines as states work to cover current-year shortfalls and plan for next year. Some ratings downgrades are also likely as lower initial fund balances and a slower economy will make future fiscal year budgets challenging.

However, even when looking under the hood at the options of some of the most indebted states, we believe the fundamental credit quality of states remains strong.

Terrance Hults and Matthew Norton are Co-Heads of Municipal Portfolio Management, and John Ceffalio is a Municipal Credit Research Analyst at AllianceBernstein (AB).

COVID-19 hasn’t been kind to anyone or anything, and municipal finances are no exception.

But many states had prepared for the unforeseen and revenues are ahead of expectations
And even when looking at some of the most indebted states, we believe fundamental credit quality remains strong