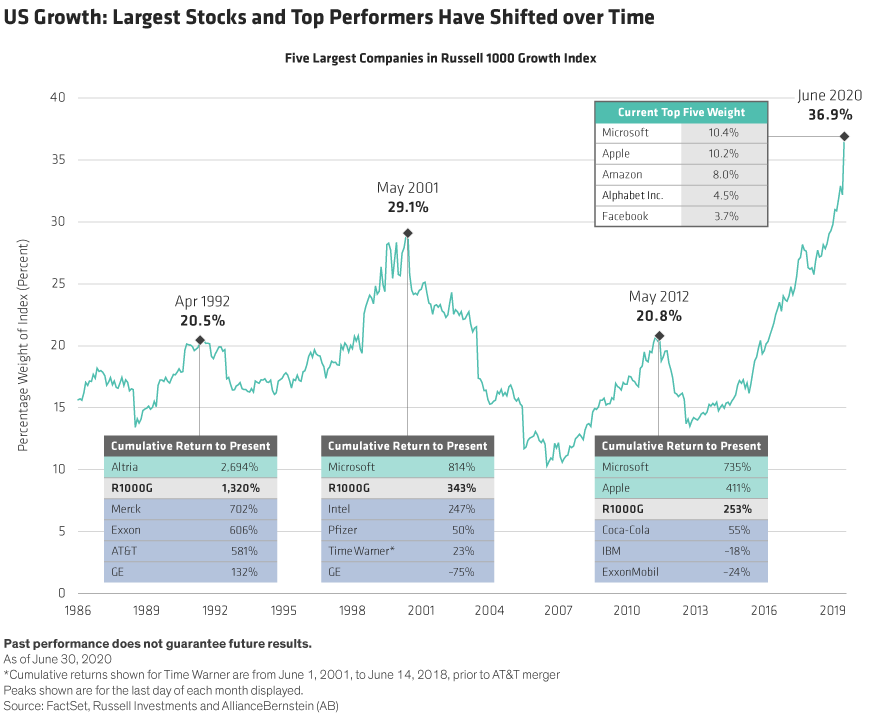 US growth companies led the second-quarter rebound, fueled by the five largest technology and new media stocks, which now comprise more than a third of the Russell 1000 Growth Index (R1000G). Investors should be alert to the risks of high benchmark concentration.

By the end of June, Microsoft, Apple, Amazon, Alphabet Inc. (Google) and Facebook made up nearly 37% of the R1000G. That’s the highest absolute concentration this index has ever seen.

Turnover at the top has been frequent. Yesterday’s giants didn’t remain at the top forever. In the past, the largest growth companies included leaders in energy, healthcare, industrials and consumer staples. Some dropped far down in the growth rankings, while others fell off the growth index entirely.

Many of these companies experienced performance challenges that undermined their dominant positions. Since the three previous periods when index concentration peaked, in only four instances has a top-five company gone on to outperform the R1000G.

Will Regulatory Risk Prompt a Change in Sentiment?

Today, technology, communications and e-commerce companies dominate the top slots, making for very narrow leadership. Their dominance has also led to a record concentration of US stocks in the MSCI World Index at nearly 66%—more than double 30 years ago. But as investors well know, past performance doesn’t guarantee future results.

That doesn’t mean these companies are bad investments as individual holdings. Each enjoys powerful business drivers as well as strong growth potential. But we think it’s imprudent to assume that all five will continue to lead the market indefinitely, especially with growing regulatory pressure threatening their dominant positions. US and European antitrust investigations are under way, while new acquisitions are facing increased scrutiny and ad-spending boycotts are spreading. And given the high correlation of returns for these stocks, investors seeking to capture growth through a passive portfolio that claims to offer diversification will actually have more than one-third of their risk concentrated in five names.

When a company’s growth drivers are compromised, investor sentiment can reverse very quickly. Investors should make sure they aren’t too heavily exposed to a small group of very large stocks—via passive or active portfolios—that may be subject to unpredictable risks.

And regulatory risk could prompt a change in sentiment