The 2020 US Election: How Tax Policy May Impact Municipal Bonds

What will a Trump or Biden win mean for municipal bonds? From taxes to infrastructure, the candidates differ—sometimes dramatically—on policy, so muni investors should stay nimble. A closer look at each platform may help investors better prepare for either election outcome—and potential scenarios that might ripple across the muni pond.

If Trump wins, tax policy will likely remain in line with the Tax Cuts and Job Act (TCJA) of 2017. Personal income tax rates would hold at 37% for top earners and 21% for corporations. We don’t expect major tax changes in a second Trump administration, but the campaign is floating capital gains tax cuts and sunset extensions for personal income tax rates. As such, we don’t expect major impacts on the municipal bond market.

A Biden win would probably result in tax increases. The top personal income tax rate could increase from 37% to 39.6%, while the 3.8% Medicare surcharge on investment income for higher earners wouldn’t change. Another proposal would expand the 12.4% Social Security payroll tax—evenly split between employer and employee—to earned incomes above $400,000 (it currently applies only up to the first $137,700 of earned income). Taxing long-term capital gains at ordinary income levels for earners over $1 million is also on the table.

These tax hikes would increase demand for municipal bonds, especially among wealthier earners. Higher demand could make munis more attractive relative to taxable bonds, which in turn would increase muni prices. In the current low-yield environment, however, we believe initial price changes would be minimal (Display). 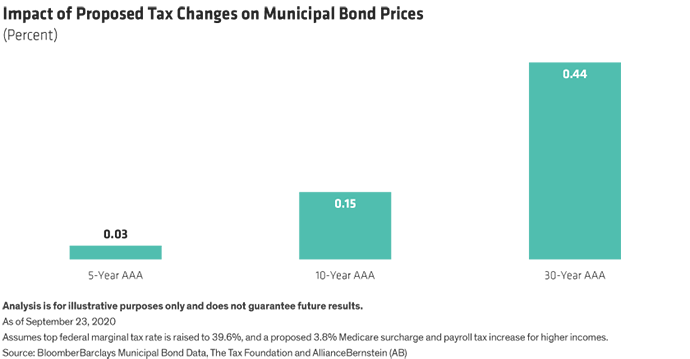 Biden would raise corporate taxes, too, likely to 28%, according to the bipartisan Committee for a Responsible Federal Budget. Higher corporate tax rates tend to drive up muni demand, especially among banks and property and casualty insurers.

The $10,000 cap on SALT deductions will probably hold if Trump wins. Many affected investors, especially in higher-tax coastal states, fled to tax-exempt in-state munis to offset the new cap, which took effect in 2018. That year, inflows to muni bond funds reached $10 billion in January alone, according to the Investment Company Institute.

If Biden wins, the cap could change again. Although he hasn’t specifically addressed SALT, a Biden administration could raise or eliminate the SALT limit, and in-state bond demand in turn could retract. Again, it’s not clear where SALT caps will end up, but Democratic leadership has been vocal about eliminating deduction limits.

The tax-exempt status of advance refunding bonds could change with a new president. When the TCJA eliminated it, a raft of new issues hit the street in late 2017 to beat the cutoff, hurting prices for a time. Advance refunding munis could regain tax exemption under Biden. He hasn’t mentioned it specifically, but a permanent reinstatement is part of the Democrats’ Moving Forward Act. If that were to happen, issuance would increase. But we think more demand spurred by higher tax rates and investors seeking relatively safe alternatives to low-yielding US Treasuries should meet the increased supply.

Infrastructure spending is the cornerstone of many state and local government muni issues, from highways and bridges to airports and power plants. With many jobs at stake, it’s consistently a hot-button election issue.

Trump’s proposed $1 trillion infrastructure program covers many areas, including money for transportation and deep rural projects. But priority shifts have so far delayed a spending deal with Congress. A Trump win could help move the needle, however, especially if Republicans keep the Senate and take the House.

The level of impact on muni bond supply from either candidate’s proposal will depend on the form of debt each issuer takes on to fund its needs. For instance, will the added supply come in the form of tax-exempt or taxable bonds (a.k.a. “Build America Bonds”)? This outcome—and how well investor demand can absorb supply—will determine the direction of municipal bond prices.

Despite some recent hiccups, municipal bond market liquidity is stable and risk/reward characteristics are attractive. Opportunities are out there for active muni investors who stay the course but keep their options open, too. For example, credit spreads are near or above their long-term averages, which makes mid-grade, such as BBB-rated, and high-yield munis especially compelling.

Will the general election’s outcome change things? We won’t predict, especially when congressional leadership is also up for grabs and even the winner may not get what he proposes. But the high uncertainty should be a signal for muni investors to remain flexible, stay informed and be ready for any possibility.

We won’t predict, especially when congressional leadership is also up for grabs and even the winner may not get what he proposes

But the high uncertainty should be a signal for muni investors to remain flexible, stay informed, and be ready for any possibility