US Economy Still Faces a Long Path Back to Normal

With the third quarter now in the books, US economic activity continues to track our expected trajectory of a quick but incomplete recovery that over time will give way to a more gradual, lengthy path back to “normal.” But many variables can still influence the outcome.

With information about both phases of that path now in hand, we’ve fine-tuned our gross domestic product (GDP) forecasts for this year and beyond (Display). We’re reducing our estimated drop in 2020 US GDP growth from –5.4% to –3.8%. That leaves the economy on course to regain roughly 70 percent of the activity it lost as a result of the pandemic crisis by year end.

But the revised forecast also implies a flatter trajectory and a modest growth downgrade for 2021—from a gain of 3.8% to 3.4%, so the overall economic activity level at the end of 2021 doesn’t change meaningfully with this forecast update. In our assessment, it will take until the fourth quarter of 2021 or first quarter of 2022 before US economic activity regains its previous peak.

As always, economic forecasts require underlying assumptions, and in this case those assumptions have little to do with economics. Instead, they have a lot to do with developments in the public health sphere, political policies and the resulting outcomes:

The US economy bounced back more robustly in the third quarter than we had anticipated, which warranted the upgraded 2020 GDP growth forecast. Personal consumption was the big driver: with fiscal support playing a key role, household spending held up better than expected.

The strength certainly isn’t uniform, though. Consumption of goods has fully rebounded, but consumption of services remains deeply distressed. Housing activity is robust, but industrial production has lagged. Still, in aggregate, the third quarter was encouraging.

The downgrade to the 2021 GDP forecast largely relates to questions about additional fiscal support—still a critical need despite the strong third quarter.

More than 10 million people employed prior to COVID-19 remain out of work today. Economic activity may be roughly two-thirds of the way back, but the labor market is only halfway back. That’s a particular concern given the rising share of job losses now deemed permanent. So far, households have gotten by thanks to fiscal support programs, which have shored up income for those who lost their jobs.

But those programs have largely expired, leaving many households at risk of taking a huge step back. If labor gains continue at the pace seen in September, it will take almost 18 months for the US economy to return to full employment, so there’s still a large gap to fill (Display). That makes fiscal policy critical as a bridge for household incomes during the gradual expansion to come. 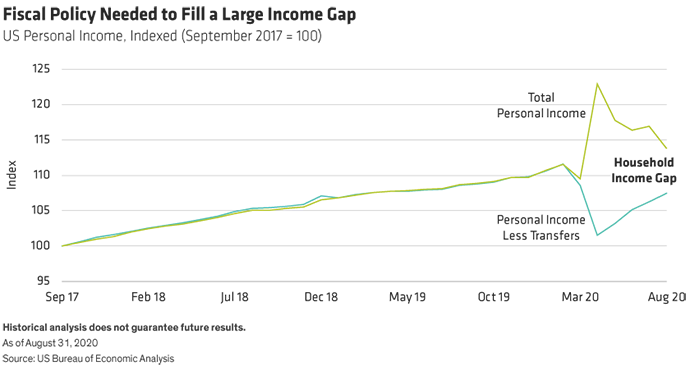 At this stage, we expect Congress and the current presidential administration will eventually reach a fiscal deal that brings more desperately needed support to people who are out of work and industries that are still at risk of insolvency. But the delay in that response likely means that 2021 will start off weaker than previously expected.

The fiscal question factors into the picture of forecast risks that we see as roughly evenly balanced. In other words, an upside surprise is just about as likely as a downside one. Along with the possibility of premature fiscal austerity, renewed shutdowns or other measures to control the virus could choke off economic activity. And, of course, the outcome of US elections could disrupt economic activity.

As for developments that could push the forecast upward, there’s always the possibility that a medical innovation is able to push COVID-19 onto the back burner sooner than expected. A faster and bigger fiscal stimulus package would be a shot in the arm, too. Any or all of these factors would likely warrant a revisiting of GDP forecasts in the coming months.

Eric Winograd is a Senior Economist at AllianceBernstein (AB).

US third quarter GDP was better than expected, though our updated economic forecasts still show a quick but incomplete recovery.

Looking ahead, an upside economic surprise is just about as likely as a downside one.