What Happens to Tax Deferral If Biden Wins?

Polls pointing to a potential Democratic victory have raised questions about tax reform. How might it take shape under a Biden administration—and does it still make sense to maximize tax-deferred savings?

Without question, yes. In a rising tax environment, tax-deferred plans become even more valuable. For a better understanding, let’s first look at the potential changes a new administration might bring.

The Biden tax plan—which would likely require unified control of both the White House and Congress—proposes a number of changes, several of which directly impact the value of tax-deferred savings:

When considering how tax deferral can benefit your personal circumstances, you must consider numerous variables, such as your tax bracket, annual income, and deductions.

For instance, consider a 50-year-old saving in a tax-deferred 401(k), with plans to access the funds in retirement at age 65. To model a baseline, we first ask how the investor would have fared under the existing tax regime. Then we compared the results against two different scenarios using the Biden tax assumptions:

I. The first considers the impact for investors earning between $400k and $1 million per year
II. The second models for those earning greater than $1 million 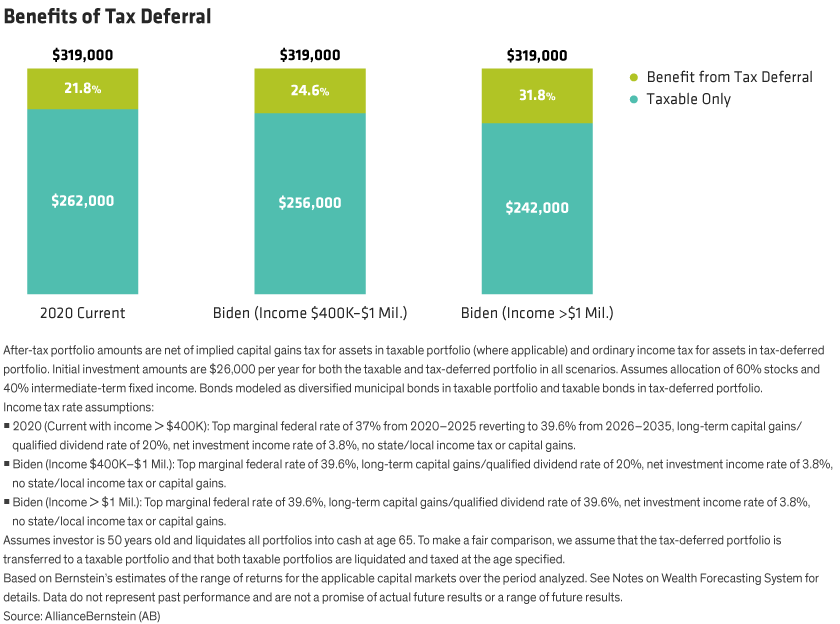 Given political realities, meaningful changes to the tax code are unlikely to pass without Democratic control of the Senate. But even if this occurs, the value of tax deferral endures—especially for those with higher earned income and those who maximize their contributions. This holds true regardless of where one lives but is even more crucial for investors receiving sizable incomes. In those cases, greater burden brings greater benefit.

And even if this occurs, the value of tax deferral endures—especially for those with higher earned income and those who maximize their contributions