What the US Elections May Mean for Corporate Bonds

Just like the presidential candidates themselves, the differences between the political platforms in the US elections are stark. As voters mull their choices, the breadth of potential policies and their implications for credit markets seem as wide as any time in recent memory.

The policy agenda emerging from the polls in November will shape the market landscape for years to come, and fixed-income investors will be watching the outcome of the presidential and congressional contests closely. With Election Day roughly a month away, we take a closer look at the two presidential contenders and what their platforms could mean for credit markets.

If Biden Wins: Climate, Taxes and Wages on the Agenda

Under a Biden administration, we expect the business climate would change dramatically. While revoking executive orders and implementing new policies is more of a process than an event, we expect executive orders around climate change policy would be among the first changes—and the most impactful.

Stronger climate change policies would be good for the planet but would hurt energy and basic material earnings. Exploration and production would be most impacted with more regulation, a potential carbon tax and higher federal leasing rates that would impact production and increase costs. There’s also the potential for a fracking ban on federal lands, but that’s a more remote possibility.

Lower exploration and production levels would lead to lower oil-field services revenue, though the only direct hit to oil-field service companies would come from higher taxes. Oil refiners would see higher renewable biofuel costs and—eventually—the pinch of tighter efficiency standards for cars. Energy pipelines could be impacted by shifts toward greener energy sources and potential litigation.

Higher corporate and individual taxes under Biden would likely fall heaviest on technology, pharmaceutical and media companies. Technology would also most likely face greater regulation around privacy, a headwind for companies dependent on monetizing eyeballs per page. Biden’s call to more than double the national minimum wage would be felt most by low-margin restaurants and retail, though the retail sector would benefit from more trade certainty, and restaurants would be buoyed by fiscal expansion and a larger labor force, given relaxed immigration policies.

We believe that US reengagement with multilateral institutions like the World Trade Organization, as well as the likelihood of greater trade certainty under a Biden administration, would aid most sectors. The boost could be particularly notable for autos, chemicals, tobacco and technology, all of which sell globally.

A second term for Trump would likely mean a continuation of the current policy landscape, though some trade tensions and a smaller labor force due to immigration policy could continue to increase their drag on corporate earnings.

Trump’s tax cuts have boosted corporate margins, and sectors including restaurants and retail have benefitted from shoppers’ higher disposable incomes. The biggest beneficiary, though? The telecom industry, which previously had the highest effective tax rates of any industry.

Trump’s rollback of many existing climate change policies has bolstered earnings for numerous sectors. The biggest beneficiaries are easy to guess—energy and basic materials, both of which also benefitted from deregulation. But modifications to climate change policy have also aided autos, with lower mileage requirements, and the tobacco sector. Restaurants and retail benefited, too.

On the other hand, international trade policy has been contentious, and further deterioration is possible. Trade tensions have affected supply chains, and tariffs have raised input prices and reduced overseas sales. Worsening international trade would strain basic materials such as chemicals, as well as technology, consumer discretionary, retail and restaurants. Stricter immigration policies under Trump have reduced the labor pool and increased labor costs, pinching margins for construction and restaurants.

Where the Differences Aren’t So Big: Fiscal Expansion and Infrastructure

Not all areas of the candidates’ platforms are so far apart. Both favor fiscal expansion to aid the recovery from COVID-19. Though their approaches would almost certainly differ, the construction and consumer-related sectors would thrive, as consumer spending rises with the recovery. Under Trump, we would add technology, transportation and manufacturing to the beneficiaries; with Biden, we’d expect headwinds.

Infrastructure projects are also an area of general agreement, though the focus of each candidate would change the mix of sectors we believe will benefit. Under Trump we’d expect a boost to basic materials, energy exploration and production, and real estate investment trusts (REITs). A Biden presidency would also underpin basic materials but then pivot toward building materials and construction, transportation, and manufacturing.

One area that we expect to feel some pain regardless of the results in November is pharmaceuticals. A bipartisan bill that addresses prescription drug pricing in the US won’t spell disaster but will at least challenge earnings in the future.

For active credit investors, it’s critical to have an in-depth understanding of how individual polices—and even specific pieces of legislation—might translate into industry- and issuer-level impacts. But it also helps to have a big-picture understanding of what presidential policy platforms—as a package—might mean for credit markets (Display). 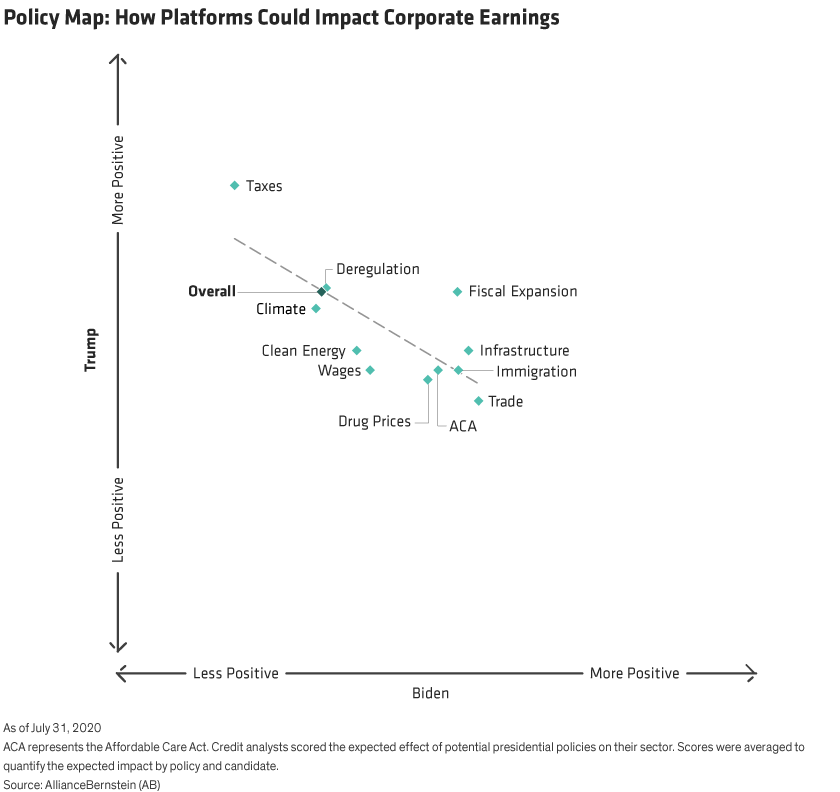 For instance, it’s not surprising that tax policies under Trump have been a boon for credit, as we discussed earlier. That pushes tax policy comfortably into positive territory under the current administration. A Biden administration would look to unwind some of these tax cuts, which would be less positive for corporate profit margins. On the other hand, trade policy would be expected to be more favorable to credit markets under Biden.

And surprisingly, the only noted positive or negative tilt for the Affordable Care Act (ACA) was the potential effect on healthcare REITs, leaving the overall rating for the ACA neutral under both candidates’ platforms.

When evaluating the credit market as a whole, we expect Trump’s policies—given that they would largely be status quo—would be more positive for credit than Biden’s.

With US elections moving ever closer, markets will be increasingly focused on assessing the potential outcomes. In our view, investors should expect more volatility until the election is over and the final results are known. Credit investors should be looking closely at their portfolios, ready to adapt their positioning to the policy framework that will shape risks and opportunities in the years ahead.

The authors would like to thank Nicholas Stern, Credit Research Analyst, for his contribution to this research.

As voters mull their choices, the breadth of potential policies and their implications for credit markets seem as wide as any time in recent memory

If Biden wins, climate, wages and taxes will be on the agenda

A Trump win will mean largely status quo, though both will focus on fiscal expansion and infrastructure