The dramatic listing of Coinbase has rekindled environmental, social and governance (ESG) questions about the cryptocurrency boom. However, we believe concerns about the high-energy intensity of Bitcoin mining are overstated, and the technology can play a less-acknowledged but important role in promoting financial inclusion.

Equity investors were captivated in mid-April by Coinbase’s market debut as one of the world’s largest financial institutions by market capitalization. Beyond the valuation debate, investors concerned with sustainability are asking big questions about the ESG implications of Bitcoin.

Is Mining Bitcoin an Environmental Hazard?

Critics point to the high-energy intensity of mining cryptocurrencies. Bitcoin, for example, has the tightest security structure of any cryptocurrency, which underpins its vast network advantage, and consumes large amounts of electricity to sustain its digital “Fort Knox” status. That said, the network only generates 0.13% of global carbon emissions annually (Display). 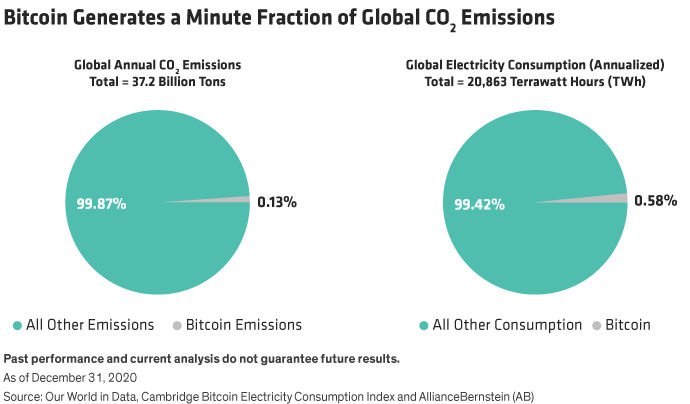 Energy efficiency efforts are under way. Many Bitcoin producers are now migrating mobile mining capacity to renewable energy sources and areas of surplus supply. In fact, Bitcoin miners are constantly seeking the lowest marginal cost of electricity, because the industry is highly competitive. Flared gas in North Dakota is used to power Bitcoin mining rigs, helping to reduce methane emissions. In China, where the wet season generates an oversupply of hydroelectric power, surplus energy is converted into a Bitcoin “value battery,” which is reinvested back into grid efficiency. And Bitcoin’s mobile mining structure means it can be plugged into remote areas of trapped energy, opening opportunities for access to renewable power. Jack Dorsey, CEO of Twitter and payments giant Square, says cryptocurrency will eventually be completely powered by renewable energy and has been investing in the transition. Over time, we believe efforts like these will lead to significant improvements in the energy efficiency of mining Bitcoin and other cryptocurrencies.

Some critics worry that Bitcoin is highly secretive, but we think this is a misconception. In fact, every transaction that flows through the network is immediately broadcast to the world and all the nodes that verify each output’s validity. The transaction is then permanently recorded in a block secured by the miner that wins the right to “mint” the group of transactions.

The ownership, the source of the address and the amount of each transaction are permanently printed onto the blockchain. Anyone with an internet connection can interrogate every transaction and address on one of Bitcoin’s transparent block explorers. The level of transparency is revolutionary and has significant implications for banking security and accountability. It cannot be changed. Every payment is final.

Regulators are paying close attention to developments in Bitcoin’s usage and looking to ensure that misuse of the network is regulated. Chainalysis, a data analytics company, has conducted forensic investigation of Bitcoin’s blockchain and the incidence of nefarious activity is falling; the most recent data estimates that only 0.34% of the network is used for illicit activity.

Concerns over transparency and environmental issues have overshadowed Bitcoin’s benefits in promoting financial inclusion. In 2019, we interviewed a series of financially disenfranchised people as part of a grassroots research project on financial inclusion. We met a Venezuelan migrant who had fled her home country to escape the crippling economic mismanagement of the Maduro regime, where the Venezuelan Bolívar had collapsed and hyperinflation was rampant.

Despite having professional careers, her middle-class family had no choice but to leave. Like many migrants fleeing their homeland, they could not take savings out of the country. In our meeting, we discussed the type of financial technology they use on their iPhones. One was the Coinbase app, a technology that allows individuals to store their savings and send remittances home to their families.

This story illustrates Bitcoin’s use as a revolutionary technology of money. It is not run by any government and only requires an internet connection to open a wallet. Like cash, peer-to-peer Bitcoin buyers don’t need an ID or a bank account and aren’t subjected to a rigorous know-your-customer verification, although purchasing from an exchange requires formal regulated documentation.

In the past, refugees couldn’t carry savings across borders when fleeing a country and often resorted to taking whatever cash they could carry. Gold risked detection by a metal detector. Border guards often extorted cash. But a Bitcoin wallet is stored with a secret 24-word passphrase that secures the balance with a cryptographic code. Access to the private key is memorized and wealth is stored in the holders’ brain.

In liberal democracies, banking systems generally function, and there’s little need for anonymous money. However, globally, about 4.2 billion people live in authoritarian regimes that don’t respect civil liberties and human rights, where governments can ban a citizen’s access to payment networks as a political weapon. Bitcoin separates money from state control and guarantees an individual’s right to their savings.

Many countries are experimenting with Central Bank Digital Currencies. However, these technologies raise concerns over privacy. Every transaction can be easily monitored, and governments can freeze money of political critics or opponents. Certain payments must be spent within specified time limits.

Cash is also subject to political control. In the recent coup in Myanmar, the military shut down the banking system and turned off ATMs. And in India, the government demonetized 85% of the country’s cash overnight in 2016, causing significant hardship, as the entire population was forced to trade in old notes. These examples highlight the potential risks of government-issued fiat currencies.

Bitcoin’s ability to bypass government-issued money is fueling rapid growth. As central banks print money furiously for monetary stimulus, a new wave of interest in cryptocurrencies has been triggered by savers looking to store wealth away from traditional fiat money, which is no longer a cast-iron guarantee of future purchasing power.

This helps explain why Bitcoin’s adoption is growing rapidly in Sub-Saharan Africa and Latin America (Display), where the threat of hyperinflation and collapsing currencies is most severe. Peer-to-peer transactions are gaining ground with individuals swapping Bitcoin, as some governments attempt to restrict trading on exchanges. 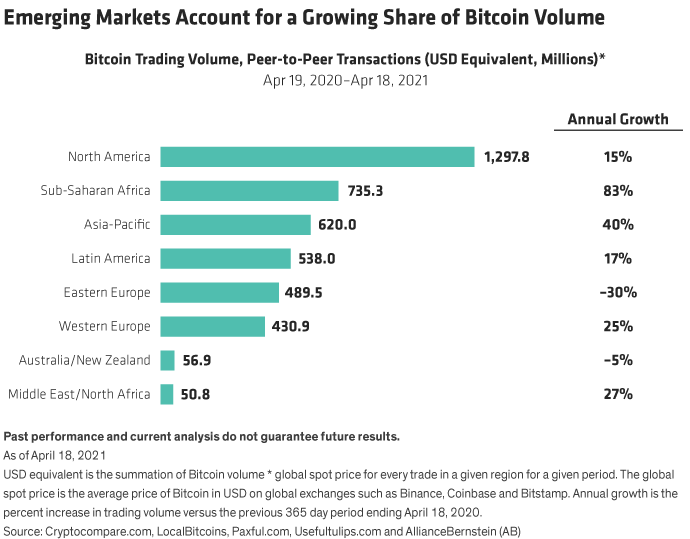 Even in developed countries, not everyone has easy access to payment networks. Lower-income workers, the unemployed and migrants without proof of address make up the unbanked or underbanked. The World Bank estimates that 1.7 billion people around the world don’t have access to a bank account. And even in the US, 67 million adults are unbanked or underbanked, according to the FDIC. For many lower-paid workers, banking fees also cost a higher percentage of take-home pay. And sending money home across borders without a bank account is expensive and cumbersome. Bitcoin’s Lightning Network technology allows micropayments to be sent instantly anywhere in the world, at virtually no cost, via a wallet app and an internet connection.

Bitcoin’s technology offers an alternative route to financial liquidity for the world’s unbanked populations and victims of oppression without access to banking. As the technology evolves, we believe concerns about energy intensity will ease amid new efforts to improve energy efficiency and unlock surplus sources of power. These ESG benefits should be integrated with an evaluation of the growth potential of publicly listed cryptocurrency companies for sustainable equity portfolios.

Bitcoin’s adoption is growing in Sub-Saharan Africa, Latin America, and other emerging markets because it bypasses government-issued money.

Bitcoin’s level of transparency is revolutionary.