Default rates by municipal bond issuers have been remarkably low over the years. It’s an impressive track record, and it explains why defaults by municipal issuers Puerto Rico and Detroit have made front-page news when they happen—they’re actually quite rare.

Why is municipal-bond quality so high—and defaults so infrequent? We can find the answer by drilling into the tenets of fundamental analysis: understanding the quality and predictability of a bond’s cash flows and the attributes of bond issuers that make investors more confident that they can deliver.

Here’s a closer look at five reasons that muni defaults are rare:

1) Security: Muni Issuers Have the Power to Raise Taxes and Fees

The two principal types of municipal debt, general obligation (GO) and revenue, have traits that better equip them to deliver steady cash flows.

GO muni bonds are backstopped by the “full faith and credit” of the issuing government. Whether a GO funds schools, transportation infrastructure or other essentials, the issuer typically has the power to raise taxes to make bond payments. Many states and municipalities need voters’ approval even to issue GOs, and they can’t declare bankruptcy—even in a crisis. In the private sector, most companies can’t claim that type of customer backing or pricing flexibility.

Revenue bonds are backed by fees from public-service enterprises like utilities, toll roads and airports. Those fees are pledged to service debt, and in tough times, issuers can raise user fees to make debt payments. Most tax-exempt revenue bonds are at the top of an enterprise’s capital structure. Typical issues include safety provisions like requirements to set rates in excess of budgeted expenses, restrictions on issuing more debt and requirements to fund reserves to cover unexpected events.

Taxes, for example, are applied across a diverse base of earnings and property values. This creates a steady revenue stream for GO municipal issuers that’s very different from that of a corporate issuer dependent on discretionary spending. If one sector of the economy is hard hit in a recession, other sectors may be less so, allowing the core of the muni issuer’s revenue stream to stay relatively steady.

In a recession, cash is king, and states entered this economic crisis with record-level cash reserves—thanks to mandated-reserves requirements. Both GO and revenue bonds benefit from an embedded culture and legal structure that favors robust reserve funds to weather downturns. As we described earlier, many revenue bonds include mandates for specific cash-reserve levels.

For GO bonds, it’s important to understand how municipalities handle their general fund budgets. We’ve just seen the longest economic expansion on record. What did governments do with these robust tax receipts? For the most part, they added to their rainy-day reserve funds (Display), which helped states and municipalities endure crises without defaulting. 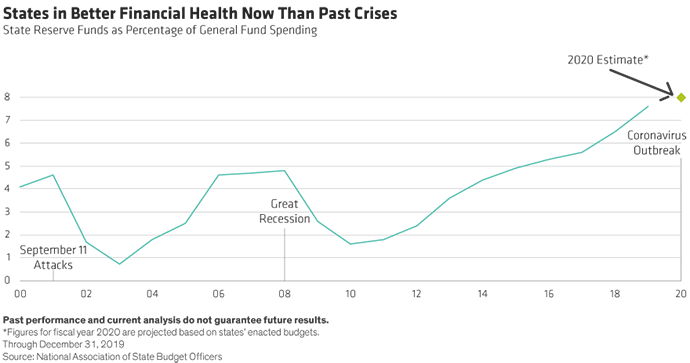 Municipalities have a budgeting advantage over corporations that have to balance bondholder and shareholder interests. Bond investors want cash held in reserve as an added cushion; shareholders want it distributed as dividends. Because municipalities don’t have shareholders to satisfy, they’re free to build reserves when times are good. Stronger reserves mean more wherewithal to avoid missing bond payments during downturns while waiting for revenues to rebound.

Municipal bonds’ repayment structures are typically like those of home mortgages—scheduled payments include a mix of interest and principal repayment. As a result, the bond’s principal shrinks every year, reducing the debt outstanding and deleveraging the issuer. This avoids the uncertainty of making a big one-time principal repayment, which could come at an inopportune time—like during a recession.

In contrast, many corporate bond issues are five years in duration, and principal often isn’t repaid until the maturity date. When that bill comes due, issuers borrow again to repay the principal on the first bond and start interest payments on the new bond. In times of stress, this rolling borrowing can put corporate bond issuers at the mercy of the market.

5) Essentiality: Services Citizens Can’t Do Without

Muni issuers’ promise to pay bondholders is exceptionally strong because most muni bonds support services essential to public good. Almost all of the nearly $4 trillion in outstanding municipal debt is tied to essential services such as education, public safety, electricity, water and waste treatment.

Communities rely on hospitals, toll roads and airports. It’s hard to imagine the population cancelling these services in an economic downturn. And when things get really challenging, as they are now in the throes of the COVID-19 pandemic, the federal government can step in to keep the essentials operating. Most recently, the CARES Act dispatched unprecedented aid to hospitals, schools and other vital entities, with even more under consideration for state and local governments.

Collectively, these five characteristics have made municipal bond defaults a rare event, equipping them to withstand recessions, pandemics and other challenges along the way.

David Ambler is a Municipal Credit Research Analyst and Matthew Norton is Co-Head of Municipal Portfolio Management at AllianceBernstein (AB).

And states are in better financial health than last crisis

A number of muni bond characteristics equip them to withstand recessions, pandemics and other challenges along the way