An Early Spring For Cryptoassets

This blog summarizes our recent white paper on cryptoassets. For more details and discussion, please see the white paper itself by clicking here.

The recent surge in bitcoin and other cryptoassets has been unmissable. Bitcoin has risen 12x over the past year. Only created in 2009, it’s been the best performing asset in the world since then. With a value close to $1 trillion, it’s already around the size of the global venture capital market, one-third the value of all gold held by private investors, and around 6% of the total US money supply.

That’s why everyone’s talking about it, but the price moves aren’t the most important recent developments for cryptoassets and blockchain technology. Significant progress has been made recently on several fundamental fronts.

Still, questions remain for investors intrigued by cryptoassets. We’ve investigated the two most critical questions in our recent white paper, Cryptoassets: Discretion Is the Better Part of Valor, summarized in this blog.

Imagine you were considering investing in a frontier market. Even before you’d think about which stocks to buy, you’d look at economic fundamentals, the rule of law, and other critical factors. The same applies to cryptoassets—regarding security, regulation, and infrastructure. Significant progress has been made on all three in recent years.

Many investors worry about the security of cryptoassets, for good reason. There have been several major hacking incidents. There could also be software bugs. In addition, many early crypto investors, holding possibly 20% of all existing bitcoin, have lost their private codes, rendering their holdings inaccessible.

But exchanges and investors have become much better in recent years at protecting cryptoassets. Some networks, like Bitcoin, now have enormous distributed computing power, making it extremely hard to overwhelm and control the network.

Regulation has always been a major risk to cryptoassets. Yet the trend in the past few years has been encouraging, especially in the US.

First, “Know Your Client” (“KYC”) and anti-money laundering (“AML”) regulations have been established, setting a foundation for compliance. Second, certain banks are now allowed to provide custodial services for cryptoassets—critical for institutional involvement. Third, banks can now contribute computing capacity to blockchain networks and conduct payments with certain cryptoassets. This means a whole new set of digital rails for making payments is being built, incorporating the banks.

Securities laws from the SEC and its global counterparts will also be critical in protecting investors while providing them access to assets that exist in either the physical or digital world.

Do These Belong in a Portfolio?

Our Bernstein Research colleagues ran an optimization for bitcoin and found it could justify only a 1% position in portfolios if you assumed a monthly return of 3% an annualized rate of over 40% because the asset is so volatile. To justify a 5% allocation, you’d need to assume bitcoin would more than triple each year, putting it on par with the entire US stock market in around three years.

Whether that’s realistic or not is in some ways less important than the fact that the method lets you think critically about how much you’d be willing to invest.

Between the fundamental progress and the fact that we have ways to think about the economic value of cryptoassets and their role in a portfolio, we believe it’s worth moving on to the next question…

HOW DO YOU VALUE A CRYPTOASSET?

There’s no holy grail approach here. As a result, estimates for a bitcoin’s value range widely—from $0 all the way to $1,000,000. Where in there is the truth?

In our white paper, we highlight four approaches.

In the Platform Value Approach, we focus on Ethereum, the network behind ether, the second- largest cryptoasset. Ethereum can underpin more uses than Bitcoin—serving as a backbone in games, trading or betting markets, smart contracts, and more. But to develop or use an application relying on that backbone, you have to pay the network to process your activity. 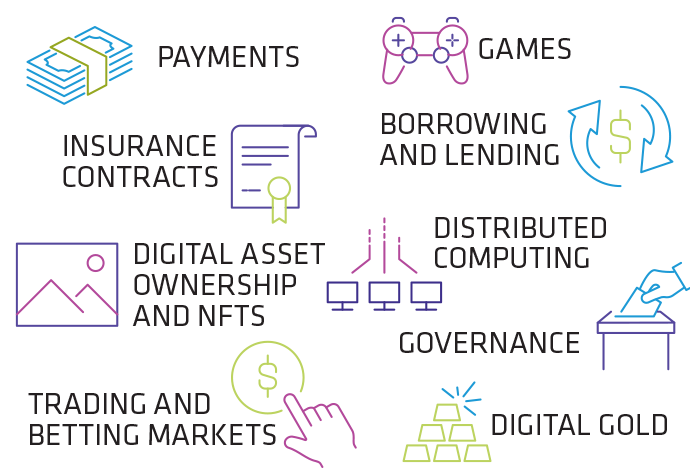 Part of the excitement about cryptoassets is the possibility for the economic value they enable to be passed on to holders of the coin or contributors to the protocol’s network. By thinking about the value these protocols can create and capture, we can estimate the economic value that can accrue to the platform.

But Bitcoin doesn’t enable other activity quite as Ethereum and others do. One of the best approaches to consider its value is the Portfolio Theory Approach.

This primarily means considering bitcoin as “digital gold.” They’re similar in some critical ways—the gold supply is also (somewhat) limited and investors allocate to gold not as a claim to a future cash flow stream, but simply because they think it will go up. Yet they’re quite different as well.

For investors, two items stand out. Volatility tops the list—bitcoin is still several times more volatile than gold and other assets. Just as important is how it behaves—one reason investors are attracted to gold is that it’s historically served well as a disaster hedge. Yet, for now, bitcoin goes up in times of general exuberance and down in times of crisis.

We lay out in the white paper what becoming “digital gold” could mean for bitcoin’s value. While that value would be higher than its current price, it may not be high enough to justify the extreme risk and volatility along the way.

This brings us to the Cost of Production Approach. For many commodities, prices gravitate toward the point where the cost of producing one more unit matches the value of that marginal unit to customers.

But applying this to bitcoin, we encounter a major problem. Bitcoin is designed to be unlike any other commodity in a critical way. Bitcoin’s supply is intentionally preset, effectively cutting the price signal out of the production equation. It does this by making it harder to produce each bitcoin as more producers enter.

As a result, there’s no binding price floor or level to which the price should gravitate. Yet, the approach is still useful because it can indicate how value is captured by different players in the ecosystem.

Finally, we look at the Quant Approaches.

One common heuristic to value cryptoassets is Metcalfe’s Law, which states that the value of the network is proportional to the square of its size (n2). Yet the heuristic is flawed—we take a similar but different tack.

We’ve applied several versions, including our preferred approach including Bitcoin’s computing power and network size, to estimate its value over time. This lets us roughly view the degree of “bubbliness” (or “anti-bubbliness”) at any given point. It also lets us consider what it might be worth in the future. Finally, it provides an idea of what fundamentals might support the price right now.

Yet, this estimate shouldn’t be confused for a value. It will change over time as the network grows or shrinks and as investor preferences change. And it can’t distinguish between temporary and lasting effects. Still, we believe it’s useful.

Valuation can only take you so far. Risk management is critical. Investors need to consider cryptoassets in a light with which they may be less familiar—venture capital.

Accordingly, allocations in the space should be of limited size and funded with assets that aren’t needed in the near (or even intermediate) term and can endure extreme volatility. They should also be diversified within the space. Finally, just as you’d want to make sure that venture capital holdings are fully vetted, investors or their managers should conduct rigorous diligence on each individual crypto holding.

We believe there are logical approaches to the crypto market, but investors need to be cautious. Serious risks remain. Furthermore, much of the recent behavior in the space has looked quite speculative. We expect waves of exuberance and disillusionment with this technology and significant volatility along the way. While the price movements and excesses in either direction may at times attract or dissuade investors, they shouldn’t distract people from the fundamental progress being made in the space. As always, strong investment returns come from a combination of fundamental economic results and differentiated expectations.

If you’d like to know more about our views on cryptoassets and the details behind them, please check out the full white paper, Cryptoassets: Discretion is the Better Part of Valor.

Significant progress has been made regarding security, regulation, and infrastructure in the crypto space in recent years.

Annualized return assumptions are one factor you can use to size a position in cryptoassets.