Banks Roll Out the Welcome Mat for Higher Rates

While the S&P 500 recovered from the pandemic’s shock by the summer of 2020, bank stocks remained near March lows for most of the year. At first, investors were understandably concerned about the potential for heightened loan losses to deplete banks’ capital bases—just like the playbook that unfolded during the Global Financial Crisis. But that didn’t happen. So why haven’t banks, especially the smaller ones, recovered?

For starters, instead of focusing on what didn’t happen, let’s explore what did. Amid the crisis, the US banking system proved strong, and borrowers demonstrated resilience, aided by Congress’s significant fiscal relief. Yet, bank stocks failed to rebound. Though loan losses remained muted, investors fretted that the extraordinarily low level of interest rates would cripple profitability.

Banks’ association with the 10-Year Treasury was to blame (Display). As they have over the last decade, valuation multiples remained tethered to 10-Year Treasury bond yields, preventing bank stocks from joining the broader market rally.

But then rates began to rise.

Interest rates began their ascent in mid-August and accelerated on the heels of the final election results, approval of several effective COVID vaccines, and the passage of additional government stimulus. Massive fiscal spending joins an already easy monetary policy, hitting the economy from both angles, which has strengthened forecasts for US economic growth and elevated inflation expectations for 2021 and 2022. Together, these have pushed rates up, driving both the 10-Year Treasury yield and bank stocks higher. The reason? Banks are one of the few sectors that benefit from higher rates.

In general, interest rates impact banks’ business model in two ways. As banks take in deposits and make loans, the spread between what they pay on deposited funds and charge for loans is known as their net interest margin (NIM). As rates fall, so does the amount banks can charge on loans. However, the cost of funds—what a bank pays on deposits—was already close to zero, which means deposit interest rates could not drop to offset the decline in loan income.

Even after the recent rally, smaller community bank stocks remain historically cheap relative to the broader market (as measured by the Russell 2000 Index) or larger regional banks (Display). The very largest US banks (think household names like JPMorgan Chase or Bank of America) have already recovered and trade near their long-term average valuations. Not so for their smaller bank counterparts. That makes community bank stocks not just an effective hedge for rising rates, but also a very inexpensive one.

We anticipate multiple expansion among community banks this year as they recapture some of the price-to-tangible book (P/TB) multiple lost when the pandemic hit. So far, micro-cap community banks have only reclaimed about half their value (Display). We expect further normalization throughout 2021, driven by a combination of rising rates and the return of smaller bank M&A. M&A picked up in late 2020 among larger banks—driving a rally—but it’s been slower to resume for small banks. Some investors fear rising rates may discourage business combinations. But bank M&A is a secular trend that historically has not been driven by rate cycles. 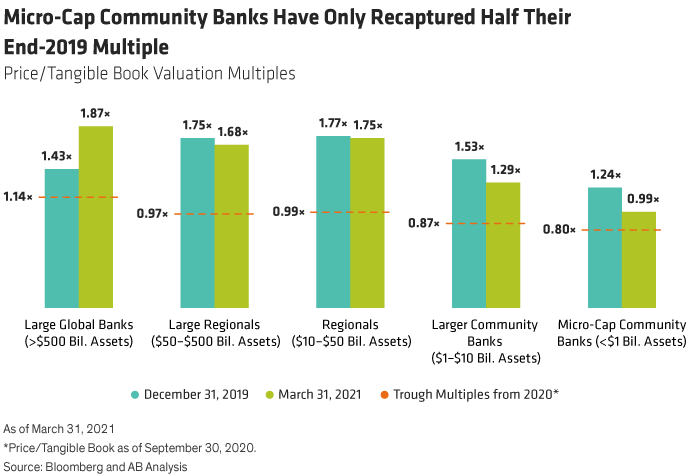 Not the Banks of Yesteryears

A funny thing happened on the way to this crisis; banks didn’t suffer significant loan losses, and they remained profitable, despite the recession. Yet, investors didn’t care. Today banks—especially the smaller ones—enjoy multiple tailwinds from rising rates, cheap valuations, and pent-up M&A demand. Will investors take notice now? They should.

Bank stocks remained near March lows for most of 2020.

But as interest rates rise, banks should benefit.