Should You Give SPACs a Shot?

Just when you thought you’d seen it all in the financial markets, a little-known investment vehicle comes out of the woodwork. SPACs, or special purpose acquisition companies, garnered nearly as many headlines as cryptocurrencies last year. But SPACs aren’t new, nor do they comprise a large part of the market. So why the buzz?

Nearly half of 2020’s IPO volume—more than $83 billion in blank-check proceeds—were SPACs1 (Display). While that’s more than six times greater than the previous peak, 2021 is shaping up to be another breakout year.1 But just because SPACs are sparking attention, should high-net-worth investors join in the fray? The answer lies in understanding how SPACs work, unpacking their historical performance and comparing them to private equity. 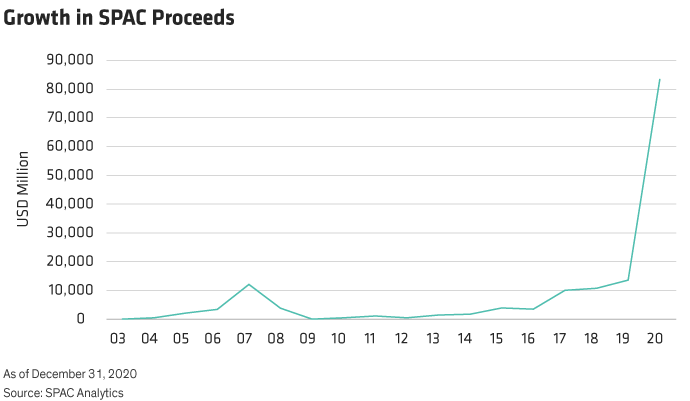 What to Expect from SPACs

A SPAC is an acquisition vehicle designed to combine with a single non-public company. Essentially, SPACs bring their acquirees public via a “back door” that subverts the standard IPO process somewhat. Once the SPAC merges with its target, shares of the combined successor company then trade on an exchange like any other public stock (Display).

To reap the greatest benefit from a potential combination, individuals typically invest before the SPAC identifies a target, either by participating in the SPAC’s IPO or buying its shares in the secondary market. SPAC shareholders don’t know the identity of the non-public entity in advance, nor can they direct the SPAC toward a specific company. But they are protected if they don’t like a proposed deal or if the sponsor fails to finalize a merger in the allotted 24-month time frame; holders can redeem their shares at the trust’s value before the completion of the SPAC’s merger. In these cases, the SPAC returns the investor’s total pro-rata share of the cash held in trust.2

The Short and Long of It

SPAC’s downside protection via their trust redemption option tends to lure short-term investors—typically hedge funds—to pursue a trading strategy: shareholders who never intended to own the combined entity either sell the SPAC in the secondary market above their initial cost basis prior to merger or redeem their shares at trust value. But the process for redeeming shares for trust value is detailed and requires experience to correctly execute.

Investors interested in holding the combined company over a longer-term horizon should weigh several other considerations, notably:

Despite recent high-flyers like Nikola, DraftKings, and Virgin Galactic—each of which is up over 300% from their IPO3—SPACs haven’t fared better than public stock indices historically. Since 2010, SPACs have consistently underperformed US small-cap companies by at least 10% in the year after completing their merger.4 Comparisons to alternate acquisition vehicles, namely private equity funds, are even more underwhelming. With its proven long-term strong performance, PE returns rank on par with or exceed returns from the US public market over nearly every investment horizon (from one to 30 years).5

The Match-Up: SPACs vs. Private Equity

Like SPACs, private equity funds also focus on acquiring private companies, though they do so with a vastly different structure (Display).

While SPACs seem to be the flavor du jour, they don’t make sense for many investors. Instead, high-net-worth investors interested in making private company investments would benefit more from the diversification and aligned incentives of private equity funds with proven sponsorship.

But private equity is a superior way to acquire private companies due to diversification benefits, fee alignment, and a record of strong, proven returns