What a Recent Senate Ruling Means for Tax Changes

On May 28, Senate Parliamentarian Elizabeth McDonough threw a procedural wrench in the Democrats’ plans, opining in effect that Republican cooperation will be required before any further legislation may be adopted in fiscal year 2021 using the budget “reconciliation” process. Fiscal year 2021 ends September 30.

Reconciliation, which requires only 50 votes in the Senate along with the vice president’s consent, was used to pass the American Rescue Plan Act of 2021 on March 10. Less than four weeks later, on April 5, the parliamentarian informed Senate staffers that reconciliation could be used again during fiscal year 2021 but did not elaborate on particulars. Those particulars, it turns out, may delay enactment of many or all the legislative initiatives, including tax proposals, set forth by President Biden in his address to a joint session of Congress on April 28. Some of those initiatives were already in question due to a lack of support from moderate Democrats.

In a nutshell, the parliamentarian’s May 28 guidance indicates that any reconciliation bill going to the floor of the Senate must first be approved by the Senate Budget Committee, which consists of 11 Democrats and 11 Republicans. Ordinarily, an 11-11 split would be enough to get a bill to the Senate floor, but the Republicans could block that result by unanimously boycotting any vote on the bill. Such a boycott would deny a quorum in the Budget Committee and stall the bill indefinitely.

What are the Democrats’ options?

Does that mean tax legislation is dead? Not necessarily. The Democrats have several options, including:

Retroactive Changes to the Tax Code

Beyond the legislative particulars, taxpayers are also trying to gauge when potential changes would take effect. If Congress decides to turn back time, that leaves less wiggle room to plan ahead.

Currently, there is no serious proposal that would change gift or estate taxes, including the current $11.7 million basic exclusion amount, in any material way prior to January 1, 2022. But President Biden has proposed a near doubling (from 20% to 39.6%) of the long-term capital gains tax rate, effective retroactively to April 28, for taxpayers with income greater than $1 million.1

Making such a tax increase effective in the middle of a year, so that there would be two rates—one before April 28, and another on and after that date—may be difficult to administer. A rate increase that is retroactive back to January 1 or a “blended” rate that is effective for the entire year would make more sense. It’s not clear whether moderate Democrats will support the scope or timing of the president’s proposal. But one thing is clear: The parliamentarian’s guidance, which may postpone enactment of any tax increases until October or later, makes retroactive application of a capital gain tax rate increase less likely to gain support from moderates.

Is the Step-Up on the Chopping Block?

Retroactivity isn’t the only wrinkle. Proposed legislation in the House and a draft Senate bill would (1) effectively eliminate the so-called “step-up” in the income tax basis of most assets at death and (2) impose a deemed realization of taxable gain upon the occurrence of certain events, including death (Display).2 At present, it is unclear whether such a tax on gain would be in addition to any estate tax that otherwise may be payable.3 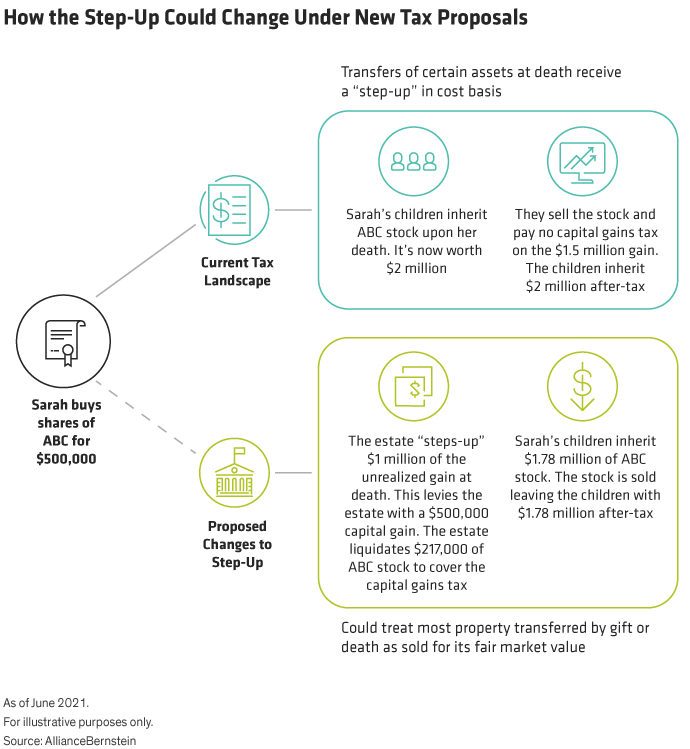 While technically income tax provisions, these changes, if enacted, would materially change wealth transfer planning. For example, tax-sensitive investors may choose to invest through institutionally priced private placement life insurance products, which pay a “stepped-up” cash death benefit upon the death of the insured.

The proposals to eliminate the basis step-up and impose a deemed recognition of gain at death do not appear to have wide political support. A prior attempt to eliminate the basis step-up in 1976 was repealed before it ever became effective; however, the digitization of records over the last 45 years could make administration of these new proposals possible in a way that was unimaginable in 1976. For example, the IRS has mandated cost basis reporting on financial accounts for the last decade. Practical considerations aside, these proposals would raise significant revenue, and in the current environment, potential revenue raisers cannot be completely dismissed.

You Still Have Options

Although the legislative landscape is unclear, taxpayers should continue to evaluate and, when appropriate, implement tax-saving strategies:

The Senate parliamentarian’s ruling is the latest twist in an ongoing saga that’s likely to unfold throughout the summer. And as proposals wend their way through the legislative corridors, changes are inevitable. This creates uncertainty while reinforcing the need for thoughtful, personalized advice tailored to each taxpayer’s unique circumstances.

1 Under President Biden’s proposal, long-term capital gains and qualified dividends of taxpayers with adjusted gross income of more than $1 million would be taxed at ordinary income tax rates, with 37% generally being the highest rate (40.8% including the net investment income tax). A separate proposal would increase the top ordinary individual income tax rate to 39.6% (43.4% including the net investment income tax) beginning January 1, 2022. See General Explanations of the Administration’s Fiscal Year 2022 Revenue Proposals, Department of the Treasury (May 2021), https://home.treasury.gov/policy-issues/tax-policy/revenue-proposals.

2 For example, the House bill, H.R. 2286, would treat most property transferred by gift or at death as sold for its fair market value on the date of such gift or death. The bill would also exclude from gross income up to $1,000,000 of capital gain from transfers at death.

3 Although H.R. 2286 does not provide that the tax imposed on gains deemed realized at death would be deductible on the estate tax return of the decedent’s estate, President Biden’s plan, as outlined in the General Explanations of the Administration’s Fiscal Year 2022 Revenue Proposals, does.

The Senate parliamentarian’s ruling is the latest twist in an ongoing saga that’s likely to unfold throughout the summer.

While some changes are on hold, others could still come to fruition.