As risk assets tumbled in late February and March, it intensified the focus on risk management: How can multi-asset strategies defend against turbulence while positioning for an eventual rebound? The answer: Be ready to adapt—and to do it quickly.

A decade-long bull market ended abruptly as markets wrestled to understand the impact that the tragic spread of the coronavirus (officially COVID-19) would have on the global economy. With a sizable buildup of long positioning, the dam broke quickly. At one point, global stock markets fell by over 25% in 16 days—the fastest drop of such magnitude in 55 years (Display). 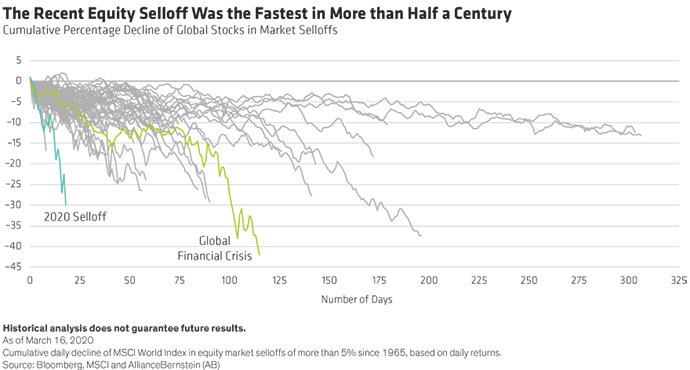 The market downturn didn’t discriminate, taking many typical defensive exposures with it. Essentially, the entire risk market was reset, with nearly all correlations up. By mid-March, stocks had dropped to bear-market territory in about one-quarter of the time it took to reach that threshold during the global financial crisis (GFC).

Historical Perspective on Selloffs and Recoveries

The urge to de-risk is understandable, given the rapid, unrelenting sell-off and the challenge in identifying solid ground for an eventual bottom. Taking some risk off the table makes sense, but history shows that down markets eventually regain lost ground—though the time frame is unique in each case.

In nearly 100 sell-offs stretching back over a half century, fast sell-offs have generally been followed by fast recoveries. In shallower sell-offs—10% declines, for example—markets tended to return to a breakeven point or their previous peaks in about the same time it took them to reach bottom. So, if it took 50 days for a 10% sell-off, it took the same 50 days for stocks to recoup those losses.

But a couple of outliers pre-2000 bounced back much faster. If we look at the experience since 2000, equity markets recovered in about one-and-a-half times the number of days it took them to reach bottom. If the current sell-off had stopped at 10%—which it didn’t, of course—history would have suggested a two-week rebound.

The current sell-off has cut much deeper. At one point in late March, global equities were down more than 30% from their previous peak. And until the public-health situation around the coronavirus eases, it’s hard to identify a bottom and when the road back will start.

This has been the case in past challenges, most notably the bursting of the technology bubble in 2000 and the GFC (Display). When the tech bubble deflated, it took 656 days—almost two years—for stock markets to bottom out, and over 1,000 days for them to recover the losses. Stocks hit bottom faster in in the GFC—in 211 days. But it still took more than 1,000 days for them to work their way back.

Of course, the GFC sell-off stemmed from the massive collapse of an overstretched financial system, which took a very long time to repair. This time around, large swaths of the global economy were effectively switched off in efforts to increase social distancing and flatten the curve of the virus.

Before that shutdown, the economy had been posting solid growth. “Erasing” multiple quarters of growth no doubt creates a deep wound, but it’s our view that if public-health, monetary and fiscal policy efforts are effective, growth will ultimately rebound more quickly this time.

Financial markets are likely to be looking ahead—not at the current state—as they assess the potential for a recovery. But the current state is highly volatile. So, multi-asset strategies must calibrate their exposures dynamically to address both perspectives when calibrating risk-asset exposure.

We think it’s important to integrate many signals, but you could sum up the current situation this way: our bearish signals are flashing red—understandable, given so much volatility and uncertainty. But we’re seeing green flashes from our fundamental signals, which include not only valuations but inputs like quality, stimulus and inflation.

Given our view that markets will ultimately recover—but at an unknown pace—we think it makes sense to meaningfully underweight risk assets—including stocks. This is to acknowledge higher volatility as everyone seeks more clarity on the impact of COVID-19 headwinds, policy responses and the breakdown in OPEC negotiations.

But that positioning must be highly dynamic, because the sell-off and recovery won’t happen in a straight line—as we’ve seen very recently. Recent policy actions to flatten the COVID-19 curve, bolster liquidity and stabilize markets were encouraging, arguing for a slightly reduced equity underweight. When markets reacted perhaps a bit too enthusiastically to this policy progress, it would suggest taking a little more risk off the table.

These day-to-day swings make it abundantly clear that multi-asset investors must adapt their positioning nimbly as signals change—striking the right balance between risk and opportunity. There’s risk in volatile—and sometimes punishing—markets. But there’s also risk in being caught with too little exposure to opportunity as markets rebound. Markets are dynamic—and multi-asset positioning has to be dynamic, too.

Markets will ultimately recover—but at an unknown pace

Positioning must be highly dynamic, because the selloff and recovery won’t happen in a straight line