Global equity markets advanced in the third quarter but pulled back from 2020 peaks during September. Market moves were dominated—both up and down—by a very small group of giant US stocks. How should investors react?

During the third quarter, global equities rose by 6.7% in local currency terms, with most markets in positive territory (Display, left). But for the year to date, return patterns have been extremely dispersed, with US stocks leading and the tech-heavy NASDAQ index surging by 25% for the year, while European and UK stocks declined (Display, right). 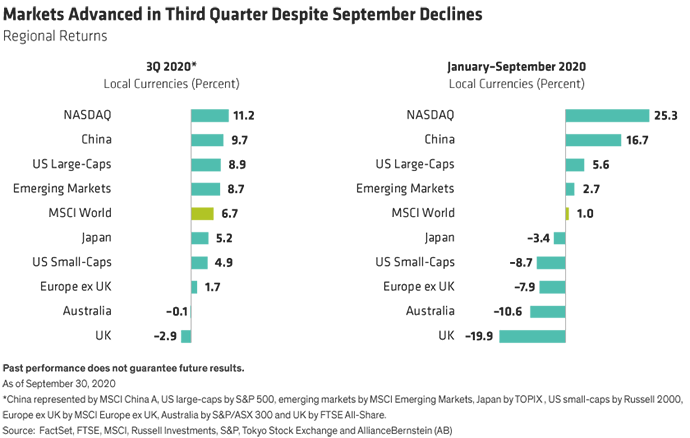 Five of the largest US stocks have dominated US market gains. And in September, as the MSCI World Index retreated by 2.9% from 2020 highs, these same stocks sold off more sharply than the rest of the stocks in the S&P 500. When excluding Facebook, Apple, Amazon, Alphabet (Google’s parent), and Microsoft from the S&P 500, the US market hasn’t moved much at all this year (Display).

Why Did Markets Sell Off in September?

Market declines in September reflected real concerns. Investors were anxious about the inability of the US Congress to agree on additional fiscal stimulus and the growing risk of a chaotic US election outcome against a backdrop of rising COVID-19 cases in much of the developed world. This uncertainty manifested itself in the most popular segments of the market—US technology, growth and momentum stocks. The biggest companies in this cohort have benefited this year from long-term growth trends that were accelerated by the pandemic. Yet given their high concentration in key benchmarks, the US mega caps dragged down the market in September.

From late March to September, market gains were driven by a powerful combination of unprecedented monetary and fiscal stimulus. There are good reasons why ultralow interest rates and spending stimulus should continue to support stocks, in our view. That said, we also believe that the September pullback was a healthy development, as prices for many stocks may have gotten ahead of fundamentals, and market gains largely had been driven by a very narrow group of stocks.

But that’s not all. Apple’s weight in the MSCI ACWI is now greater than the entire UK market. Microsoft and Apple combined are worth more than the entire Russell 2000 Index of small-cap stocks. And even after the September declines, the combined market value of the largest 100 US companies was still greater than all non-US developed markets combined (Display below). 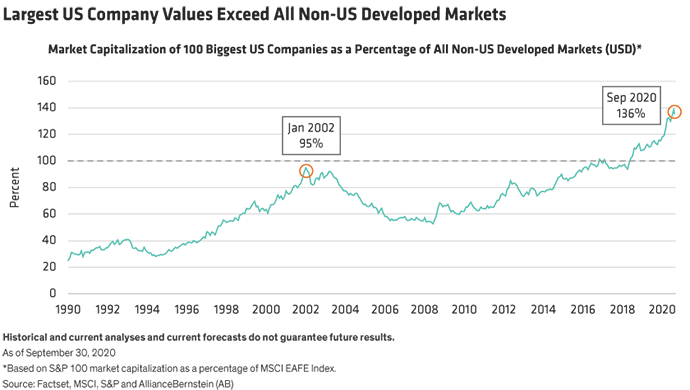 For investors who haven’t held large positions in the US growth giants, this year has been frustrating. Portfolios without heavy exposure to these names have underperformed. And, after all, these stocks aren’t like the dot-com dreams of 2000, many of which evaporated when the tech bubble burst. Today’s mega caps have truly distinctive capabilities that are in high demand during the pandemic and strategic business models that support long-term growth.

So why shouldn’t investors simply pile into these five stocks? There are several reasons why a heavy weighting to this cohort could add unintended risks to a portfolio.

First, these stocks have been driven by momentum. Our research suggests that a portfolio of all five mega-cap stocks benchmarked to the S&P 500 would have about 25% of its risk tied to the momentum factor. And momentum is the second-most volatile factor in global equities at a time when volatility is near a record high over the last 10 years (Display, left). Second, investors have pumped massive flows into the technology sector. For example, this year through August, about $48 billion of worldwide fund flows have been directed to technology portfolios compared with just $1.1 billion in all of 2019, according to Morningstar data (Display, right). That trend can quickly reverse if sentiment toward technology stocks changes. 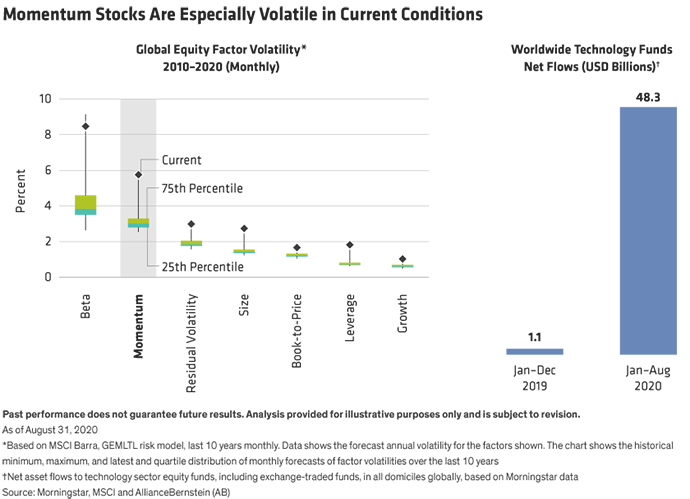 Third, increasing concern about the dominance of the giant technology and technology-driven consumer companies is raising the risk of a regulatory crackdown. It’s impossible to predict how new regulations will unfold—especially in an election year—but such efforts could inflict a big blow to their business models and future profitability. And finally, holding all these stocks exposes investors to significant concentration risk from a group of stocks demonstrating very similar performance patterns. That means bad news for one company could affect the share prices of the entire group.

To be sure, we’re not saying investors shouldn’t own any US mega-cap stocks. However, we believe that these companies should be held at appropriate weights, aligned with a clear investing philosophy backed by fundamental research and subject to rigorous risk controls.

Risk management is essential in the current environment. Even with strong policy forces supporting equity gains, sources of volatility abound. The world is still racing for a COVID-19 vaccine that can help countries fully reopen their economies. Social unrest in the US has highlighted the polarization of the US public ahead of a heated election that may yield a disputed outcome after the November vote. And President Trump’s diagnosis with COVID-19 at the beginning of October added more uncertainty to the markets.

Different election outcomes may compound investing risks. Gridlock in Washington could thwart stimulus efforts, while regulatory moves—particularly in technology and financials—are hard to predict before the polls. It’s also notoriously difficult to predict how markets will respond. In 2016, it was widely believed that a Trump victory would lead to pressure on markets, but, in fact, post-election volatility was short-lived and gave way to sustained equity market gains.

Meanwhile, in Europe, Brexit was still a source of uncertainty by quarter end. US-China trade tensions remain unresolved. And China and India recently faced off along the Himalayan border, stoking fears of a military confrontation between the world’s two most populous nations.

So how can investors position in equities in such a risky environment? Is it possible to create an allocation that won’t be overly susceptible to geopolitical risk or market-concentration risk? We think the following guidelines can help point the way. 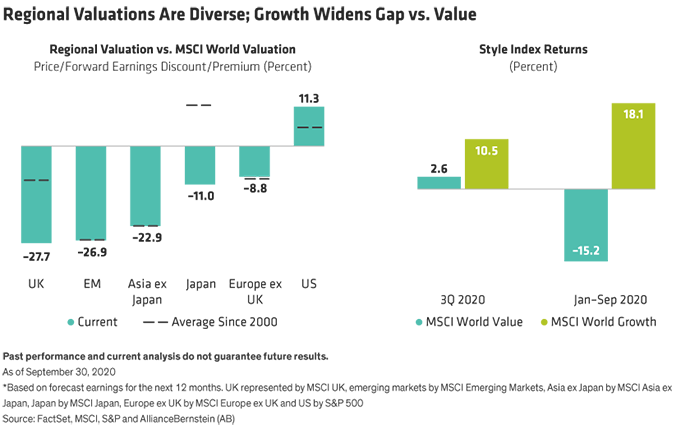 It’s tempting to follow the crowd into the most popular and best-performing stocks. But if anything, market trends in September serve as a reminder that what goes up sharply can also come down quickly. In a market saddled by diverse hazards, we believe fundamental research that seeks to broaden a portfolio’s sources of risk and return is more important than ever to build equity portfolios with short-term shock absorbers and long-term staying power.

Giant growth stocks have driven the market's moves this year