Is the Market Missing the Boat with Community Banks

Bank stocks remain out of favor since the Global Financial Crisis (GFC), given their starring role in the collapse of the mortgage market and subsequent global recession. Investor caution is understandable, especially as recessionary fears weigh on sentiment and punish share prices. Investors seem to fear a replay of the GFC, but we think those concerns are overblown. Here’s why.

PPP Is an Unrecognized Boon for Small Banks

The CARES Act, signed into law in March to backstop the economy, designated banks as the transmission mechanism for its Paycheck Protection Program (PPP). And while the market may not acknowledge it, this represents a positive development on several fronts. First, the decision sends a clear signal that the government and regulators view banks as part of the solution to this crisis, as opposed to part of the problem like during the GFC.

Investors also underappreciate PPP’s benefit to smaller banks. While the largest banks have garnered the lion’s share of the headlines, PPP represents less than 5% of loans at most of these institutions. In comparison, PPP loans comprise 16% of the average small bank’s total loan mix, according to SEC filings (Display). 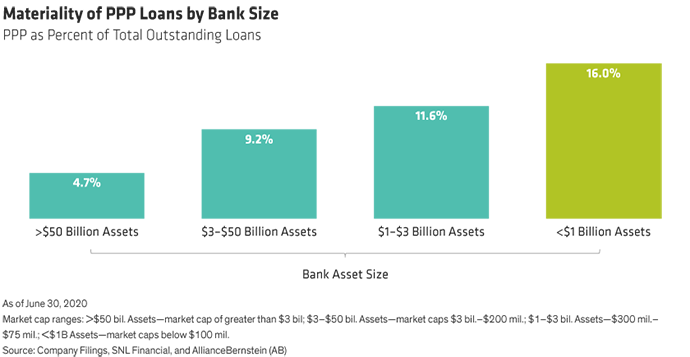 Why does this matter? These government-guaranteed loans carry an upfront origination fee of up to 5%, which could translate to massive earnings power. We estimate that for banks with up to $1 billion in assets, these fees can deliver about half of 2019’s pre-provision earnings on average. And for some banks, participation in the program could lift tangible book values by more than 5% in the second half of this year. This ultimately reduces the current average price to tangible book value (P/TBV) multiple from 0.80x to 0.75x, significantly lower than the industry’s long-term historical average of 1.21x.

Beyond the short-term financial boost, the longer-term ramifications of administering PPP funds cannot be ignored. While many larger banks failed to come through for clients during a time of great need, community banks became a lifeline—a valuable resource upon which they can build relationships and acquire new customers.

It’s All in the Mix

Community banks typically make loans that are secured by real estate—residential or commercial mortgages (Display). While “mortgage” still carries some stigma from the GFC, these loans tend to consistently deliver and generally outperform other types of bank loans over full credit cycles. By contrast, larger banks focus on other consumer lending categories that generally carry more risk—such as credit cards—and the commercial loan segment, which is unsecured by real estate. This difference helps smaller banks experience lower losses—about half that of their larger counterparts, on average.

Besides fewer write-offs, residential mortgage exposure also benefits from the current interest rate environment. While lower rates are compressing net interest margins for many banks, they are also boosting the origination and sales of residential mortgages amid a refi boom and strong demand for purchases. Small banks on average have about double the revenue exposure to this mortgage origination business.

Forgiven PPP loans and accelerated recognition of the origination fees will build upon community banks’ capital ratios in the second half of this year. In addition to supporting loan growth and maintaining or increasing dividends, we expect they’ll deploy this excess capital in two main ways: through share buybacks and by acquiring smaller banks. Mergers and acquisitions have slowed during the pandemic, to a rate of less than half of the six-year average, but smaller banks still have the flexibility to make share repurchases. Unlike large banks, that are under greater political and regulatory scrutiny, the smaller ones can take advantage of the current trough valuation multiples to buy-in their own shares and drive higher tangible book value and earnings per share.

Waiting for industry consolidation to pick back up? We expect deal-making to roar back in 2021. And when it happens, shareholders of the selling banks should receive a premium, while consolidation should push valuation multiples toward the more normal range.

We foresee pandemic-driven credit defaults—some of which may approach levels seen during the GFC—peaking by mid-2021. But in every prior cycle, bank stocks troughed 1–2 years before peak loan losses and tended to move sharply higher within a few quarters of bottoming. And despite elevated losses, we expect the US banking industry to remain profitable (unlike during the GFC).

Ultimately, within 12 months, we could see a scenario where small banks trade above the trough valuation of 1.05x—which would mean more than 30% upside from today’s levels. Along the way, tangible book values should rise if profitability persists. And the sweetener for investors? A dividend yield that’s higher than other income-producing assets, like REITs. Though capital appreciation may take some time, investors would be rewarded while waiting.

Discover how community banks today are different from during the GFC.

After banks fueled the mortgage market’s collapse, many investors remain on the sidelines

And investors fear the headwinds currently facing many community banks