Should You Donate Company Shares Before an Exit?

Philanthropy is important to many privately held business owners who often include charitable endeavors as part of their post-exit plans. Yet even those who earmark exit proceeds for their favorite nonprofit sometimes fail to appreciate the savings that charitable planning can create. That helps explain why many business owners overlook philanthropy in their pre-transaction planning.

Consider Mr. and Mrs. Donnor, who just engaged an investment banker to explore exiting their business. Before selling, the couple wanted to secure their lifestyle spending and provide for their children and grandchildren. They also wished to endow a gift of $1.0 million to a private foundation or donor-advised fund (DAF).

To help them think through funding the gift, we first considered all the assets they could utilize. Cash would be plentiful after the sale, but they also had a $4.0 million joint investment account invested in securities with a cost basis of $2.0 million. One approach they hadn’t explored? Donating shares of their company—an S corporation—before the exit.

Every investor must weigh the pros and cons when giving different types of assets (Display). In helping the Donnors think through donating the S corporation shares, we considered the following: 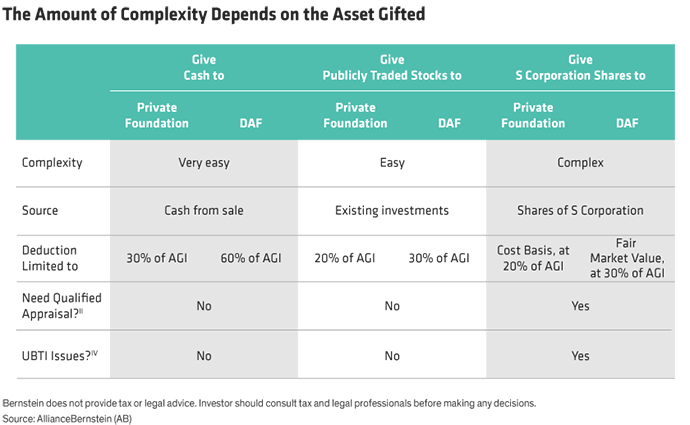 To help the Donners identify the best option, we calculated the effective costvi of their $1.0 million gift. This accounts for the benefit they receive from both the income tax charitable deduction and from avoiding any embedded tax liability on the assets gifted. The results surprised the Donnors (Display). 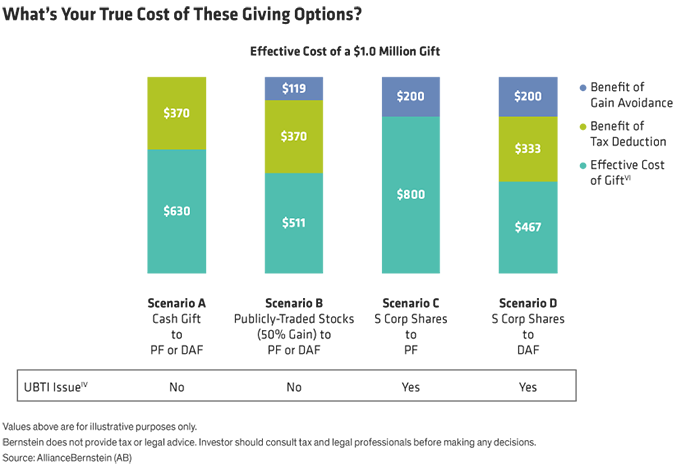 Their initial plan to give cash represented the path of least resistance—though inferior to giving highly appreciated stock from their investment account. Ultimately, donating shares of their company to a DAF (Scenario D) prior to the transaction generated the lowest effective cost. The trade-off? Owning private business shares would create UBTI for the DAF, which would leave less than $1.0 million in the DAF after paying the tax bill.

Perhaps most surprising was that giving pre-transaction shares to a private foundation resulted in the highest cost. Because the deduction for a gift of S corporation shares is limited to their cost basis (which was zero), the Donnor’s main tax benefit was avoiding capital gains taxes that would otherwise be paid at a 20% rate. Plus, unlike the DAF, the private foundation would be subject to a 1.39% excise tax on net investment income going forward. These complexities help explain why giving shares pre-sale to a private foundation tends to be suboptimal.

When it comes to giving, there is no one-size-fits-all strategy; what’s right for your family might not be right for others. Business owners must weigh several factors—including the type of business, timing of the sale, assets available to give, and the ultimate goal of where they want the gift to reside. Because they were indifferent between vehicles, the Donnors ultimately decided to fund a DAF using S-corporation shares (the lowest effective cost solution). However, if they had chosen a private foundation, they would have funded it with appreciated stock.

i The gain could be taxed to the donor under the “assignment of income” theory.

v The UBTI that a charity pays will depend on whether it is structured as a trust or a corporation. Section 511(a) and 511(b).