Should You Tap Your 529 Plan to Pay for Private School?

Parents looking to fund their children’s private elementary or secondary school have a new avenue to consider. Recent tax law changes now enable families to withdraw up to $10,000 per year per beneficiary from a 529 savings plan to cover eligible private school expenses while preserving the plan’s original tax-favored treatment.

At first glance, this may seem like welcome relief. According to the Private School Review, private school tuition costs varied from $2,562–$14,338 for elementary school and $5,262–$31,567 for high school for the 2017–18 school year. But a recent study showed that fewer than 20% of parents who have 529 plans are seriously considering using them for their child’s pre-college private education. Why? There are two key hurdles, in our view.

The beauty of a 529 college savings plan lies in its tax-free growth. There are no capital gains taxes, no income taxes on interest income and—provided funds are used for qualified educational expenses—no federal income taxes on withdrawals. Over time, the compounding of tax-free earnings growth can prove quite meaningful.

For example, parents who open an account when their child is born could benefit from nearly a two-decade-long investment time horizon. The case becomes even more compelling if they take advantage of accelerated gifting. Under this special 529 plan provision, parents can gift $150,000—five times the annual gift tax exclusion for married couples—to a 529 plan. They won’t incur any federal gift taxes (provided they do not make any additional contributions to the 529 plan or any additional gifts to their child over the subsequent five-year period) and the funds will be removed from their taxable estate.

Unfortunately, tapping the account prematurely, such as when the child starts kindergarten, undermines its growth potential. And since a portion of the funds may only be invested for five years, it’s likely to require a more conservative asset allocation.

Not All States on Board

There’s another wrinkle. While the new tax law expanded the ability for people to use 529 plans to pay for private elementary and secondary school, not every state has caught up. Years ago, when states originally crafted legislation to establish their 529 plans, many earmarked the funds specifically for “higher education.” Applying the savings towards primary and secondary education would require the passage of new legislation, which may be easier said than done. As of May 1, 2019, a number of states still haven’t amended their tax code to conform.

It’s important to know whether your state is one of them (Display). Many states allow residents to claim a tax deduction or credit for contributions to any state’s 529 plan, with maximums varying by state. However, such tax breaks only extend to withdrawals made for qualified expenses.

Parents in noncompliant states who have already received state tax deductions could face surprise tax bills, penalties, or administrative headaches if they dip into their accounts prematurely. Consider California. Using 529 proceeds towards private school tuition there would result in zero federal taxes or penalties. But under the state law, penalties of 2.5% on the amount withdrawn would apply.

Another operational hurdle? Not every private K-12 institution has figured out a way to accept 529 plan funds. So while it may be tempting to draw on 529 plans to pay for private school tuition, it probably makes more sense to leave the funds untouched. 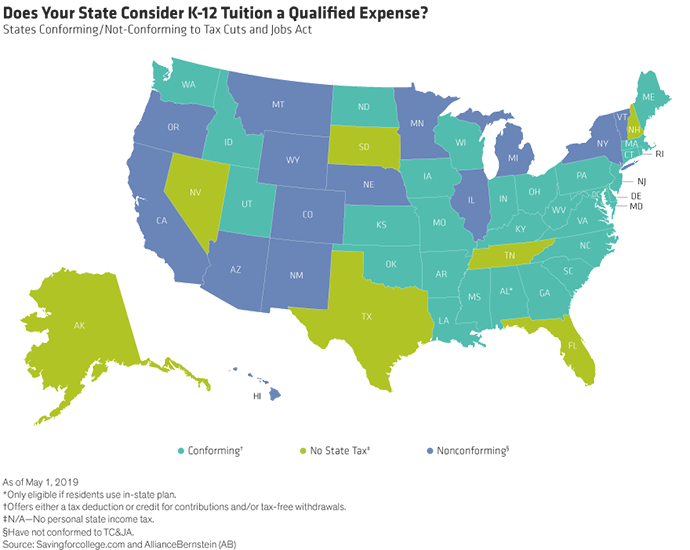 But there are two key hurdles in our view