The End Game: How Governments Might Tackle Debt Burdens

The COVID-19 pandemic has caused enormous dislocations in the world economy in a shockingly short time. The wave of policy support unleashed in response has stabilized activity, but it has also inflated an already sizable debt overhang. Governments now face difficult choices on how to address it.

Public-sector debt in developed economies was already at record highs before the pandemic (Display). The massive amounts of fiscal spending we’ve seen to date (with more likely) could boost it by as much as 20% or more of gross domestic product (GDP) in many countries. 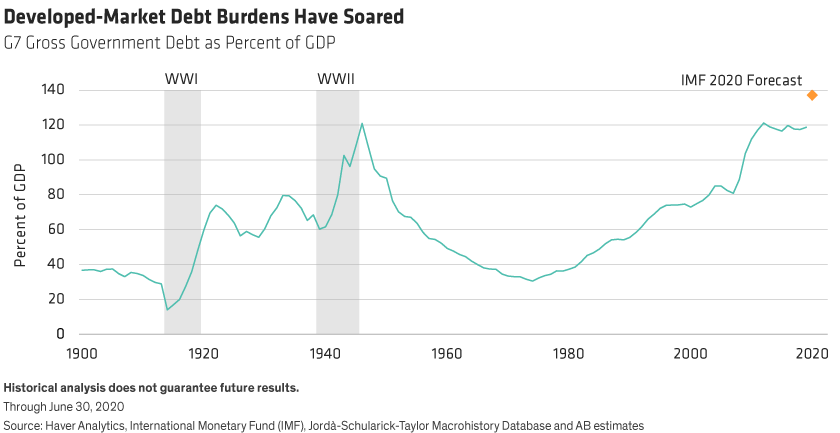 Some argue that mounting government debt is simply a natural by-product of secular stagnation. In this view, if the private sector isn’t spending enough—a situation COVID-19 will likely exacerbate—the government must spend in order to avoid a depression. Others, more aligned with our view, think the debt-driven economic model of the last few decades has run out of steam, and that the world is stuck in a debt trap.

If extreme government debt levels aren’t desirable—and history comes down strongly in favor of this perspective—governments need to do something about it.

To help us dimension the different paths developed economies might follow, we can lay out four historical templates: the UK experience after the Napoleonic Wars; Germany’s Weimar Republic after World War I; the path followed by the US, the UK and other western economies after World War II; and Japan post-1990.

There’s very little appetite for a long period of fiscal adjustment right now, so it’s safe to rule out the belt tightening used to reduce debt from eye-watering levels in nineteenth-century Britain. The path Germany chose to follow in the years after World War I led to a period of vicious hyperinflation—a stark warning of the risks that can emerge when a country monetizes debt by having the central bank finance government spending. This scenario could emerge again if an extreme version of modern monetary theory were rolled out and misused, but we doubt that any country will follow that path in the near future.

This leaves us with two debt-reduction paths. One is the post–World War II formula of strong economic growth, inflation and financial repression (ultralow interest rates).

Trying to gauge which route the world will follow is probably the biggest controversy facing financial markets today. We favor some version of the post–World War II period and higher inflation over the template from post-1990 Japan and deflation. Not only is Japan an outlier in economic history, but rising populism and deglobalization also point toward the first path.

Moreover, we’re starting to see concrete signs of the regime shift needed to underpin higher inflation—the Fed’s recent shift toward average inflation targeting is another important step in this direction.

But we’re not there yet. The final piece of the puzzle is a credible commitment to drive inflation expectations higher. This may involve the abandonment of the inflation targeting regime, which, helped by demographics and globalization, has underpinned the low-inflation era of the last three or four decades.

But we're not there yet