Two Top of Mind Questions in a Volatile Market

To say it has been a rough patch for equity markets would be quite an understatement. The S&P 500 has fallen 21%* since its peak, and bonds have only cushioned part of the blow. As investors watch their investment accounts contract, two questions keep coming to the fore: Should I reallocate from equities and how long will it take for markets to recover?

Should I shift to a more conservative asset allocation?

Many long-term investors hold stock-heavy portfolios—with allocations of 60%–70% in equities and the remainder in bonds and other fixed income. But the tough current stock market environment has some contemplating a more conservative approach. While a higher allocation to cash or bonds may help stem the tide of further losses, it could prove costly for a number of reasons.

First, a more conservative mix will extend the time required to recoup current losses. For example, assume a $1 million portfolio has declined 20% to a value of $800,000. By maintaining a current 70/30 (stock/bond) asset allocation, investors could expect to recover losses in five years in average markets. But by de-risking to 30/70, an investor would extend the time to recover by an additional three years. Even if markets bounce back more quickly, as they’ve done historically, de-risking would double the time to recovery from two years to four.

What about moving to the sidelines altogether? Though it would lessen losses in down markets, sitting in cash also means missing subsequent rallies. Plus, to be successful, an investor must correctly time both the decision when to sell and (typically more difficult) when to buy back in. 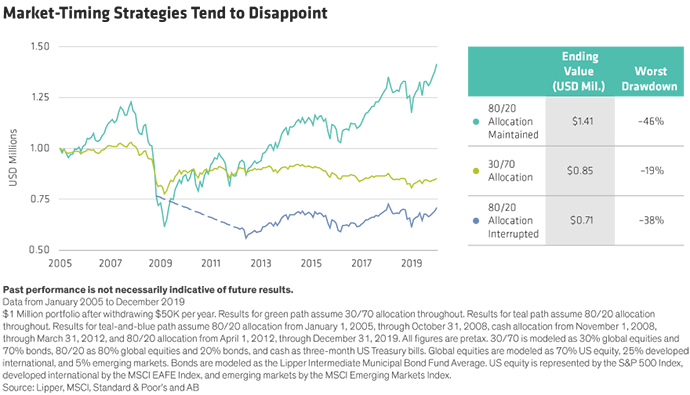 For instance, we compared the growth of $1 million in three different asset allocations† from 2005 through 2019—and noted a significant divergence of wealth over time (Display). The conservative investor (30/70 stocks/bonds) would have avoided excessive losses in the downturn of 2008/2009 but wouldn’t have gained much in the roaring bull market that followed. At the end of the period, he had $850,000. Conversely, the investor who maintained her allocation (80/20 stocks/bonds) endured a 46% loss but benefited from the rebound. She wound up with $1,410,000, the highest of the three.

The worst outcome came from the market-timer who jumped into cash as the market headed south (80/20 Allocation Interrupted). Initially, he was happy with the move as stocks continued to drop. However, because timing is complicated and the decision to re-invest is fraught, he missed the initial market turn. That left him with only $710,000—significantly underperforming the other two allocators.

How long will it take the markets to recover?

The timing and speed of a market recovery are ultimately unknowable. But history can provide some perspective. We analyzed the significant stock market declines since World War II. On average, the market fell 35% over a period of 16 months. For the market to recover to its prior peak, it took an average of 34 months from the onset of the bear market (Display).

Importantly, the first year after the bear market saw an average increase of 44%. That’s why participating in this initial burst is critical—and why a market timer’s decision to buy is equally important as the decision to sell. Failing to participate in the initial market recovery typically leaves an investor worse off.

Timing the Turn Is Difficult…and Costly

Maintaining an allocation can be difficult when markets get tough. Yet so is the alternative. Often, investors miss out on the best days when the market suddenly rallies. Looking back over the last 30 years, the average three-year return on the S&P 500 was 10.7%. But missing the best five days cut that return by 43%.

While the current crisis and economic fallout may continue to deteriorate, markets usually anticipate a recovery before economic indicators clearly show that one is underway. So, while it is nearly impossible to know where we stand, understanding the consequences of market timing remains vital. A long-term plan only works for investors with the patience to stick with it.

Maintaining an allocation can be difficult when markets get tough