Will Investors Step Up to the Plate for Community Banks?

Bank stocks have yet to bounce significantly from March lows. So far, they’ve recouped only a quarter of their losses, while other value sectors, like industrials, materials, and even junk bonds, have fully recovered. The reason is simple—investors are concerned about significant loan losses, with many expecting community banks to replay their performance during the GFC. But this time around, community banks have comparatively stronger balance sheets and are part of the solution, rather than the root of the problem.

Yet despite these sound fundamentals, investors still seem to be missing the boat. What needs to happen for bank stocks to rally?

Investors seem unwilling to forgive banks’ past mistakes. To date, they’ve balked at the regulatory and fundamental changes that have forced the industry to not only regain its footing but establish robust and resilient capital bases. But we believe three near-term catalysts will inspire investors to step up to the plate.

Catalyst #1—Upside Surprise: Earnings reports over the next two quarters should shore up investors’ confidence as early signs suggest that massive loan losses won’t materialize. Forecasts indicate that banks will disclose sharply lower deferral rates of under 5% on average for the third quarter—down by more than 75% from second-quarter levels. Preliminary reports show that as loan payment deferrals expire, repayments are climbing with little corresponding increase in defaults. Lower-than-feared charge-offs over the next few quarters should allow banks to continue enhancing their tangible book value per share (TBV)—a trend that first emerged in the first half of the year.

What’s more, by the fourth quarter, accelerated recognition of Paycheck Protection Program (PPP) origination fees may take investors by surprise, providing an unexpected boost to earnings. This could reinforce that community banks’ profits are poised to grow through this cycle, and push valuation multiples higher.

Currently, community bank stocks are trading below 8x next year’s consensus estimate for EPS (earnings per share)—an all-time low, even compared to the trough multiples briefly touched in 2000 and 2011. In contrast, small-cap stocks broadly trade at 28x, as measured by the Russell 2000 Index. In relative terms, community bank stocks are trading at less than 30% of the index’s price to forward earnings (P/FE) multiple for the first time (Display). We believe earnings developments during the next two quarters will awaken investors and spark the return toward a more typical relative multiple of 67%.

Catalyst #2—M&A Wave: We also expect bank mergers and acquisitions (M&A) to roar back early next year, resuming the secular pace of about one transaction per 25 companies annually. M&A’s importance for community banks cannot be understated—evidenced by the strong correlation between small-bank valuations and the pace of consolidation (Display). 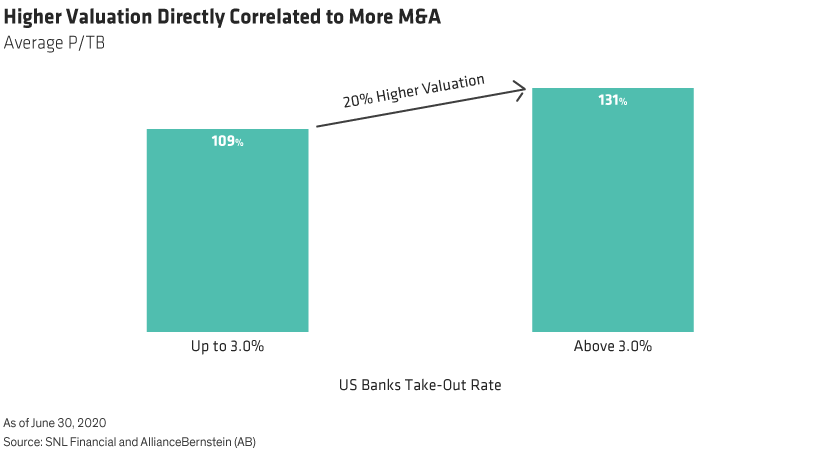 Low interest rates provide a strong impetus for M&A. Faced with a revenue headwind resulting from down-in-the-dirt rates, large and mid-sized banks look to buy smaller institutions and extract savings to the tune of 30%–50% of the target’s cost structure to drive earnings. Low rates also confer another advantage—cheap capital. And even if acquirers don’t want to tap into inexpensive financing, it can still boost synergies by financing the deal with its own stock, which tends to trade at a premium.

A return to an average pace of industry consolidation should drive community bank valuations higher. That’s because they’ve historically received a 30% takeover premium, on average.

Catalyst #3—Return of Natural Buyers: Perhaps the most compelling near-term accelerant is the return of two natural buyers of small bank shares:

Institutional investors: Current restrictions limit investors from buying more than 9.9% of a bank’s market capitalization. But modifications by the Federal Reserve will expand ownership to between 19.9% to 24.9% on October 1. In other words, shareholders with strong conviction can more than double their exposure.

Banks themselves: With growing conviction in their balance sheets driven by PPP origination fees and lower re-deferral rates, banks themselves—particularly community banks that lack the political scrutiny assigned to larger ones—are expected to (re)initiate share repurchase plans. Many small banks have already signaled their play—since August, approximately one-sixth of the community banks and thrifts we follow have either initiated or reauthorized existing share repurchases.

And while these buyers should boost demand, supply is also expected to tighten. Forced selling caused by several institutional funds’ liquidation through the second and third quarters appears done, which should reduce oversupply.

Sometimes spotting the catalysts that can unlock value can be challenging. While we see three compelling ones, convincing investors of three certainties remains key. Investors must believe that banks will remain profitable and won’t need to raise dilutive capital to cover loan losses, that cheap bank valuations will prompt them to buy back their own shares, or that larger banks will be inclined to acquire them at a premium. Fortunately, community banks are so cheap that just one of these eventualities should move the stocks higher. To put this in baseball terms—community banks have the bases loaded. But they don’t need to hit a grand slam— a mere single could start the rally. Will investors step up to the plate?

What will it take for bank stocks to rally?

Investors must believe that banks will remain profitable and won’t need to raise dilutive capital, that cheap bank valuations will prompt share buybacks, or that larger banks will be inclined to acquire them at a premium