Are QSBS Exclusions on the Chopping Block? Not Exactly

While the Build Back Better Act of 2021 and associated tax increases have yet to be finalized, it seems likely that any new legislation will increase the tax burden for investors who sell stock eligible for a Qualified Small Business Stock (QSBS) exclusion.

If you’re an investor or entrepreneur involved with start-up companies and small businesses, understanding the QSBS exclusion is critically important. The IRS provision enables taxpayers to exclude from their gross income all or a portion of the gain recognized from the sale or exchange of stock, if certain conditions are fulfilled. Many states that impose an individual income tax offer similar tax-free treatment.

For a stock to qualify as QSBS, a variety of conditions must be met:

For a deeper dive into these qualifications, check out our earlier articles, Qualifying for the QSBS Exclusion and When It Comes to QSBS, Timing Is Everything.

Assuming a stock meets the QSBS qualifications, investors must satisfy a holding period of at least five years to receive the tax exclusion benefits. The maximum gain exclusion amount for each taxpayer is capped with respect to any one corporation at the greater of a lifetime $10 million or 10 times the initial basis of the QSBS sold by the taxpayer in that tax year.

While the rules governing QSBS may be nuanced and challenging, the tax advantages can be significant.

Will Congress Change the Exclusion Rate—Again?

The exclusion was first introduced in 1993 and has undergone several changes since then. Initially, it excluded 50% of the gain recognized on the sale of QSBS, with the taxpayer paying a 28% federal income tax rate on the non-excluded portion. Over the ensuing years, the exclusion amount was adjusted upwards, to 75% for stock acquired after Feb. 16, 2009, as a response to the credit crisis, and then to 100% for stock acquired after Sept. 27, 2010.

Fast forward to 2021, and another potential shift looms on the horizon. As of this writing, the Build Back Better Act of 2021 has been passed by the House but not by the Senate. In any case, the final bill is likely to include a provision to reduce the exclusion rate back down to 50% for taxpayers with adjusted gross income equal to or exceeding $400,000, and for estates and trusts at any income level. 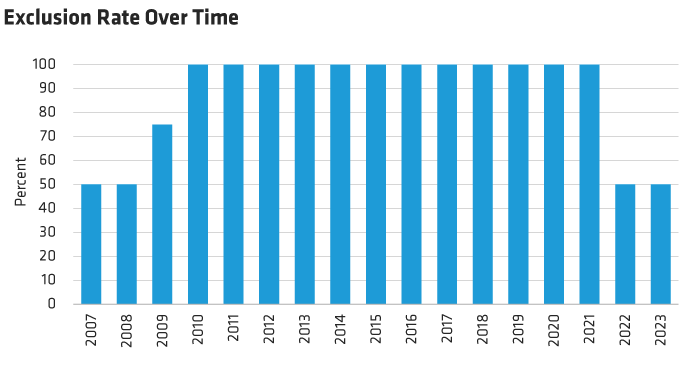 How would this work in practice? Let’s take the example of Sia. She has worked since 2012 as a senior executive at Initech, a successful tech startup that has just received a $250 million bid from a private equity firm. In early 2016, Sia exercised vested stock options at a time when Initech had gross assets under $50 million and was considered a Qualified Small Business. She has held the stock from the option exercise for five years, which means she has the potential to exclude $10 million of her stock gain from federal tax.

However, if we assume the changes proposed for the QSBS exclusion in the Build Back Better Act become law, Sia would be able to exclude only 50% of the $10 million gain recognized if the deal closed after September 13, 2021. The non-excluded portion of her recognized gain would be taxed at a 28% federal income tax rate—regardless of the prevailing long-term capital gains rate at the time of sale, plus the net investment income (NII) tax rate of 3.8%. When combined with approximately 2% in AMT taxes on the excluded amount, this would create an effective tax rate of ~17%. The resulting tax bill would be $1.7 million on the first $10 million of gain, still significantly better than the $2.4 million in federal taxes she would have expected to pay without any QSBS exclusion.* 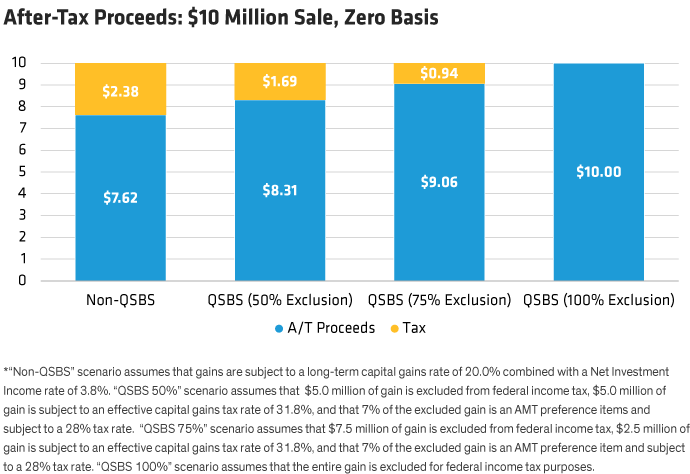 The QSBS exclusion can be enormously valuable for founders, investors, or employees with an investment in an emerging company. Whether or not the rates change going forward, such individuals would be well advised to understand this exclusion and the nuances in its requirements. These details may impact your decisions around initial business formation, along with when to exercise options or time the sales of company stock. Keep in mind that the rules surrounding the QSBS exclusion are complex. It is critical for clients to partner with tax, legal, and financial professionals who are familiar with these rules, who can help capture (and maximize) the opportunity.

QSBS enables taxpayers to exclude from their gross income all or a portion of the gain recognized from the sale or exchange of stock if certain conditions are met.

The Build Back Better Act will likely reduce the allowable QSBS exclusion from 100% to 50% for deals closed after September 13, 2021.

QSBS rules are complex, so clients should consult with tax, legal, and financial advisors who can help maximize the exclusion.