The Times They Are a-Changin’: Should Your Inflation Hedge Change, Too?

Investors today are wrestling with a multitude of complex issues, including one that hasn’t made the list in a long time—a worrisome return of inflation. Our latest research makes the case for a multi-asset approach when it comes to hedging inflation risk, as we brace for a less benign environment in the coming decade. We expect classic inflation hedges—such as TIPS, commodities, natural resources, and real estate—to continue playing a vital role. But with several macro changes afoot, a conventional multi-asset solution will no longer suffice to guard investors’ portfolios.

In our view, two major secular trends call the timeworn inflation playbook into question. The climate-driven global transition to a low-carbon economy and the decades-long secular shift from a manufacturing-based to a service-based economy in developed markets both require next-generation solutions.

In short, the times they are a-changin’ and investors need to evolve, too.

Inflation Hedges in a Low-Carbon Economy

The energy transition to address climate change is perhaps the greatest externality the world has ever faced, demanding collective action across governments, companies, and consumers. The shift is likely to fuel inflation in ways not seen in the past—potentially costing governments, companies, and consumers trillions to reduce our current carbon footprint while installing new low-carbon capacity for future production. And the move is likely to be multi-pronged, encompassing electrification, a shift to renewables for power production, and increased adoption of alternative fuels such as hydrogen, along with carbon capture and storage.

How might this shape the outlook for traditional commodities? The impact isn’t as straightforward as it might seem:

Looking past their existing allocations, investors could go a step further by considering “transition” hedges. For instance, allocating to companies producing low-carbon solutions like wind and solar—or producers of materials crucial to development of batteries and energy storage solutions or improvements in agricultural productivity—could help guard against climate-induced inflation risk (Display). 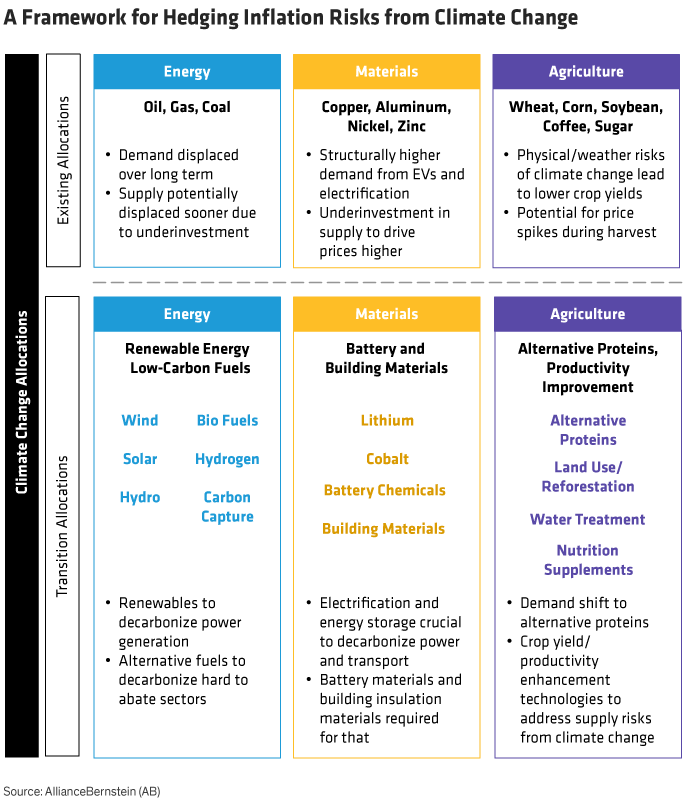 And the climate-driven transition isn’t the only macro shift underway. Investors must also contend with the secular and ongoing move away from a developed economy driven by manufactured goods to one dominated by service-driven activity (Display). 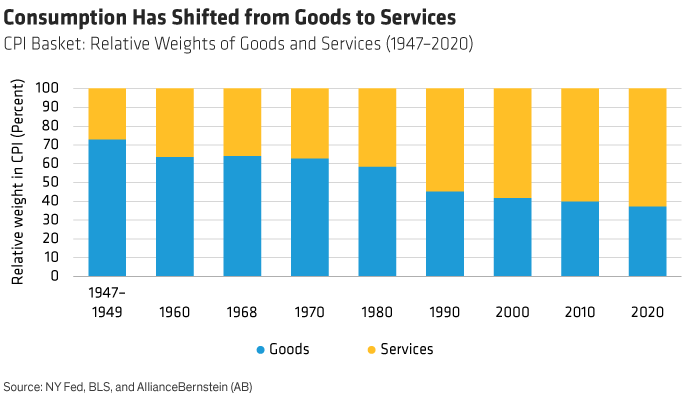 Why does this matter from an inflation perspective? Since services are more labor intensive, a larger share of services in the consumption basket means higher sensitivity to wages. There is also a feedback loop between rising inflation expectations and wages. As price increases ripple through the economy, workers demand higher wages and firms hike prices to absorb rising wage costs. In turn, as inflation expectations rise, workers anticipate higher wages (the so called “wage-price” spiral at its extremes). To protect their portfolios, investors must focus on companies with pricing power—inflation-sensitive stocks that benefit from rising prices without losing market share (Display).

Another way to hedge against these risks would be to gain exposure to the market’s pricing of inflation risks using derivatives such as Consumer Price Index (CPI) swaps. An inflation solution focused on pricing power overlayed with a CPI swap is likely to achieve a more balanced inflation hedging profile—with one caveat. While commodities and goods represent a smaller share of CPI, they still drive much of the volatility and inflation surprises, so they still play an important role in hedging against unexpected bouts of inflation.

Now is the time for investors to assess their sensitivity to inflation and take steps to insulate their portfolios. Unlike prior cycles, the source of rising price pressures will look different this time and require a different playbook. Your Bernstein Financial Advisor can help you identify vulnerabilities and devise solutions to address inflation risks in the years ahead.

With several macro changes afoot, a conventional multi-asset solution will no longer suffice to guard investors’ portfolios against inflation risk.

The global transition to a low-carbon economy and the ongoing shift from a manufacturing-based to a service-based economy both require next-generation inflation solutions.

Unlike prior cycles, the source of rising price pressures will look different this time and require a different playbook.