You Just Sold Your Business. How Can You Reduce the Tax?

Tax rates are at the forefront of many Americans’ minds, with possible large hikes looming affecting both income and capital gains. One group paying keen attention? Business owners who have either just sold a business or are planning to. With advance planning, most owners can make moves prior to selling that will result in tax savings. But not everyone has the foresight—or, in the case of lucrative unsolicited offers—the luxury to plan ahead.

Consider the Cashers, a 60-year-old couple we previously helped with deploying their cash windfall from the sale of their business. After solving this conundrum, the entrepreneurial pair asked us to tackle a new challenge, “How to reduce their income tax liability from the sale?”

What’s in Your Toolbox?

Having sold their business for $26.8 million pretax—and establishing a core portfolio of $14.9 million and surplus portfolio of $7.1 million1—the Cashers turned to other pressing matters. Namely, how could they minimize the $6.8 million income tax liability stemming from the sale2 and transfer wealth to their children and charitable causes.

There are many ways to reduce income taxes after selling a business. And as with most projects, one tool might not be right for every job. To help the Cashers, we identified several compelling options:

Let’s look at each of these in turn.

Charitable Giving through a DAF

Giving back to the community is something many business owners cherish. And the Cashers were no different. The couple had typically contributed $50,000 per year to charity and wanted to continue those gifts going forward. However, they also wanted to make a substantial $1 million gift to a donor-advised fund—a low-cost, highly flexible way to make a charitable donation while gaining tax advantages. How should they go about it given their changed financial picture?

The Cashers had saved $2 million before exiting the business, of which $1 million was held in a taxable portfolio. For simplicity’s sake, they planned to use the cash from the sale to make the gift—until we suggested a better approach. Donating stock instead of cash would make a significant difference in tax savings.

Not only did this move reduce the Cashers’ income tax liability by $370,000 thanks to the tax deduction benefit, but it also allowed them to avoid the $500,000 of unrealized gains on the stocks they donated (which will be sold in the DAF). Yet even after funding the $1 million gift, they still wanted to enhance their charitable legacy by continuing to give $50,000 per year to the DAF. Should they still make this gift annually? Or explore another route?

One option was a grantor charitable lead annuity trust (CLAT)3, which would provide an income tax deduction for making a large irrevocable gift. The trust would distribute all its principal plus interest over time to one or more qualified charities of their choice, or to their DAF. At the end of the CLAT term, whatever remains in the trust could be transferred to the Casher’s children or to a family trust, free of estate taxes. What makes CLATs particularly attractive today as a wealth transfer vehicle is that the hurdle rate4 is very low from a historical standpoint. This enhances the potential for transferring wealth to your heirs.

For the Cashers, the CLAT could be funded with exactly $902,300,5 allowing $50,000 to be transferred annually to either their chosen charity or their DAF for 20 years. Alternatively, at the same funding level, annuity payments could be structured to increase by a certain percentage each year (e.g., 20%, 30%, etc.) allowing more assets to stay in the CLAT longer.

Ultimately, the Cashers decided to structure the CLAT with cash from the sale and have the annuity payments increase by 20%. Doing so provided two advantages: The couple improved their chance of transferring wealth to their children while boosting the amount they could transfer to noncharitable beneficiaries from $600,000 to $1.0 million.6

While this meant less funding for their DAF early on, that trade-off made sense given their $1 million gift to the DAF either way. Finally, because the $50,000 was already baked into the Cashers’ $400,000 of annual spending, the $902,300 they will use for the CLAT would be sourced from their core capital. Utilizing the grantor CLAT reduced their income tax obligation from the sale by an additional $334,000. When combined with the $1.0 million gift to the DAF, they ended up lowering their tax liability from $6.8 million to $6.1 million (Display).

Still, we asked: Could they do better? 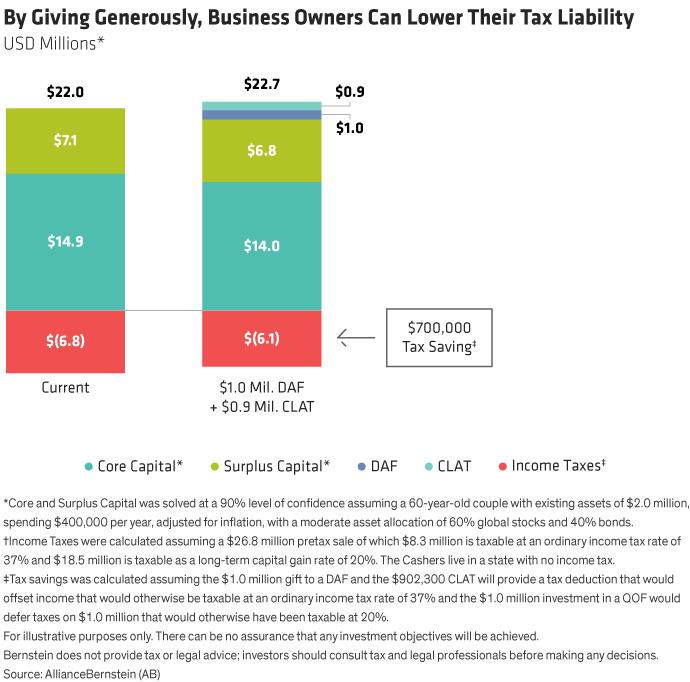 The answer was “yes,” by investing in a Qualified Opportunity Zone (QOZ), an economically distressed area that meets certain low-income criteria designated by the US Treasury Department. A QOZ would allow the Cashers to defer capital gains realized from the sale of their business by investing them in a Qualified Opportunity Fund (QOF), as long as the investment falls within 180 days of the date the gain was realized.

By utilizing the QOF, the Cashers could receive temporary deferral of federal income tax on the gains until December 31, 2026, and a reduction in taxes on the deferred gain of 10% if an investment in the QOF was held for at least five years. Finally, any future appreciation of the QOF investment would not be subject to federal income tax if held longer than 10 years, subject to additional requirements.

After finding a QOF that generated attractive returns, the Cashers decided to invest $1 million of their gains in the fund. This resulted in an additional $200,000 of taxes due to their initial sale being deferred. Knowing they would hold this investment for five years and would receive a 10% basis step-up, they decided to set aside $163,0007 in a conservative portfolio to be used for the tax payment due on December 31, 2026. This strategy, combined with the charitable strategies (the DAF and the CLAT), lowered their initial taxes due to $5.9 million, a decrease of 13% (Display). 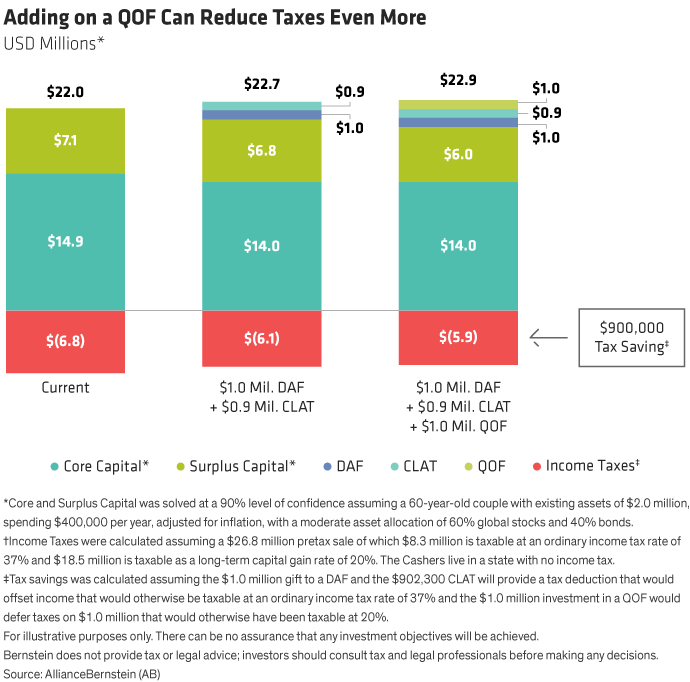 What if tax rates increase? President Biden’s American Families Plan could propel capital gains rates from 23.8% to 43.4% for taxpayers with over $1 million of income. That would lower the benefit of a QOF, assuming the taxpayer would otherwise be able to pay at 23.8%. Fortunately, a sound investment can overcome the extra tax hurdle, offering a 10% benefit if the couple held the investment for 5 years; if held for 10 years, any gains within the fund itself could be avoided.

What would the impact be on state taxes?8 Luckily for the Cashers, they lived in a state without an income tax. But not all states conform to QOZ tax rules. California and New York, for example, do not and would require the taxpayer to still pay state income taxes even if they invested in a QOF.

A Range of Tax Saving Options

Beyond the sale of their business, the Cashers also wanted to minimize their taxes going forward. So we recommended adding a “tax-loss harvesting” portfolio to their repertoire. Ultimately, entrepreneurs looking to minimize taxes have many tools at their disposal. In the Cashers’ case, by utilizing a $1 million DAF, a $902,300 CLAT, and a $1 million QOF investment, they were able to lower their taxes by nearly $900,000. Your Bernstein Financial Advisor can recommend the right combination of strategies for you.

1Core and surplus capital was solved at a 90% level of confidence assuming a 60-year-old couple with existing assets of $2.0 million, spending $400,000 per year, adjusted for inflation, with a moderate asset allocation of 60% global stocks and 40% bonds.

3A grantor CLAT is a grantor trust, and the grantor is responsible for any income tax generated by the assets in the trust. In the year he or she makes a contribution to the CLAT, the grantor receives a charitable income tax deduction based on the size of the contribution; the deduction can be carried forward for five years. Source: IRS and Bernstein

4The IRS Section 7520 rate is the “hurdle rate” that applies when calculating the annuity payments to charity of a newly established CLAT.

6Based on median outcomes from Bernstein’s proprietary Wealth Forecasting analysis.

With advance planning, most owners can make moves prior to selling that will result in tax savings.

But not everyone has the foresight—or, in the case of lucrative unsolicited offers—the luxury to plan ahead.

There are many ways to reduce income taxes even after selling a business; an astute financial advisor can identify the optimal solutions for you.