COVID as a Catalyst: The End of the Era of Good Macro?

This is the first topic in our COVID As a Catalyst series. You can read the introduction to the series, laying out our initial thoughts across several key themes here.

After decades of “good macro”—low inflation, falling interest rates, and stable growth—have the risks of entering a period of “bad macro” increased due to the coronavirus? The consequences of such a shift would be pernicious, negatively affecting both the real economy and the financial markets.

While many parts of the global government response to coronavirus have underwhelmed expectations, one area has stood out as a significant positive surprise—the speed and magnitude of fiscal and monetary policy responses. Major countries around the world are implementing trillions of dollars of deficit-funded government spending to dampen the blow from the coronavirus. This has been matched with a stunning amount of cash being injected into the system by the Federal Reserve and other central banks to prevent the crisis from infecting the financial system and becoming even more severe. (Display)

The Return of The Bond Vigilantes?

Those actions do not come without risks and consequences of their own. Most notably, the significant rise in government deficit spending—which could take the US to levels of debt-to-GDP not seen since the end of World War II—may increase the risk of serious inflation in the longer run and bring about the return of the “bond vigilantes” who have been largely absent since the 1980s (Display). Some investors, many of whom were already quite vocal on this issue, now see that looming on the horizon.

We’re cognizant of the risk but remain sanguine. And we’re not the only ones. Fed Chair Jay Powell, when asked whether he was worried about stoking inflation or an asset price bubble, emphasized that inflation has been hard to generate since the Global Financial Crisis and that “one thing [he is] not worried about right now is inflation.” In fact, in many ways, the government is trying to fill a hole of lost production and inflation—were they to do nothing, the damage would be significant and leave lasting scars on the economy.

The current debt- and deficit-fueled inflation argument is quite similar to the ones that emerged as a response to the stimulus measures taken during the Global Financial Crisis and the growth of Japan’s money supply and deficit over the past several decades. While this time could be different, the reasons that the argument missed the mark then should inform our view now.

Perhaps most important in this is the fact that inflation expectations in the US are extremely well-anchored after decades of action by the Federal Reserve to hike rates in the face of rising inflation. Though not indestructible, that anchoring will prove difficult to break.

Put simply, Americans aren’t used to inflation, so they don’t feed into it. It would take a serious shock to expectations to create an inflationary spiral.

Nonetheless, there are still reasons to be cautious over the long run:

There are also reasons to believe inflation is not a serious risk just yet: 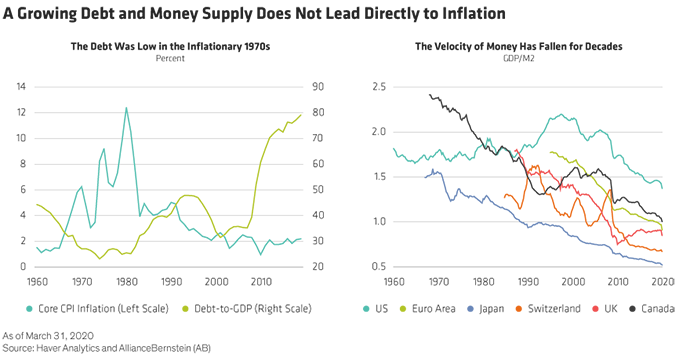 Inflation is effectively a hidden tax, but the most obvious way to bring down the elevated debt levels would be an explicit tax. While we expect certain policymakers to strongly resist tax hikes and push for spending cuts instead, the 2017 tax cuts could see themselves back in the spotlight. That would have serious implications for corporations, wealthy individuals, and the value of stocks. Some economists on the left, like Thomas Piketty, have also taken this opportunity to reiterate their calls for a wealth tax, highlighting major wealth taxes in Germany and Japan to address their large debt levels following World War II.

Which of those two is more likely—inflation or taxes—depends highly on politics and the strength of government institutions. Members of Congress may think it easier to be reelected if they pass the buck to the Fed. Over the past several decades, the Fed’s independence has meant that it has tamped out inflation by raising rates, even if that’s meant putting the economy into a recession. If elevated debt levels or political considerations threaten that independence and fiscal and monetary policy become fully joined at the hip, as AllianceBernstein’s economics team has labeled it, that could tilt the economy in an inflationary direction. On the other hand, thinking about it from a congressperson’s perspective, inflation is particularly hard on retirees, the proportion of retirees in the economy is set to grow, and retirees turn out to vote.

What Happened To Secular Stagnation?

Finally, we remember it was only a few months ago that we were being asked about secular stagnation—would the equilibrium real policy rate in the economy become so negative and inflation expectations so low that nominal interest rates couldn’t be cut enough to stimulate the economy? What we noted was that we have one thing working in our favor in avoiding secular stagnation—people are irrational. They can be short-sighted and don’t adjust their spending downward with the idea of eventually having to pay back tax cuts or government checks. As a result, more aggressive fiscal policy and even “helicopter drops of money” can become a powerful tool to stimulate the economy. It occurs to us that that’s similar to what policymakers are doing now—and if the purpose of it is to pull us out of a potential liquidity trap caused by a spontaneous shock, then perhaps it’s just the right medicine for our economy and the long-run side effects may be milder than some people believe.

On balance, we recognize the risks of inflation but believe they are unlikely to materialize in the near future, weighed down by low demand and high unemployment. Furthermore, there is time and there are actions that the Fed and Congress can take to prevent inflation from spiraling down the road.

We carefully monitor inflationary risks because they can wreak havoc for investors. US-based investors have benefited significantly from a “good macro” regime in recent decades. Should that deteriorate and become a “bad macro” environment, the prices of financial assets (including both stocks and bonds), would suffer and many diversifying assets and strategies would no longer work as well as they have in the past. Because of the serious consequences if that type of regime change were to occur, we encourage flexibility and frequent reassessment of asset allocations.

Decades of low inflation, falling interest rates, and stable growth may be at risk due to the coronavirus